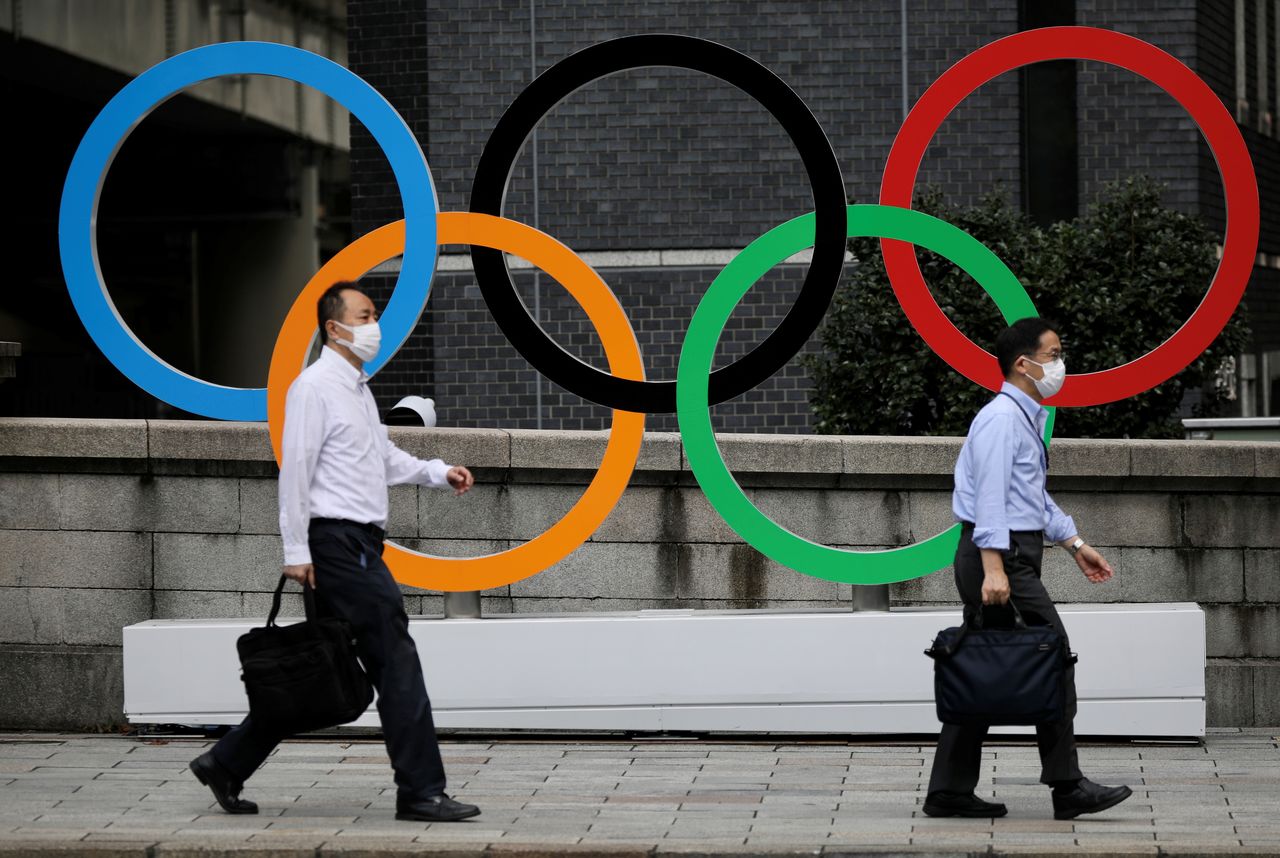 Men walk past the Olympic Rings in the commercial district of Nihonbashi during the Olympic games amid the coronavirus disease (COVID-19) outbreak in Tokyo, Japan August 4, 2021. REUTERS/Kevin Coombs

By Ami Miyazaki and Linda Sieg

TOKYO (Reuters) -Japan decided on Thursday to expand its COVID-19 emergency curbs to cover more than 70% of the population, as a record surge in cases strained hospitals in the Olympics host city Tokyo and other parts of the country.

Suga announced the new steps - which are mostly voluntary, unlike strict lockdowns overseas - as new daily cases in Tokyo hit a record 5,042. Nationwide new cases topped 15,000 for the first time, while medical advisors to the capital said the Tokyo figure could double in two weeks, NHK public TV reported.

"The situation on the ground (at hospitals) is extremely severe," Economy Minister Yasutoshi Nishimura told a panel of experts before Suga's formal announcement. He said serious cases had doubled in the past two weeks.

The panel signed off on the proposal to declare "quasi-emergencies" in eight more of Japan's 47 prefectures. But Nishimura told a news conference some members had said the situation was severe enough to require a nationwide emergency.

Suga told reporters the government was "not considering that now" and would focus on hot-spot areas.

Six prefectures including Tokyo are already under full states of emergency to last through Aug. 31 and another five are under less strict directives, meaning just over half the population is covered by some restrictions.

Both types of curbs have recently focused on asking restaurants to close early and stop serving alcohol while urging people to stay at home as much as possible. Suga on Thursday also asked people to refrain from travel during summer holidays.

The latest steps, to take effect from Sunday, mean that more than 70% of the population will be under some form of restriction. Criticism of Suga, his ratings already at record lows, is growing over his handling of the pandemic.

The government says the Olympics has not caused the latest surge but experts say holding the Games now has sent a mixed message to an already weary public about the need to stay at home.

It remains to be seen whether the latest COVID-19 restrictions, which are mostly voluntary, will have much impact as the highly transmissible Delta variant spreads.

"I do not think that more (quasi-emergency steps) will make much difference - (it's) simply a political statement," said Kenji Shibuya, former director of the Institute for Population Health at King's College London.

The latest expansion follows a backlash against Suga's plan to limit hospitalisation of COVID-19 patients to those who are seriously ill and those at risk of becoming so. Others are told to isolate at home.

The shift is intended to address a hospital bed crunch, but critics say it will lead to an increase in deaths since the condition of patients can worsen rapidly.

In response to criticism from within and outside his ruling coalition, Suga said on Wednesday the change was aimed at regions suffering a surge in COVID-19 cases, such as Tokyo, and was not nationally uniform.

On Thursday, he appeared to back-pedal further, saying moderately ill patients in need of oxygen treatment would be admitted to hospital and doctors would make final decisions.

The backlash is another blow to Suga before a ruling party leadership race and parliamentary election this year.

Just under 31% of residents of Japan are fully vaccinated. With 15,221 deaths recorded as of Wednesday, the COVID-19 mortality rate was about 1.6%, in line with the United States.