KAWAGOE, Japan (Reuters) - Nelly Korda ignited the Olympic golf with a second round 62 in sapping heat on Thursday to put the United States top of the leaderboard by four strokes as a storm forecast threatened to cut the tournament short.

With the temperature topping 30 degrees Celsius (86F), world number one Korda caught fire at the Kasumigaseki Country Club, flirting with the magical 59 after nine birdies and an eagle heading up the 18th.

She needed one more birdie to join Annika Sorenstam in the record books on 59, 20 years after the Swedish great's groundbreaking day in Phoenix, Arizona, but she stumbled with a double-bogey six to finish on nine-under-par.

"I think when people ask me if I prepare more or put more meaning than normal (into) majors or Olympics or whatever, I say, 'no', because I go into any type of an event with the same demeanour and the same goal," Korda told reporters.

Sweden's overnight leader Madelene Sagstrom (68) was fifth on eight-under, while Japan's Mone Inami was a stroke further back after a 65.

An approaching tropical storm forecast to hit on Saturday prompted organisers to consider cutting the event to 54 holes.

"We continue to track the tropical storm which is expected to affect our area beginning Saturday through Sunday," the International Golf Federation said in a statement.

"If we are unable to start or complete 72 holes, the Women's Olympic Golf Competition will revert to a 54-hole event," the federation said.

If the event is shortened, Korda's Thursday thriller could prove decisive in the chase for a gold medal and a family heirloom to compare with her father Petr's Australian Open tennis trophy.

"Whatever happens, happens. But I'm not going to set my mind that it's going to be less than 72 holes right now," she said.

Some golfers, however, were feeling baffled.

"I'm not super happy about it. Not that you change things, but it gives you one less day to move up to have a chance," said Canada's Alena Sharp after she finished the Thursday round with three over par total.

After opening with four straight pars, Korda set the course ablaze from the fifth, notching four birdies and an eagle on the sixth to round the turn at 30.

Drawing breath with pars on 10 and 11, she renewed her onslaught from the 12th with another five birdies in six holes.

Having seemed unstoppable, she hooked her tee-shot into rough at the 18th and effectively gave up the record bid by bunting her recovery into the fairway rather than shooting for the green.

Her third shot found a greenside bunker and she slid a bogey putt past the hole to give her rivals a better chance of catching her on Friday.

New Zealand's former world number one Lydia Ko (66), the silver medallist at Rio, three-putted her last two holes for bogeys to fall back to five-under, eight behind Korda.

Rio bronze winner Feng Shanshan of China shot a 64, 10 strokes better than her opening round, to sit nine off the pace, while 2016 champion Park Inbee is 10 behind after a grinding 70. (This story fixes typo in paragraph 9) 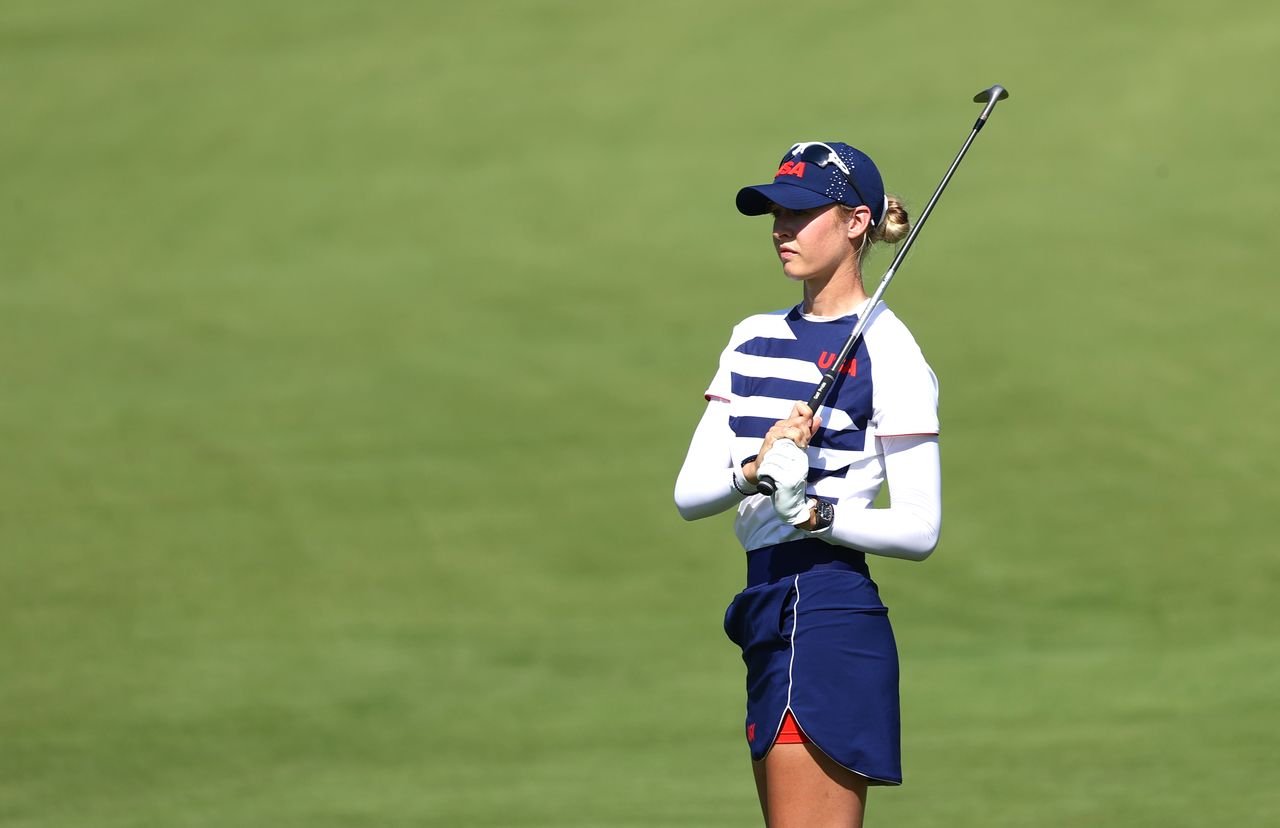 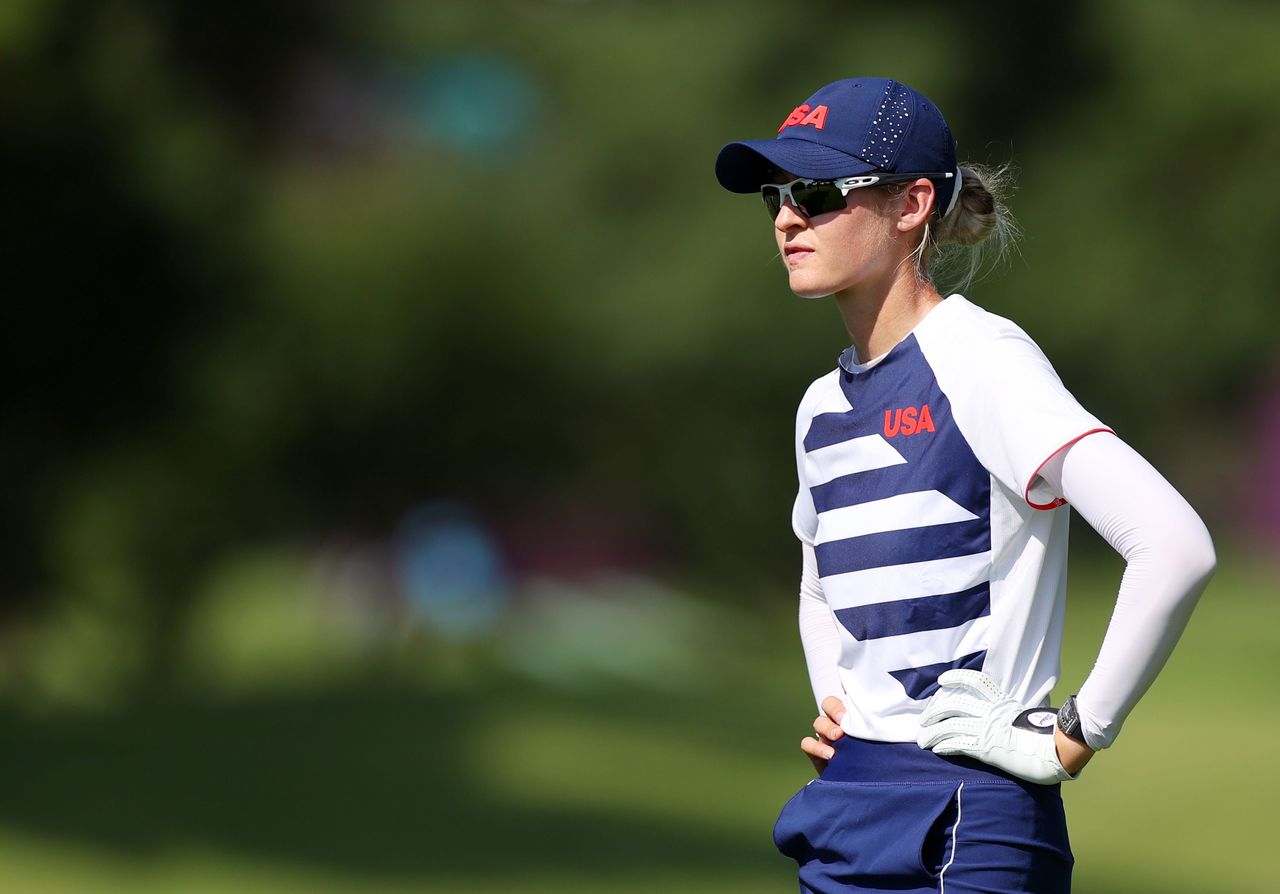 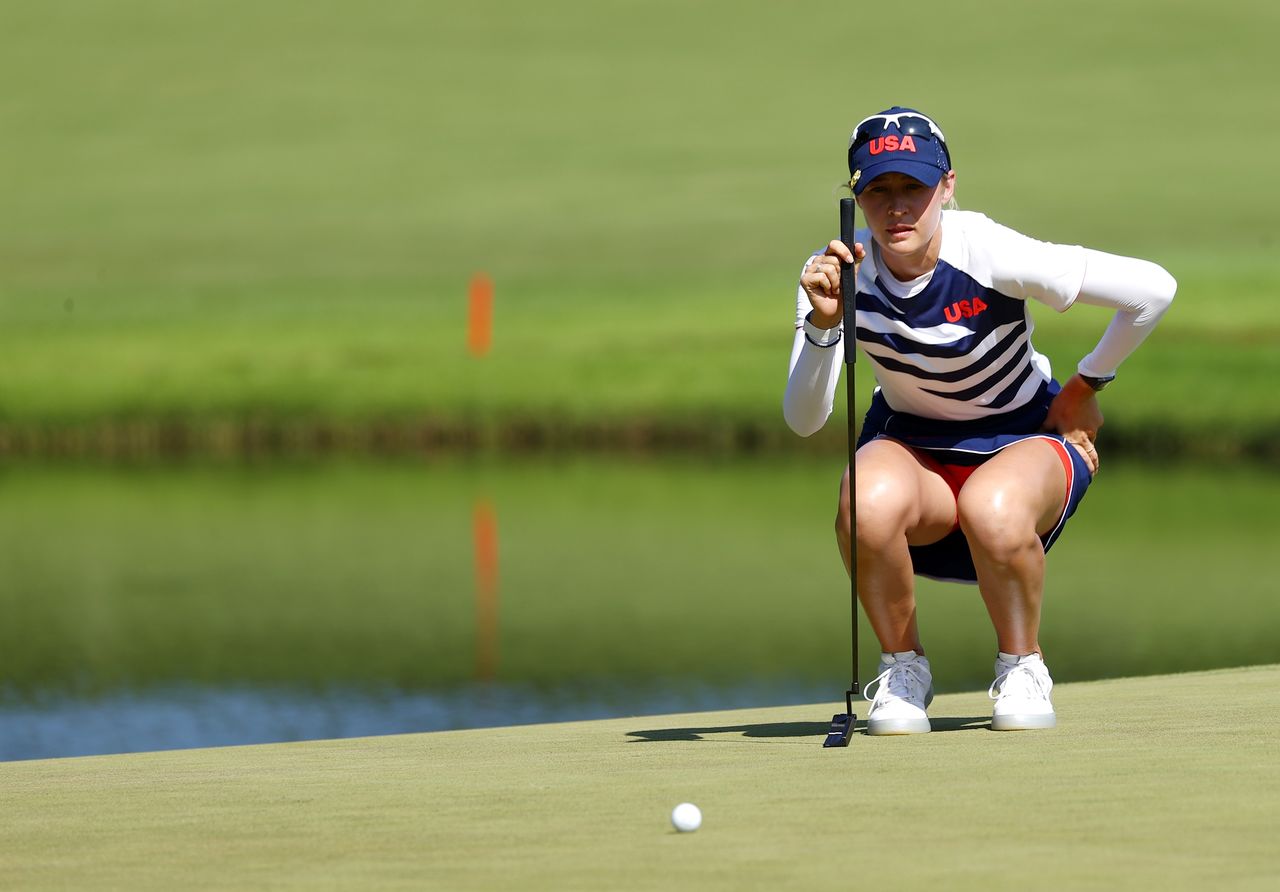