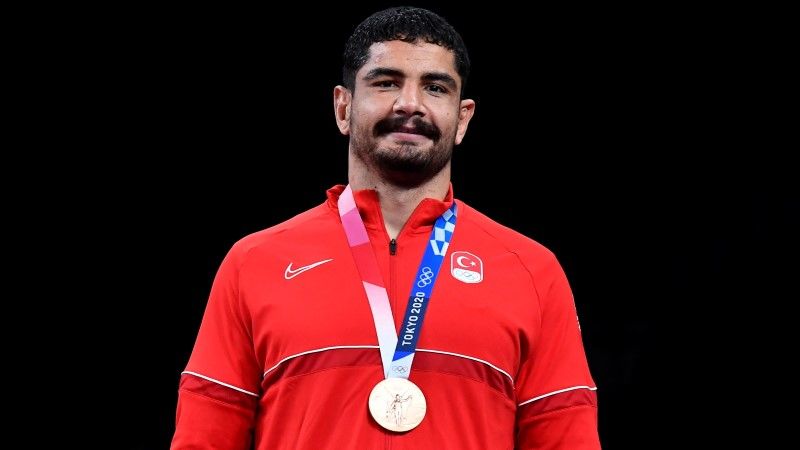 TOKYO (Reuters) - Rio 2016 gold medalist Taha Akgul of Turkey said he considered "hanging up the boots" after failing to retain his title in Tokyo, losing to gold medal winner Gable Steveson in the second round of men's super heavyweight competition.

Akgul said he had a dark time on Thursday.

"I sat down and thought long and hard, and I had very dark thoughts. I thought I should hang up my boots, and there would be no return if I made that decision," Akgul told Reuters following the medal ceremony late on Friday at the Makuhari Messe Hall near Tokyo.

"I am not that sort of an athlete. I may get defeats, I have been defeated many times, but I always give my rivals a hard time. Not this time. It's not me," Akgul said.

Akgul added that winning the bronze medal on Friday was a strong boost of morale for him, and that he would continue wrestling, eyeing another medal at Paris 2024.

Steveson has repeatedly said Akgul was his favourite wrestler. On Friday, Steveson reiterated his respect for the two time world champion, saying that he grew up watching Akgul and Georgia's Geno Petriashvili, the silver medalist at Tokyo.

Akgul said, despite the defeat, he was happy to have welcomed a new fierce competition to the wrestling world.

"He (Steveson) came to me and said I was his favourite athlete, someone who looked up to. We agreed to exchange singlets, it will be a good memory."

"I am looking forward to playing against him again and winning the revenge match. I will train accordingly. He is a great wrestler. There is a new hero in town."