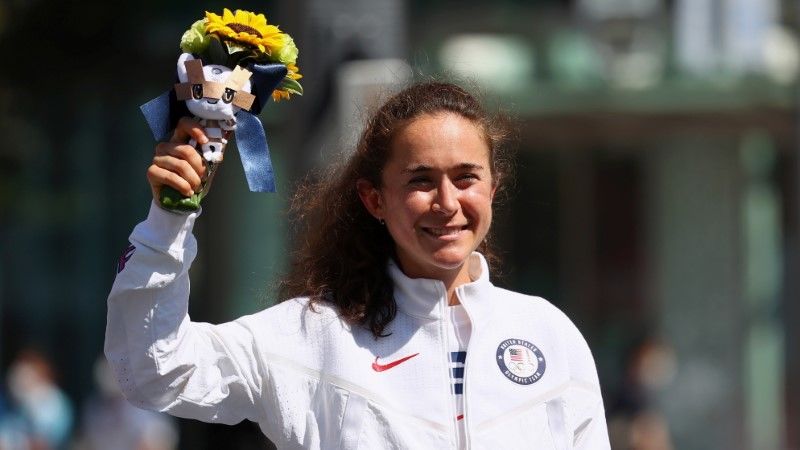 SAPPORO, Japan (Reuters) - Molly Seidel may have been competing in just her third marathon but the American relished the role of disruptor as she ran alongside the sport's elite and took bronze in the Olympic women's event on Saturday.

Seidel, who switched from shorter distances and debuted at the U.S. trials in Atlanta last year, had not made any prediction lists in a field led by heavyweights like Kenya's Brigid Kosgei and Ruth Chepngetich, the world champion.

"I was really trying to keep an open mind. I had the same goal that I had going into the U.S. trials of just, stick my nose in it, don't be afraid if you're up in the front," Seidel said.

"I think my goal today was just go in and have all of these experienced marathoners be like, 'who the hell is this girl?'"

They know who Seidel is now, after she became the third U.S. woman to get a medal in the event after gold medallist Joan Benoit in 1984 and bronze winner Deena Kastor in 2004.

Seidel, 27, did confess to a moment of awe as she was running alongside world record holder Kosgei.

"I was a little bit star struck, I look up to these guys a lot," she said with a laugh.

"A lot of it is just trying to stay calm and not try to think like, oh my gosh, you're running with the fastest women in the world. It's just trying to be like, focus on your race."

Seidel said she was feeling good after the halfway mark and started to believe.

"Rather than just following along I wanted to be making moves, be aggressive and pushing it a little bit," she said.

"I think there is a little bit of tactics in these races, pushing it around the curves, being a little bit of a bulldog out there and not letting people roll all over you," she added.

Seidel finished in 2:27:46, 26 seconds behind winner Peres Jepchirchir of Kenya.

Seidel said she now loves the marathon although she is still keen to take part in shorter distances as well and is not ready to think about her goals just yet.

"I'm just taking it one day at a time. I'm having a beer tonight," she said with a smile.

"We'll see what the opportunities are, just keep an open mind, stay humble. This doesn't change anything. I'm still just an idiot kid who goes out and loves running."