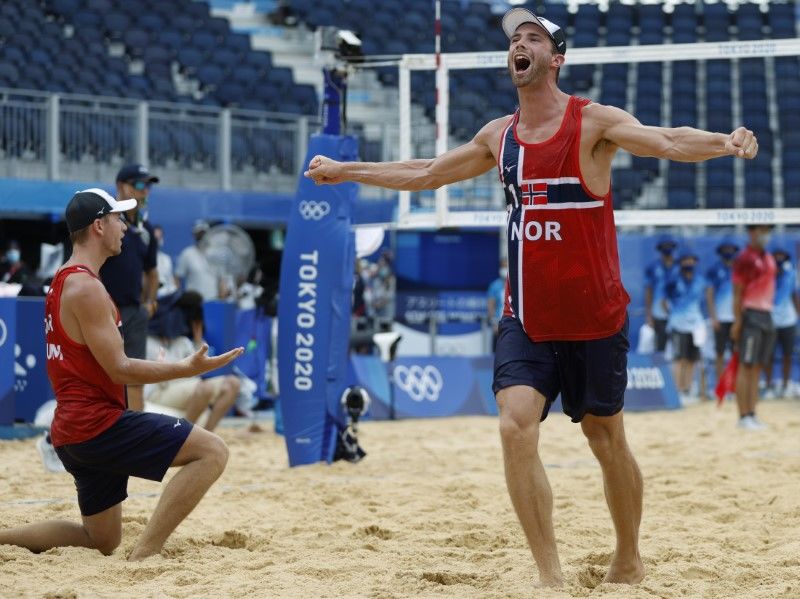 TOKYO (Reuters) -Christian Sorum and Anders Mol won gold in the men's beach volleyball at the Tokyo Games on Saturday to give Norway its first Olympic medal in the sport.

The Norwegians beat Viacheslav Krasilnikov and Oleg Stoyanovskiy of the Russian Olympic Committee (ROC) team 21-17 21-18 in the final, while Qatar's Cherif Younousse and Ahmed Tijan finished third to take the bronze medal.

The winning point came as a Russian serve got caught in the net, prompting Mol and Sorum to shout in triumph, take off their shirts and raised their fists in victory.

The pair then celebrated with the Norway delegation before the rain started to come down heavily in the Tokyo Bay area, a welcome break from the earlier scorching temperatures at the court.

"We have been working so hard and so long, and it's been so many years," Mol, 24, told reporters. "Becoming the youngest Olympic champions (in the sport) is really a dream come true."

Asked about their plan for Paris 2024, Mol said nothing had been decided yet.

"We are trying to enjoy the moment, and we don't plan anything for the future. We just finished the final, so we just think about this time and focus on the next tournament," he added.

The Qatar duo delivered powerful spikes and relentlessly blocked those of their opponents to win 21-12 21-18.

Rap and hip-hop music echoed through the venue and while there was no spectators there to enjoy it the countries' delegations did their best to create an atmosphere, with the stand adorned with a big national flag of Latvia.

On Friday, April Ross and Alix Klineman won https://www.reuters.com/lifestyle/science/beach-volleyball-swiss-women-beat-latvia-duo-win-bronze-medal-2021-08-06 the women's gold medal for the United States, the birthplace of beach volleyball.