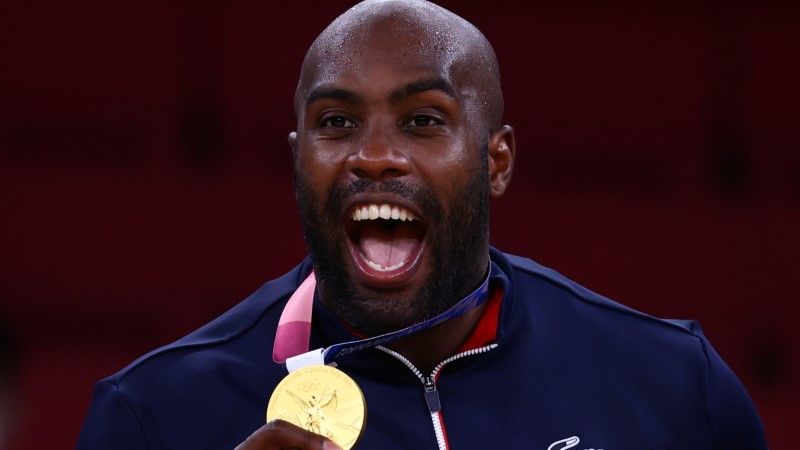 TOKYO (Reuters) - Japanese judokas achieved a record gold medal rush for the host country at the Tokyo Games, but it was France's Teddy Riner who stole the show at the home of judo in the end.

Of the 14 weight categories for the men and women, Japan won nine golds, a silver and a bronze in the individual contests in Tokyo - a record haul since judo became an Olympic event for men in 1964 and for women in 1992.

However, the feeling of exaltation among Japanese judokas quickly faded after they suffered a shock loss https://www.reuters.com/lifestyle/sports/judo-japan-france-compete-gold-first-judo-team-event-2021-07-31 against Riner-led France 1-4 in the mixed team event on the final day of the judo contest.

"This is the reality in the world. The world of judo is evolving fast," Kosei Inoue, the head coach of the Japanese judo national team, told reporters.

"I'm really frustrated as we ended up in the second place and couldn't live up to expectations, although I'm the happiest man on earth to have worked with such wonderful athletes."

Japanese judokas have a big job to do if they want to outperform their Tokyo Games results at the Paris 2024, he added.

Confronting Japan will likely be French judokas led by Riner, who plans to return to the mat for his fourth Games in his home country.

The 32-year-old French heavyweight legend had to settle for the bronze medal https://www.reuters.com/lifestyle/sports/judo-frances-riner-suffers-shock-defeat-hunt-3rd-straight-judo-gold-2021-07-30 after failing to win a third consecutive Olympic gold in the men's +100kg individual contest against Tamerlan Bashaev of the Russian Olympic Committee.

A win at Tokyo's Budokan, the arena built to host judo's debut at the 1964 Games, would have matched the record held by Japanese great judoka Tadahiro Nomura.

Still, the French win in the team event helped bring Riner a tally of three golds and two bronze medals from his Olympics appearances. Riner said he was happy to win both bronze for the individual and gold for the team event.

"It's my third Olympic gold medal, my fifth medal at an Olympics. I think this is very, very... important to win here in the country of judo during the Olympic Games in Tokyo at the Budokan. It's just amazing," Riner told reporters.

"This is a dream, we win the final (against the) Japanese team. Wow."