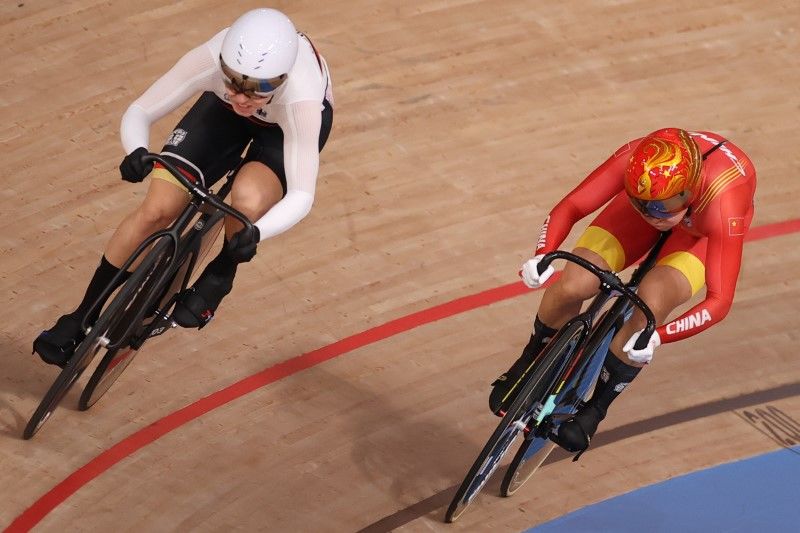 Hinze had failed to light up the Izu Velodrome so far this week, despite having taken world titles in the individual sprint, team sprint and keirin events last year.

Along with compatriot Lea Friedrich, Hinze took silver behind China's Zhong Tianshi and Bao Shanju in Monday's team sprint final before failing to qualify for the medal rounds in the keirin discipline on Thursday.

After showing signs of returning to her best in Friday's sprint qualifying session, Hinze stepped up her title bid with a blistering ride to finish 0.359 seconds clear of Zhong to reach the last eight.

Hinze was even faster when she won both races in the best-of-three quarter-final series against newly-crowned Olympic keirin champion Braspennincx.

Up next for Hinze is Canada's Kelsey Mitchell, the world record holder in 200m time trial. Mitchell made light work of compatriot Lauriane Genest in a one-sided last-eight encounter.

Germany will have only one representative in Sunday's medal shootout after Friedrich was eliminated by Ukraine's Olena Starikova, who won the decisive leg of the ride off by 0.019 seconds.

Rio 2016 bronze medallist Marchant, who was involved in a high-speed crash during Thursday's keirin event, was outclassed by Hong Kong's Lee Wai-sze in the quarter-finals.

Marchant will now compete with Braspennincx, Friedrich and Genest in a fifth-place playoff on Sunday.

Earlier, Zhong failed to qualify for the last eight through the repechage round, which marked the end of the road for the Chinese rider on the international stage.

Zhong's team sprint triumph on Monday made her China's only cyclist with two Olympic golds.

"This was my last international race. One month from now I will still race in the China Games, and then I'll retire," Zhong told reporters.

"After having won two gold medals, I feel like (my career) is complete. I don't have any regrets."

(Reporting by Hardik Vyas in Bengaluru; editing by Clare Fallon and Ken Ferris)