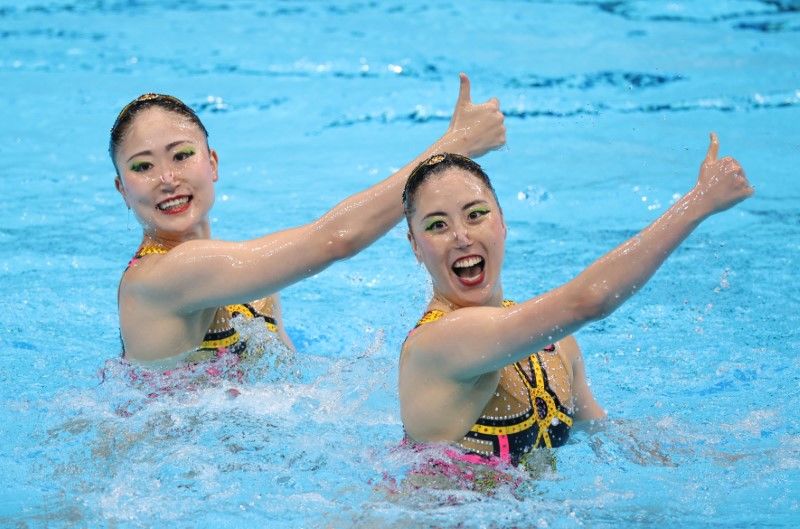 TOKYO (Reuters) -Japan, once an almost constant presence on the Olympic podium in synchronised swimming, are this year struggling to hang on to the team bronze they won in Rio 2016 after already failing to retain duet bronze.

The rising stars are Ukraine, who edged Japan for that medal on Wednesday and finished in third place to Japan's fourth in the team technical event on Friday -- a placing that hurts more in an Olympics hosted at home. The Russian team were first and China second.

Though Japan have never won gold since synchronised swimming became an Olympic sport in 1984, they have taken either silver or bronze, in duet or team, every year except for London 2012.

That year they were completely shut out, a fate that may await them this year as well, unless they top Ukraine in the free event on Saturday.

"To be honest, we were unable to gain the points we thought we had gotten," Yukiko Inui, 30 and a three-time Olympian, told reporters after the team event on Friday.

Today, part of the problem is simply lack of experience.

Japan's Olympic team have only one Games veteran, Inui, compared to six for the Russian team -- including Svetlana Romashina, who this week became the most decorated Olympian in synchronised swimming -- and five for China, who took duet silver.

Japanese head coach Masayo Imura said on Friday the lack of recent global competitions due to the pandemic might also play a part, with European teams -- which took part in the European championships earlier this year -- having had a chance to give the judges fresher impressions.

The last world championships, where Japan finished fourth, was in 2019, and Imura also wondered if the aesthetics of the sport might have changed since then in a way that disadvantages Japan.

"I keep telling the team that time for us stopped in 2019, and we have to start from there, from that fourth place," Imura said, adding that she felt the team had progressed strongly since then.

"If we keep performing well, the direction of the wind will change. We have to keep doing our best."