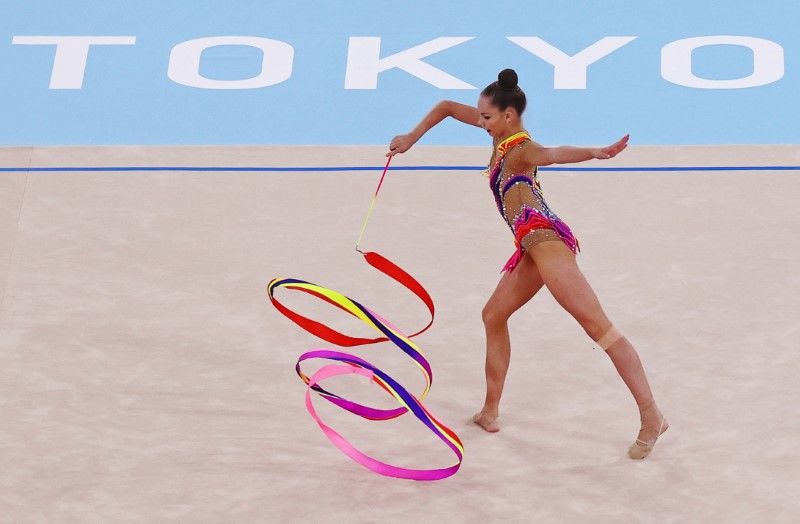 TOKYO (Reuters) - Rhythmic gymnasts may look delicate as they slip gracefully through hoops and catch clubs while doing the splits in the air but under their glittery leotards and perfectly coiffed buns their bodies tell a story of brutal perseverance.

While competing in the finals on Saturday, Anastasiia Salos at one point pirouetted on one foot while the other was pointed to the ceiling and tapped her clubs against the matt as if they were drumsticks - all the while beaming at the judges.

As well as the smiles there have been plenty of tears on her journey to become an Olympian.

The 19-year-old told Reuters she has had surgery on her back, her knee and her ankle.

"I rested for about a year. Some movements are still a bit difficult," said the Belarusian, who started when she was four, adding that some poses had been especially tough on her body as a child.

Laura Zeng of the United States said the sport had hidden dangers.

"You have overuse injuries, I've got stitches here and there, I got a bloody nose from when the club hit me in the head - everyone was wondering if I had a concussion," Zeng said.

"People have ribbon sticks pin them in the eye...it can actually be quite dangerous."

Mexico's Rut Castillo Galindo said she got hurt so badly she thought she would have to give up the sport.

"I got an injury on my back when I was 18 and thought I wouldn't be able to continue," she said, adding that her feet and knees are also often in pain. "I was doing a pose where I had to balance and put my leg around my back."

Gymnasts are judged on factors including “body difficulties” such as balances, turns, and jumps, as well as execution, and artistry.

To stand out in Friday's individual all-around qualifiers, Russian gymnast Arina Averina bounced a ball with her left foot, leg over her head, while doing a handstand before smoothly bending into a new pose to the music.

Her twin Dina, who once had her brow cracked by a falling club, kicked a ball in the air while doing the splits, catching it in her hands before melting into her next pose.

Alina Harnasko of Belarus said that while the gymnasts made it look easy nothing could be further from the truth.

"It looks so easy when you watch it, but it completely isn't," she said. "We train 10 hours a day without any breaks ... it's important to keep performing."