Olympics-Cycling-Joy for Danes in madison, Japan dreams of keirin gold 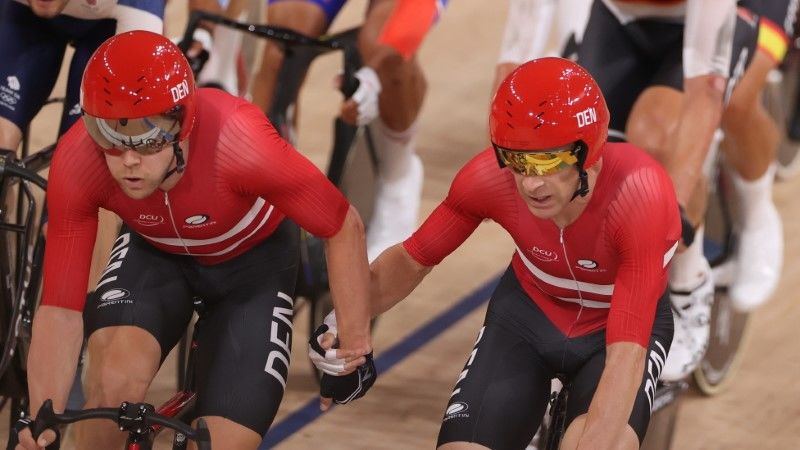 IZU, Japan (Reuters) - Denmark's Lasse Norman Hansen and Michael Morkov combined brilliantly to triumph in a fierce scrap for Olympic gold in the newly-restored men's madison at the Izu Velodrome on Saturday.

It was the only title on offer on the penultimate day of action but the loudest cheers were reserved for Japanese riders Yudai Nitta and Yuta Wakimoto.

They both reached the quarter-finals of the keirin and will go for gold on Sunday in an event with deep roots in Japan.

In contrast to Britain's romp to victory in the first-ever women's Olympic madison on Friday, the 200-lap men's race was an absorbing 50-minute battle waged at almost 60kph.

The world champion Danes ultimately proved the most durable but it was a close-run thing for Hansen who shook off the despair of losing the team pursuit final to Italy this week.

Accumulating sprint points steadily, the Danes opened up a decisive lead over France in the second half of the race and claimed victory with 43 points.

Hansen is the first Danish rider to win multiple gold medals in Olympic track cycling, having won the omnium in 2012.

"It hurts all over the place but it's such a nice feeling," a drained-looking Hansen said. "It was a great achievement to win gold in London but I was very young, I didn't understand it fully at the time. Now I appreciate it more."

Britain's Ethan Hayter and Matthew Walls snatched silver with a storming finish to give them 40 points, having looked like slipping off the podium.

Frenchmen Benjamin Thomas and Donavan Grondin had launched an audacious attack off the front in the second half of the race. But they could not gain the lap they were hunting and had to settle for bronze, despite also having 40 points, by virtue of Britain winning the last sprint.

The madison, a frenetic event in which teams of two take it in turns to race before 'slinging' their partners into the fray, made its return to the men's track programme after being omitted from the 2012 and 2016 Games.

Morkov, like his partner a professional road cyclist, specialises in the madison. Last year he won a second world title with Hansen in Berlin having trained alone in his hotel room after a COVID-19 scare at the start of the pandemic.

"I've been waiting a very long time for this," the 36-year-old said. "When this event was taken off the Olympic programme it was a big bummer.

"But in 2017 when I heard it was back on the programme, I was in no doubt that this would be my shot at an Olympic medal."

Keirin, where riders are paced by a motorised bike for three laps before fighting it out for three more at speeds of 70kph, holds a special place in Japanese culture as a gambling sport.

Japan, though, has won only one bronze medal since it became an Olympic discipline in 2000. In Nitta and Wakimoto, who have put the big money of professional keirin on hold to seek gold, they have a couple of real contenders.

Frenchman Benoit Vetu, hired as Japan's coach five years ago to deliver a keirin medal in Tokyo, said the real fight would begin in Sunday's quarter-finals.

"We've been working for five years, every day we come to this velodrome for this moment," Vetu told a large group of reporters, mostly Japanese.

Nitta and Wakimoto must beat some of the best sprinters in the world on Sunday to reach the podium, including reigning champion Jason Kenny who remains in the hunt for the seventh gold medal he needs to become Britain's most decorated Olympian.

World champion Emma Hinze reached the semi-finals of the women's sprint where she will face Canadian Kelsey Mitchell on Sunday, with the other semi-final between Hong Kong's Lee Wai-sze and Ukraine's Olena Starikova.