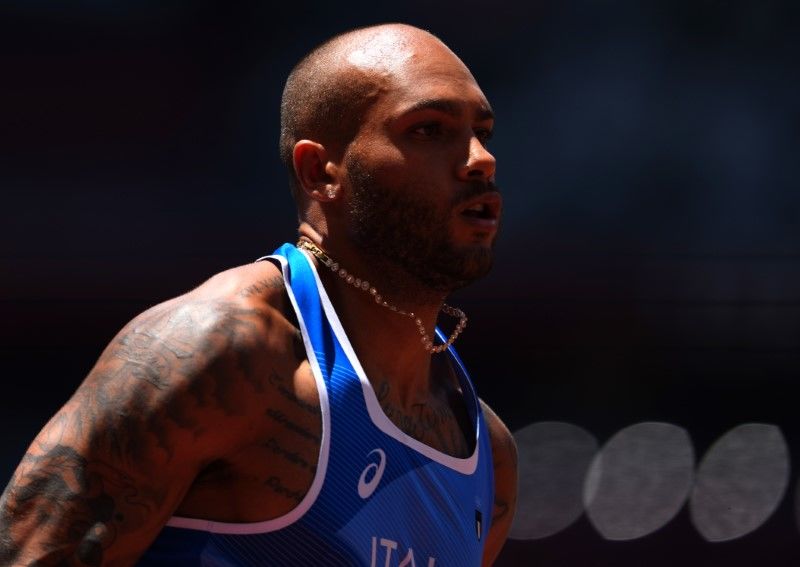 TOKYO (Reuters) -Italy's double Olympic champion Lamont Marcell Jacobs said on Saturday he had split from his former nutritionist once he heard that Giacomo Spazzini was allegedly being investigated for a connection with performance-enhancing substances.

Jacobs has been one of the Tokyo Games revelations, becoming the first Italian ever to win the 100 metres sprint at an Olympics Games, racing to victory with a European record time of 9.80 seconds in the showcase final in Tokyo despite having not gone under 10 seconds until this year.

He was also part of the winning 4x100 metres relay team for a stunning sprint double, with Italy already earning more medals in Tokyo than in any other summer Olympics and with a day of competition still left.

"Well, this is something that honestly, I am not involved with, because from the very first moment we heard about this thing that happened, we stopped working with him," Jacobs told reporters when asked about Spazzini.

"But we are not worried, in fact the person was involved in a situation which was not his fault. At the end of the situation he was not considered guilty, so we are relaxed about it."

Italian media have reported that the pair split in March when the first reports surfaced of Spazzini's alleged involvement.

A spokesman for the Milan police said an investigation involving Spazzini was launched in 2019 and subsequently concluded, and the prosecutors now needed to decide whether and how to proceed with the case. The spokesman said he could not comment on the nature of the allegations.

Earlier this week the Italian Olympic Committee (CONI) blasted suggestions in the media that cast doubt on Jacobs's victory in the 100 metres, saying the reports were "embarrassing and unpleasant".

Jacobs, who said his and Italy's success on the track was down to hard work, was one of several high-profile athletes to wear new running spikes featuring "performance-enhancing" carbon soles en route to his gold medals.

Athletes in Tokyo have also praised a fast track that has produced a host of world, continental and national records from sprint to middle distances.

"Well, what can I say? We have been working so hard for so long," Jacobs said.

"We are working on this relay since many years back and the big idea of the coach was that in the future we can make a successful quartet and now we are in that moment -- and we were finally able to do it.

"We were able to create a compact team, who were able to come with me on this beautiful journey, and here we are with these two gold medals," he said.

They won 28 medals at the London 2012 Olympics and the same number at the Rio de Janeiro Olympics five years ago.