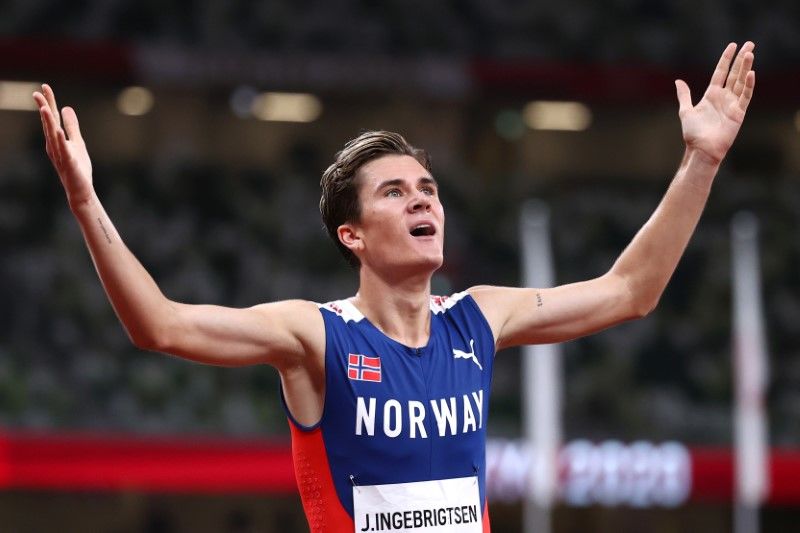 Josh Kerr of Britain ran a personal best to claim the bronze medal.

Ingebrigtsen was the first European winner of the event since Spain's Fermin Cacho in Barcelona in 1992.

The Norwegian started fast and took the lead before Cheruiyot overtook him and dictated the pace for the majority of the race as Ingebrigtsen tucked in behind.

The 20-year Norwegian sped past Cheruiyot on the last lap, however, to clock a blistering 3:28.32 and claim the gold medal.

The previous mark of 3:31.65 was set by Kenya's Abel Kipsang in Tokyo during the semi-finals on Thursday. Kipsang finished fourth in the final.

"I've been able to do it (win gold) first try and I feel like I am just getting started. But at the same time, I have been dreaming of this for my whole life. It's great," Ingebrigtsen told reporters.

Crowds in Sandnes, Ingebrigtsen's hometown on Norway's west coast, gathered outside the stadium where he has run thousands of laps since he was a boy, cheering and screaming with joy.

His brother Henrik, a fellow athlete, told local TV that Ingebrigtsen had run a perfect race.

"The way he did it was stunning. He took control from the start," he said.

Cheruiyot, the 2019 world champion and this year's world leader, could not respond to Ingebrigtsen's late move, settling for silver and his first Olympic medal in what has been a challenging road to Tokyo for the Kenyan.

The 25-year-old missed the cut to compete in the Games after finishing fourth in the Kenyan trials and only made the team https://www.reuters.com/article/olympics-2020-ath-cheruiyot-idCNL8N2OX2SB after one of the qualified runners was dropped for not meeting World Athletics anti-doping testing requirements.

Cheruiyot said he was pleased about the result, although he struggled near the end.

"My performance was good, well-controlled. We ran good times in an Olympics. And I'm happy about the results of the day," he said. "In the last 100 metres, I was feeling tired. I was feeling my right hamstring so I didn't manage to run to the finish line fast."

He congratulated the victor Ingebrigtsen.

"This is the first time Jakob beat me – in a big event, at the Olympics. I know he was well-prepared and I'm happy for him," he said.

He is now second only to Mo Farah, who won gold in the 5,000m and 10,000m at the 2012 and 2016 Games, in the British all-time rankings, posting a quicker time than the illustrious trio of Sebastian Coe, Steve Ovett and Steve Cram.

"I'm blown away. This has been a hard championship for me with the first round not going great," the 23-year-old Kerr said. "I had to go home, recalibrate and come out fighting for every step."