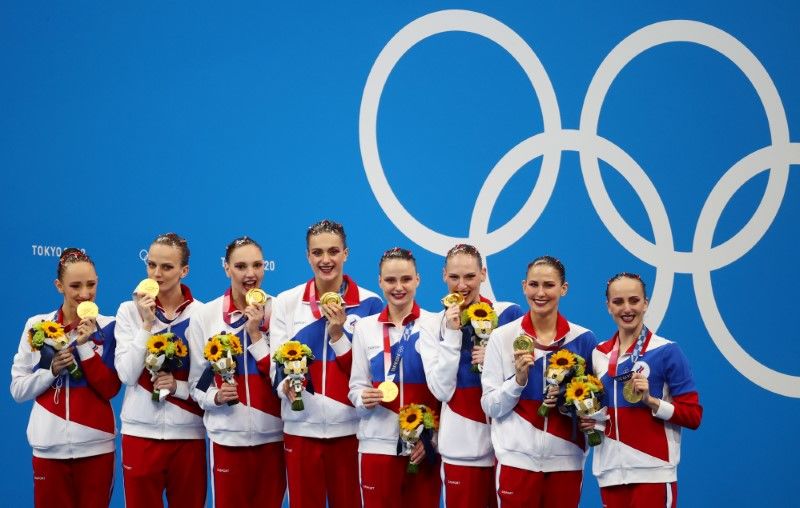 By Elaine Lies and Mayu Sakoda

TOKYO (Reuters) -With a high-powered, tightly-swum routine, Svetlana Romashina claimed a seventh Olympic gold medal with her Russian team as they won the synchronised swimming final on Saturday to continue a golden run stretching back to the 2000 Sydney Games.

Romashina, 31 and the veteran of four Olympics, this week became the most decorated Olympian in synchronised swimming when she won the duet competition with an edgy, spider-themed routine. She has hinted at retiring after Tokyo.

The athletes from the Russian Olympic Committee (ROC) topped the podium for the sixth time in succession with a combined 196.0979 out of a possible 200, outclassing the rest of the field with a powerful routine that included high lifts and swimmers rising from the water standing on a team mate's foot.

"I can say that the sixth and the seventh medal were the most difficult in my life," an emotional Romashina told a news conference. "I became a mother and it was very difficult to be mother and an athlete at one moment."

Romashina said she was not sure if she would retire for good or not but that she wanted a rest.

"I understand that it will be my last Olympic Games as an athlete," she added.

China retained their silver from Rio 2016 with 193.5310 points, starting their routine to music based on traditional Chinese instruments with a graceful, wavelike movement at the deck before diving in for a powerful sequence that included tight swimming and perfectly coordinated feet.

"The one-year delay in the Olympics made us prepare more, thanks to support from our coaches," said four-time Olympian Huang Xuechen. "We made improvements because we analysed Russia's video and data."

Rising stars Ukraine scooped bronze with 190.3018, having secured the country's first ever Olympic medal in synchronised swimming -- another bronze, in the duet -- earlier this week.

The team began their electrifying routine to powerful music that then turned soulful, and they performed several acrobatic leaps in the air and used most of the pool.

"It's our main goal for five years and we're so excited," said Maryna Aleksiiva. "It's the highest score we've ever had.

"I think, with our coach, we created something new."

A frustrated Japan, who had hoped to retain their bronze from Rio, and had repeatedly expressed disappointment with their scores during the past week of competition, finished fourth despite a rousing routine to the music of traditional festival drums and flutes.

It is only the second time since synchronised swimming became an Olympic event in 1984 that Japan have not won a medal, although they have never got gold. The previous time they were shut out of the podium was at London 2012.

Head coach Masayo Imura, a venerable fixture in both the Japanese and Chinese synchronised swimming world after coaching China for nearly a decade -- said she would retire as national coach but still wanted to retain a link to the sport.