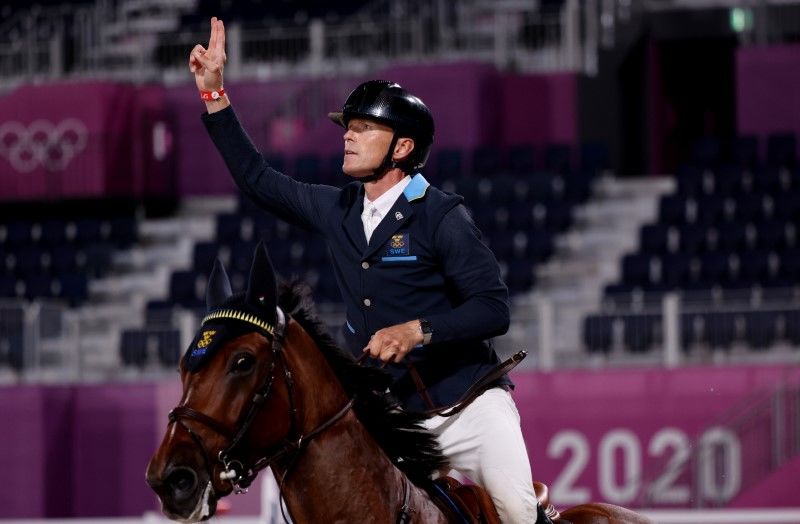 Springsteen, alongside 2008 team gold medallists Laura Kraut and McLain Ward, jumped a clear round in the fight for the top spot, as did every rider in the jump-off. Sweden won the title on time to end their gold drought that has lasted since 1924.

“We deserve to have a good result today,” Von Eckermann said. Asked about narrowly missing out on a medal in the individual finals on Tuesday, he said: “I pulled myself together and I’m happy I did.”

Sweden, who powered through the qualifier as the only team with no penalties, saw Baryard-Johnsson knock down a fence in the final but that made barely a dent in the team’s stellar performance overall.

Team Sweden in the stands were already celebrating when twice individual silver medallist Fredricson’s horse caught the last pole with its hooves and felled it.

Fears of losing the gold medal lasted only seconds as France, who could have taken the title, saw the horse of their final rider, Penelope Leprevost, refuse to jump a barrier, resulting in the combination’s elimination.

Two of the top medal contenders also did not finish the final.

After two disappointing rounds, Britain withdrew their third rider Ben Maher, who won individual gold on Tuesday, to preserve his horse Explosion for competitions after the Olympics.

Germany’s team did not finish after world number one Martin Deusser’s horse shied at a barrier and he withdrew from the competition.