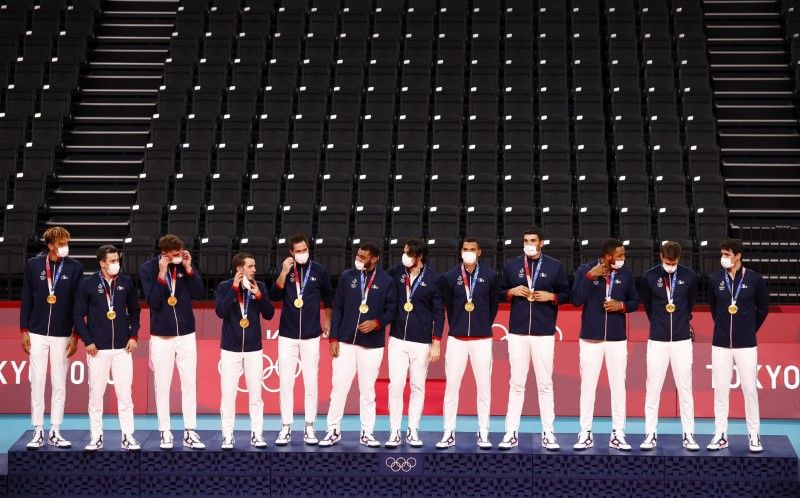 TOKYO (Reuters) -France beat the Russian Olympic Committee (ROC) team in the men's volleyball final on Saturday in a sensational five-set match to grab their first Olympic gold medal in the sport.

The ROC took the silver and Argentina upset 2016 gold medallists Brazil to claim the bronze.

"It's a magic that our dreams came true," said Laurent Tillie, who will be stepping down as France's head coach following the Games.

"We've had good times and bad times, but we've pushed on to achieve our goal," he said.

Before Saturday, France's best Olympic result in men's volleyball was their eighth-place finish in 1988.

The French took the first two sets with consistent defence and a barrage of clever serves and attacks but the ROC recovered momentum to win the following two, leading to a dramatic ending after a tight rally in the final set.

Although most of the 15,000 seats remained empty due to ticket-paying spectators being barred due to the COVID-19 pandemic, accredited personnel from both countries came to cheer on their teams during the nerve-shredding battle.

When asked how France managed to recover after they let a two-set advantage slip away, France captain Benjamin Toniutti revealed: "We said maybe in 10 minutes this will be over and we could be the winner, so we give all our energy to the fight.

"We gave everything and we got this gold medal. We made a history and this will never go away."

The volleyball triumph capped a golden day for the French after their men's handball team also claimed the top prize with victory over Denmark.

Earlier in Ariake Arena, Argentina stunned top-ranked Brazil in a tense five-set bronze match, sending them home without an Olympic men's volleyball medal for the first time since 2000.

"We failed, we oscillated a lot in this championship," Brazil's Wallace de Souza said. "I'm frustrated to leave without a medal but I need to give credit to Argentina, who played very well."