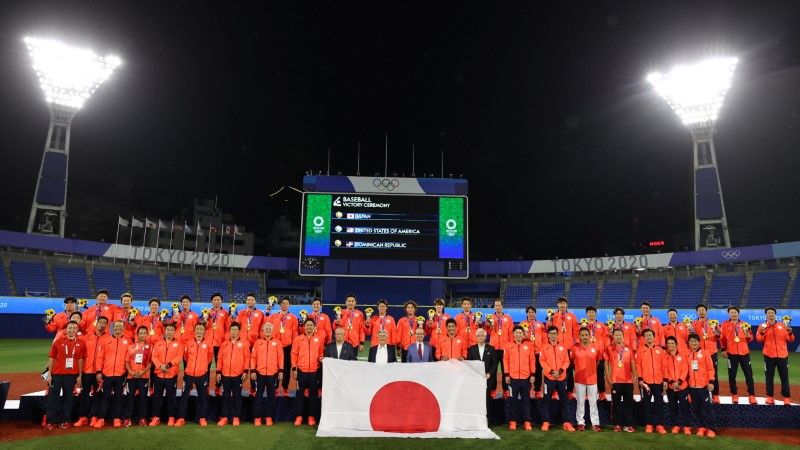 By Junko Fujita and Paresh Dave

YOKOHAMA, Japan (Reuters) -Young pitchers from Nippon Professional Baseball in the biggest game of their careers led Japan to a first Olympic gold medal in the sport with a 2-0 win over the United States on Saturday.

The dominant performance followed coach Atsunori Inaba trusting the up-and-comers with all on the line despite having better known names available on the roster.

"They pitched a hell of a game," said U.S. third baseman Todd Frazier. "They got first pitch strikes. It just wasn't our day at the plate. There's no other way around it. No excuses."

Japan came into the Games with a younger pitching corps than when they finished fourth at Beijing 2008, which was the last time baseball had been contested at the Olympics.

Masato Morishita, 23, last year's rookie of the year in NPB, started the game and pitched five scoreless innings for Japan. The winning pitcher, he allowed just three hits and struck out five.

Mid-career pitchers Koudai Senga, 28, and Suguru Iwazaki, 30, had one hitless inning each and Hiromi Itoh, 23, another rookie, surrendered two hits but no runs in an inning himself.

Itoh took comfort on the mound knowing there were veterans behind him just in case.

Ryogi Kuribayashi, 25, also in his first year, saved the game with a one-hit ninth inning. In total, Japan's pitchers produced eight strikeouts and threw 150 pitches to shut down the U.S. lineup.

Kuribayashi, a closer for the Hiroshima Toyo Carp, set a rookie record for pitching 14 scoreless games in May and he eventually extended that record to 22.

"I wondered if I deserved to close the game because there are other good pitchers," said Kuribayashi. "But I was chosen so all I could do was to save the game."

Fielders behind them had no doubts."I knew they were great," right fielder Seiya Suzuki said of NPB team mates Morishita and Kuribayashi. "They were so cool on the mound."

"Every pitcher had a strong determination not to allow runs and the fielders offered very solid defense," Japan coach Atsunori Inaba said. "We played with tenacity and we won."

The U.S. finished the six-team, 16-game tournament second to South Korea in runs scored and tied with Japan for fewest runs allowed.

The U.S. played six games in all and Japan five. Japan finished with more strikeouts and fewer walks and hits allowed.