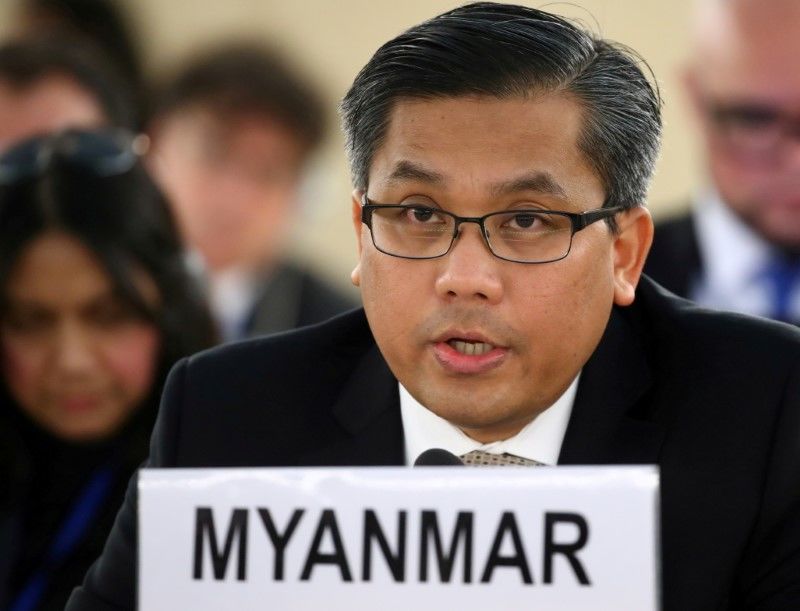 NEW YORK (Reuters) - The United States on Saturday condemned a thwarted plot to attack Myanmar's U.N. ambassador in New York, saying it fits a "disturbing pattern" of authoritarian leaders and their supporters seeking to persecute opponents around the world.

Two Myanmar citizens have been arrested in New York state for plotting with an arms dealer in Thailand - who sells weapons to the Burmese military - to kill or injure Myanmar's U.N. ambassador, U.S. authorities said on Friday.

Ambassador Kyaw Moe Tun, who represents Myanmar's elected civilian government which was overthrown by the military in February, told Reuters on Wednesday that a threat had been made against him and U.S. authorities had stepped up his security.

The U.S. Ambassador to the United Nations, Linda Thomas-Greenfield, said on Saturday that the threat "fits a disturbing pattern of authoritarian leaders and their supporters reaching across the globe ... to persecute and repress journalists, activists, and others who dare speak or stand against them."

Thomas-Greenfield cited Krystsina Tsimanouskaya, a Belarusian athlete who refused to return home from the Tokyo Olympics and sought refuge in Poland, and a thwarted plot by several Iranians to kidnap a New York journalist and rights activist who was critical of Iran.

"These are only the most recent acts of transnational repression, and they must be met with the condemnation of the world and with full and certain accountability," Thomas-Greenfield said in a statement.