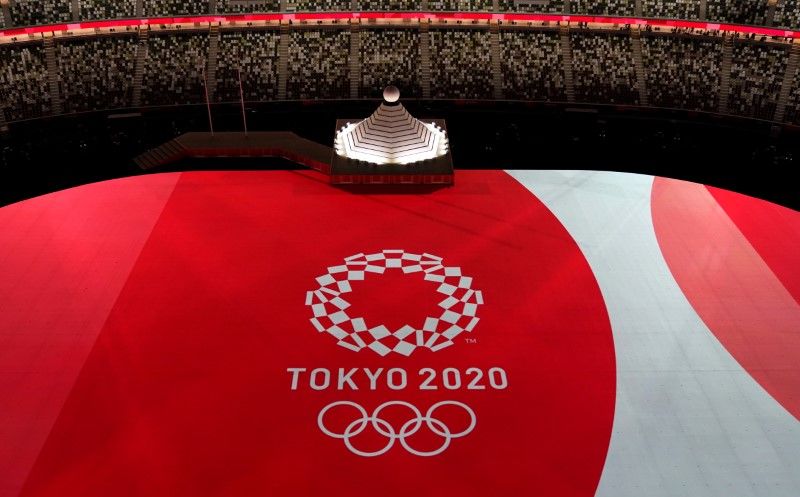 WARSAW (Reuters) - Forging through the blazing Japanese sun and the dark cloud of suspicion that has hung over its Olympians in the wake of doping scandals, the Russian Olympic Committee declared the Tokyo Olympics a success.

Its delegation of more than 330 athletes wore their country’s colours despite being stripped of their flag and anthem because of sanctions imposed in 2015.

Russian gold medallists were serenaded with music from composer Pyotr Tchaikovsky and wrapped themselves in a white flag with ROC’s emblem - three flames in the colours of the Russian flag with the Olympic rings below.

The cosmetic changes did little to conceal the presence of a powerful Russian team that won 69 medals, including 20 gold, ahead of the final day of competition.

“These Games were successful for our team,” Russian Olympic Committee President Stanislav Pozdnyakov said. “Our forecasts were fully confirmed and in some disciplines we did not expect such results.”

The success included Russian male gymnasts winning gold in the team event https://www.reuters.com/lifestyle/sports/gymnastics-russia-survive-asian-fight-back-take-team-gold-2021-07-26 for the first time since 1996, Evgeny Rylov’s two golds in the 100m and 200m backstroke and high jumper Maria Lasitskene’s Olympic title at her first Games.

Russian wins in Tokyo, however, irked some competitors. U.S. swimmer Ryan Murphy said the 200m backstroke final https://www.reuters.com/lifestyle/sports/swimming-american-murphy-says-200m-backstroke-race-probably-not-clean-2021-07-30 was “probably not clean” after he lost to Rylov before he walked back his comments when asked if he was accusing any of his rivals of cheating.

“Yes, we are here at the Olympics,” the Russian Olympic Committee wrote on Twitter in response to Murphy’s comments.

“Absolutely rightly. Whether someone likes it or not. You have to be able to lose. But this is not given to everyone.”

Despite an impressive medal count, the Russian team’s sporting triumphs continue to be overshadowed by doping woes.

Russians will not compete under their flag at the Beijing Winter Olympics next year as their athletics federation continues to trudge towards reinstatement.

Only 10 Russian track and field athletes - including Lasitskene and Olympic silver medallist pole vaulter Anzhelika Sidorova - were authorized to compete in Tokyo as punishment for doping offences by senior staff at the federation.

Lasitskene, a three-time world champion and virulent critic of some federation officials, sat out the 2016 Rio Games along with all but one Russian track and field athlete.

Slowed by reinstatement procedures and officials’ involvement in scandals, her quest for an Olympic title has been a long journey.

“I’m dreaming. I can’t believe this happened,” said the 28-year-old, who dropped to her knees and wept after clinching gold. “This medal was very difficult to win.”