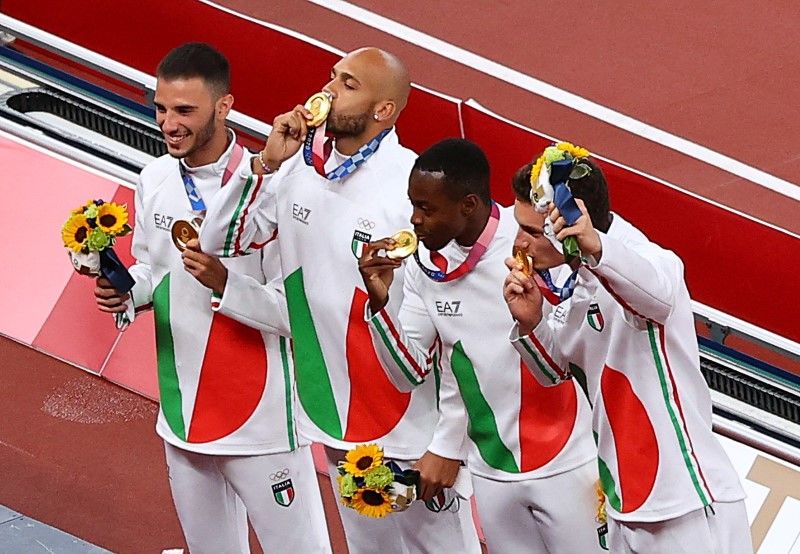 TOKYO (Reuters) - Italy's COVID-19 gamble that allowed a small group of elite athletes to train through the pandemic when much of the world was in lockdown has paid off handsomely at the Tokyo 2020 Olympics, with the country setting a new medals record.

Going into the final day of competitions Italian athletes have won 39 medals, more than traditional European sports powerhouses Germany and France, and even more than the 36 Italy had won at their home Olympics in Rome in 1960, their previous best mark.

They matched their 28 medals from the 2016 Rio de Janeiro and 2012 London Games after only 10 days, adding to the country's glorious sporting summer following their European soccer championship win in July.

"These were the greatest Olympics ever for Italy," Italian Olympic Committee President Giovanni Malago, whose country will host the 2032 winter Olympics, said.

"I am proud of the whole delegation...and of this wonderful team that has given Italy great joy, after the Euros, providing very strong emotions to all Italians who have suffered so much in the last two years because of COVID-19."

But it is exactly that which may have given Italy the edge in Tokyo.

While other nations were shutting gyms, pools and tracks as the pandemic claimed millions of lives globally, Italy provided an exemption for some 250 elite athletes to keep training for much of the past 18 months.

Among those who hardly had a day off was Gianmarco Tamberi, Italy's high jump gold medallist, who shared the top of the podium with Qatar's Mutaz Essa Barshim.

Tamberi was locked out of training for just two weeks in the last year and a half, and he lit up Tokyo's Olympic stadium last week on a night that saw Italy dazzle in athletics with sprinter Lamont Marcell Jacobs capturing the blue riband men's 100 metres title.

Jacobs went one better a few days later, snatching the 4x100 metres relay gold for a superb double in the post-Usain Bolt era of athletics.

From cycling and sailing to fencing and karate, Italy's gold medals came pouring in while overall the nation medalled in 16 of the 33 sports. There was no single day at the Games without at least one Italian medal in an unprecedented run for the country.

Signs of Italy's strength were evident even before the Games when a record 384 athletes earned a qualifying spot for Tokyo. Their previous best was 367 from the Athens Games in 2004.

For the medallists, apart from national glory, there is also the prize money that now awaits them, with gold fetching 180,000 euros, almost three times that of French Olympic champions and eight times more than what the German gold medallists get.