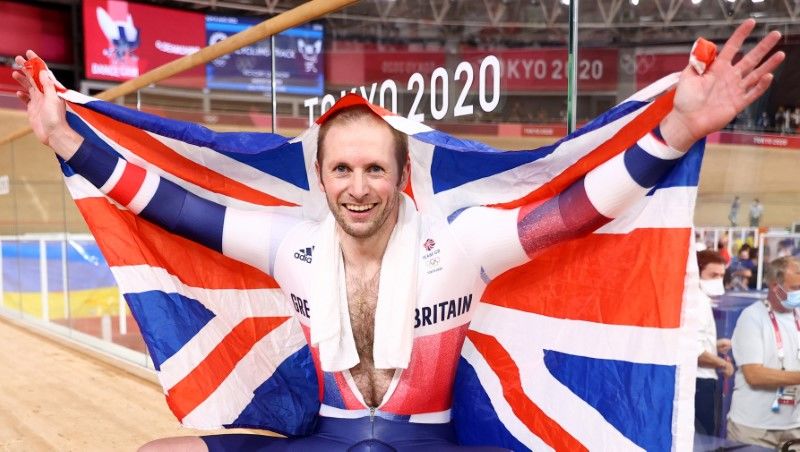 IZU, Japan (Reuters) - Jason Kenny became Britain's greatest Olympian as he powered to victory in the men's keirin on Sunday to claim the seventh gold medal of his incredible career.

He failed to add to his gold haul in the team sprint and individual sprint, looking a little off his best form.

But he saved the best to last with a virtuoso performance to win the keirin by a country mile, retaining the title he won in Rio in 2016, after Hoy had won it in 2008 and 2012.

After the electric pace bike pulled off the track with three of the six laps remaining, Kenny put the hammer down and surprised his rivals with an audacious attack.

The plan worked a treat, building a huge lead that none of his rivals could reel in.

Malaysia's Azizulhasni Awang finished a distant second, while world champion Harrie Lavreysen of the Netherlands took the bronze to add to his golds in the team and individual sprint in the Izu Velodrome this week.

Kenny was lifted high into the air by Lavreysen and Awang on the podium while Hoy, commentating for the BBC, was the first to congratulate the king of the sprints.

"I have never seen a race like it, to watch the guy at the front ride off into the distance, it was just incredible," Hoy said. "He gained a bit of height, kept the pressure on the pedal and he just went for it. It was never in doubt.

Kenny's nine Olympic medals is the most by a British athlete in any sport. He had been tied on eight with fellow cyclist Bradley Wiggins.

While there was joy for Kenny, Japan's hopes of an historic gold in a race that has deep roots in the host nation ended in disappointment as neither Yuta Wakimoto or Yudai Nitta made the final.