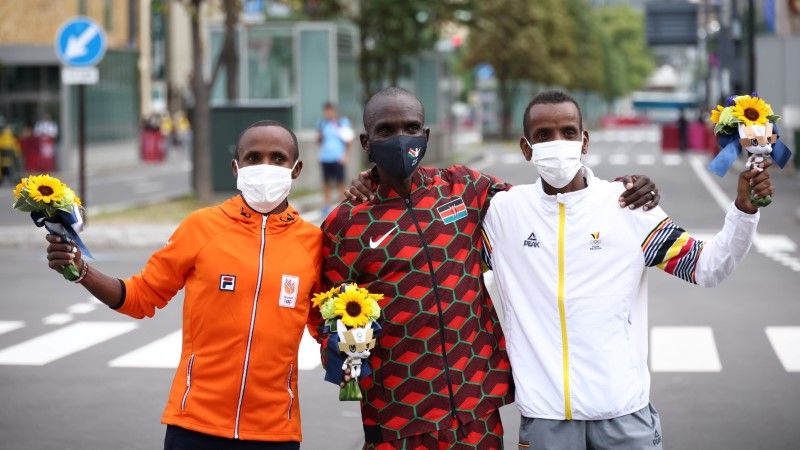 SAPPORO, Japan (Reuters) - Locked in a three-way race for silver and bronze in the Olympic men's marathon on Sunday, Abdi Nageeye put friendship first to urge his struggling training partner Bashir Abdi ahead of their Kenyan rival in a final sprint for the line.

Nageeye is from the Netherlands and Abdi from Belgium, but both were born in Somalia which they left at a young age.

With less than a kilometre of the 42km race to go, they were battling Lawrence Cherono for the final two medal spots after Cherono's Kenyan team mate Eliud Kipchoge had secured gold.

Nageeye, who was slightly ahead, slowed down and waved on his friend, the encouragement appearing to do the trick as Abdi overcame both cramp and Cherono to take bronze.

"In the last 800 metres I wanted to go, but I thought about Bashir and I was like, let him come close," Nageeye said.

"So I was trying to help him and he had a cramp. And then I still waited for him and when he came next to me I thought, OK, now I want to make sure.

"And then I sprinted away and was just still looking around - actually it was dangerous to look so many times," he said with a laugh.

Abdi said he had a cramp in his right hamstring during the last 3km and might not have been able to do it without his friend.

"He said 'you must go.' If he was not there today, it would have been a difficult last 3km. In training one of us is always a little better than the other in different training sessions. We encourage each other. It's what team mates do," Abdi said.