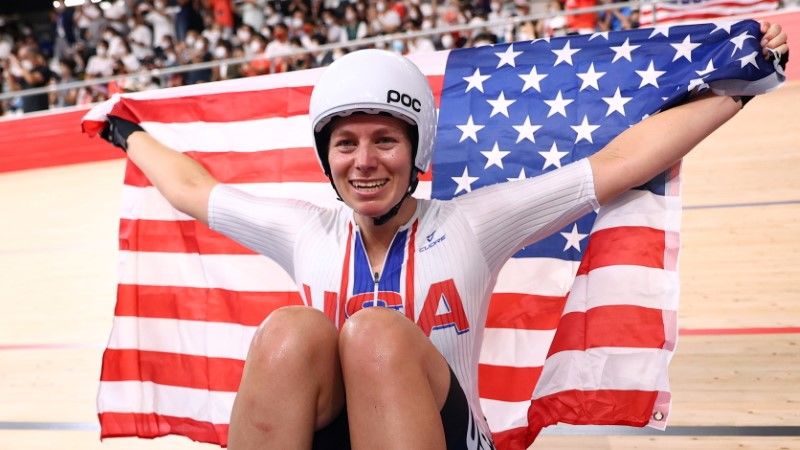 IZU, Japan (Reuters) - American Jennifer Valente recovered from a late crash to land an historic gold in the women's omnium as a gripping week of track cycling concluded at the Izu Velodrome on Sunday.

The 26-year-old showed true grit to climb back off the boards and become the first American woman to win an Olympic track title and the first from her country to do so since 2000.

After a consistent display, the time trial specialist was comfortably ahead on the scoreboard towards the end of the points race, the final element of the four-part endurance event crammed into three hours, when she went down hard.

But after dusting herself she rejoined the race and stayed out of trouble to take the title with 124 points.

"There were some bumps," Valente, who earned a bronze in the team pursuit, told reporters. "Crashing in the points races is never ideal. I was just trying to get back on my bike, make sure I was okay and get back in the race as soon as possible.

"Olympic gold? It's hard to believe, it'll sink in eventually but it hasn't quite yet."

On a day of firsts, world champion Yumi Kajihara, who also crashed late on, took the silver medal with 110 points, the first Olympic track cycling medal for a Japanese woman.

"I'm super happy," Wild said. "Every medal is special, I can't say one is more than another, but this a big one for me."

Briton Laura Kenny's hopes of becoming the first female track cyclist to win three gold medals in a specific event after her victories in London and Rio, never fully recovered after being involved in a huge crash towards the climax of the opening 30-lap scratch race.

The perils of racing wheel to wheel around a banked track at 50km per hour (30 miles per hour) were illustrated in spectacular fashion when Italian rider Elisa Balsamo fell, causing mayhem behind as eight more riders crashed, bikes and bodies flying in all directions.

Kenny was unscathed, unlike Poland's Daria Pikulik who could not continue in the competition, but after being awarded only 16 points she was always then playing catch-up to Valente who took the maximum 40.

The five-time Olympic champion won the tempo race to get back in the mix but an early exit in the elimination race left her too far back.

Consolation for Kenny was her husband Jason winning https://www.reuters.com/lifestyle/sports/cycling-seventh-heaven-keirin-king-kenny-2021-08-08 the men's keirin, taking his Olympic haul to seven golds - the most by any British Olympian.