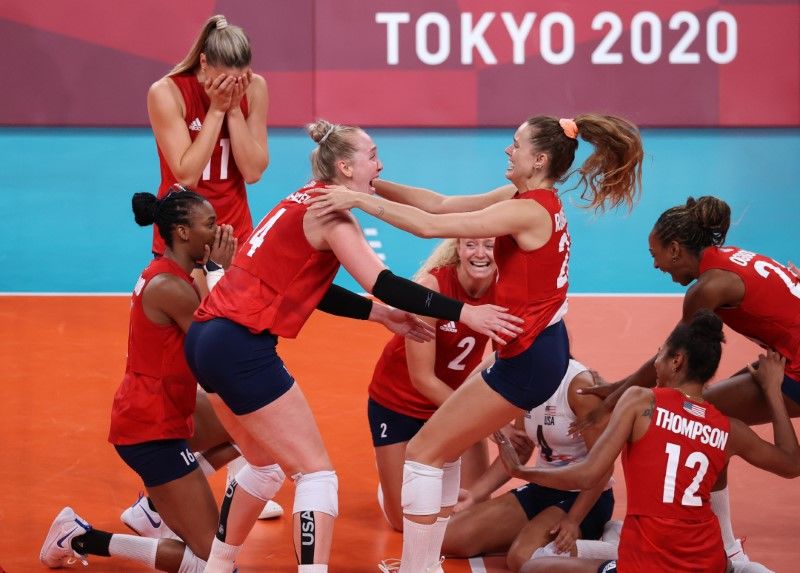 TOKYO (Reuters) -The United States' dream of winning a first Olympic gold medal in women's volleyball became a reality on Sunday, when they won against Brazil in straight sets in the final at the Tokyo Games, with the South American rivals taking the silver medal.

The Americans were dominating for most of the game, with a slew of tactical serves, consistent receptions and attacks.

"We had a good game plan for Brazil," U.S. head coach Karch Kiraly said. "We needed to serve really tough and Foluke Akinradewo started us very early, with 4 or 5 serves, so she got us up to a good start and we never stopped."

The U.S. women's team has in the past won three silver and two bronze medals in the event.

"Finally we got a gold and we became the Olympic champion," Kiraly said.

Their highlight came when U.S. players gathered in front of photographers for a group photo after they had hung their gold medals around each other's necks at the podium, a new way under COVID-19 restrictions.

That was when Queen song "We are the champions" played loudly in the venue and they, with coaches and staff, sang along, putting their hands around each other's shoulders and swayed from side to side.

For captain Jordan Larson and Akinradewo, playing in their third Olympics, a gold medal completed their "series" as they already have a silver and a bronze.

"Did I think that was going to happen? I don't know but to think I have one of every colour is pretty cool," the 34-year-old Larson said.

Earlier, Rio silver medallists and world champions Serbia overpowered South Korea in straight sets in the bronze match to take their second Olympic medal in volleyball at the Games.

For the first time in Olympic history, the volleyball competition concluded with the women's final, just a few hours ahead of the closing ceremony and a day after the men's final.

"I think there are a lot of things in the last year that have changed for woman in general. I think it's cool to be here till the very end and see through, and now we are going to the closing ceremony. That's really exciting."