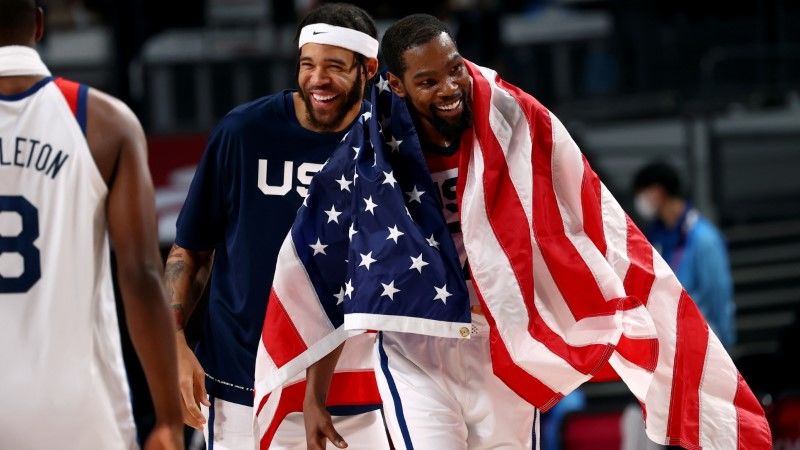 SAITAMA (Reuters) - Team USA continued its dominance in Olympic basketball in the Tokyo Games, extending record championship runs for men and women and earning an inaugural gold in the debut of 3x3 ball https://www.reuters.com/article/us-olympics-2020-bk3/olympics-basketball-3x3-u-s-women-latvia-men-grab-first-golds-in-games-debut-idUSKBN2EY1A5.

Margins of victory were narrow in these Games, said Andreas Zagklis, the head of organising body FIBA, leading to last-second heroics, such as a critical block by France's Nicolas Batum and a clutch jumper by Latvia's Karlis Lasmanis .

"And at the end of the day, these are the moments that create what we call the collective basketball memory," Zagklis said.

In a preliminary match at the Saitama Super Arena, the United States men suffered their first Olympic defeat https://www.reuters.com/article/us-olympics-2020-bkb-idCAKBN2EV038 since 2004 against France. But captain Kevin Durant righted the ship and led his team to a rematch victory in the final for their 16th gold. He also surpassed Carmelo Anthony as Team USA's all-time scorer.

The American women earned a seventh-straight championship. Captain Sue Bird won her fifth gold medal, leading a squad of WNBA stars in a sweep of all their competitors.

In the final, they defeated host nation Japan, who had fought their way to medal contention for the first time, highlighted by record breaking assists https://www.reuters.com/article/olympics-2020-bkb-idCNL8N2PD3X8 from Rui Machida. France won the women's bronze medal match against Serbia.

Slovenia's Luka Doncic was a standout on the men's side, leading all others in points and assists. His team made it to the bronze medal match in their Olympics debut, losing to Australia.

Slovenia may have gone farther but for France's Batum going "Batman mode" and executing a dramatic block https://www.reuters.com/article/olympics-2020-bkb-idCNL8N2PC4IC of Slovenia's Klemen Prepelic layup in the final second of the quarterfinal.

The U.S. also claimed the first ever gold in women's 3x3 basketball --a high-speed, half-court version played to hip-hop https://www.reuters.com/lifestyle/sports/basketball-3x3-at-first-medal-matches-dj-lass-is-there-pump-up-volume-2021-07-28 music-- staged at the Aomi Urban Sports Park in Tokyo. Kelsey Plum led scoring for the Americans, whose only defeat was to Japan.

A Serbian men's squad led by Dusan Bulut, the first real superstar https://www.reuters.com/lifestyle/sports/3x3-basketball-serbias-mr-bulletproof-adds-olympian-accolades-2021-07-24 of 3x3, had been favoured for gold, but had to settle from bronze. Instead it was Latvia that took the championship, when Karlis Lasmanis hit a dramatic two-point jumper to seal victory over the Russian Olympic Committee in the final.