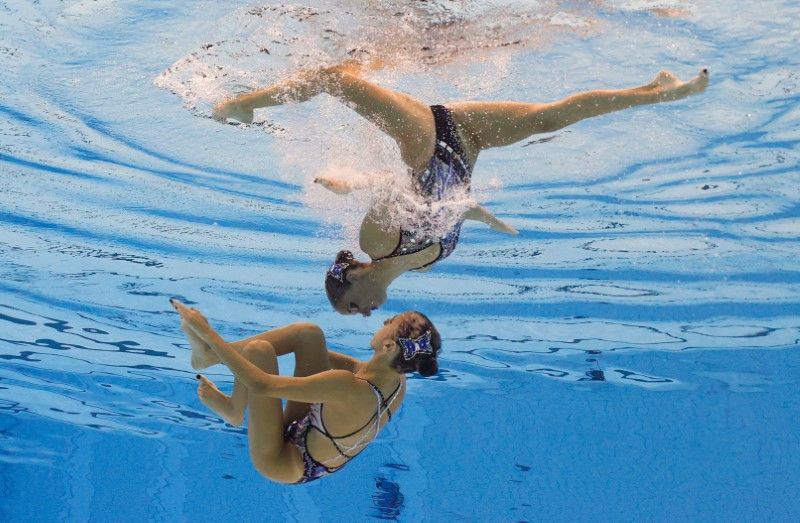 TOKYO (Reuters) - The alluring voice of an evil doll invites people to "come out and play". Witches, spiders and snakes cavort in edgy routines. Teams spin and twist to hip-hop and rap in the water.

It is the new face of synchronised swimming, aimed at changing the image of a sport long derided as flailing limbs, splashing water and fluffy water ballet done to florid classical music, and it dominated the Tokyo Games competition.

"Until 2019, we just swam classical music," said Eirini Alexandri, who with her identical twin sister performed the chilling evil doll duet routine for Austria, their suits bearing a threatening face.

"So we said OK, we have to change style."

The sport's official name was also changed to "artistic swimming" in 2017 by international swimming organisation FINA as part of a rebranding attempt.

The sport is a blend of muscle and grace. Swimmers have to hold their breath for extended periods underwater, swim in tight, intricate patterns in synchronisation with music, make eye contact with judges - and have it all look easy.

There are costs, with swimmers known to faint.

U.S. athlete Anita Alvarez briefly lost consciousness at the end of her routine at a qualifier in Barcelona this summer and had to be pulled from the water. She and her duet partner appeared at Tokyo but did not make it to the finals.

Though the results were predictable - Russian athletes continued a golden sweep unbroken since Sydney 2000, with China close behind - other changes were notable.

Music ranged from a scattering of classical to hip-hop, rap and a tune from a virtual singer, while routines went from light-hearted to edgy.

On Saturday, Spain's routine was "evolution," complete with dinosaur-like spines on the back of the team's suits, while other teams expressed international unity or the relationship between mankind and nature.

"We changed our tech team music to something really upbeat," Australian swimmer Emily Rogers said after scoring a team technical best with a routine to "Tokyo Drift," by the Japanese hip-hop group "Teriyaki Boyz."

"So maybe that was another reason why it's been our best score yet - because it's so much fun."