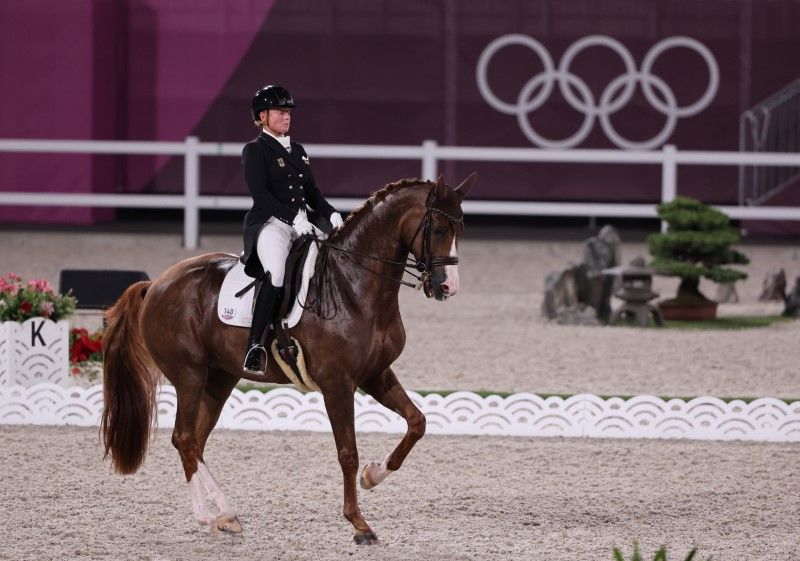 TOKYO (Reuters) - Germany, with dressage world number one Isabell Werth and rising eventing star Julia Krajewski, once again showed they lead the pack by claiming gold in three of the six competitions, while Britain and Sweden also delivered stellar rides in Tokyo.

Germany’s hopes of winning a gold medal in each of the three disciplines in Tokyo were dashed on Saturday, however, when Killer Queen, the mare of world show jumping number one Daniel Deusser, shied at a fence in the team jumping final.

Sweden narrowly beat the United States in the breathtaking jump-off that followed to claim their first team jumping gold medal since 1924, making up for the disappointment of the individual event where three Swedes were in the top five but were beaten to gold by Britain’s Ben Maher.

The daughter of Britain’s Queen Elizabeth, Anne, competed in the sport at the 1976 Montreal Olympics but it was the daughter of music royalty on show in Tokyo.

At an Olympics laden with inspirational stories, equestrian sports did not disappoint.

Germany’s dressage rider Dorothee Schneider won team gold just weeks after a traumatic accident in which the horse she was riding died and she broke a collar bone.

Tokyo’s oldest Olympian, veteran rider Mary Hanna, a 66-year-old grandmother, competed for Australia and said she was ready for the Paris Olympics in 2024.

South African rider Victoria Scott-Legendre almost did not make it to the Tokyo because of money worries, but a crowdfunding campaign saved the day.

Sadly, one horse did not survive the Tokyo Olympics.

Jet Set, the gelding Switzerland’s Robin Godel competed on, appeared lame at a fence in the middle of the cross-country course and was euthanised after being diagnosed with a ligament rupture.