IZU, Japan (Reuters) - Track sprint king Jason Kenny brought the curtain down on an enthralling week of racing in the Izu Velodrome with a sneak attack to win the keirin and claim a British record seventh Olympic gold on Sunday.

The 33-year-old Kenny, one of the most popular riders in the sport, admitted he had below his usual pace at the delayed Games, but saved his best until last to fire his country once again to the top of an Olympic track cycling medal table.

He had been powerless to stop the marauding Dutch https://www.reuters.com/lifestyle/sports/cycling-kennys-defence-sprint-title-ended-by-lavreysen-2021-08-05 take his team and individual sprint titles, but the powerhouse rolled the dice in the keirin final and it paid off handsomely.

Before his five rivals could muster a response Kenny was streaking half a lap clear, winning by a country mile.

"We said just before the start, if they're asleep maybe I should just launch one," Kenny, who edged in front of former teammate Chris Hoy on the list of most-decorated British Olympians, told reporters after being hoisted high on the podium by Malaysia's Azizulhasni Awang and world champion Harrie Lavreysen, who finished a distant second and third.

"When the time came I just saw a massive gap and it was just too big an opportunity not to try. So I just launched it and just kind of rolled the dice."

The day started worryingly for the Kenny family as his wife Laura's hopes of winning a third successive gold in the omnium event were dashed by a huge nine-bike pile-up https://www.reuters.com/lifestyle/sports/cycling-britains-kenny-involved-huge-crash-omnium-2021-08-08 in the opening scratch race.

American Jennifer Valente avoided the mayhem https://www.reuters.com/article/olympics-2020-ctr/update-1-olympics-cycling-american-valente-wins-gold-in-crash-hit-omnium-idUSL4N2PF01L to become her country's first female Olympic track cycling champion, although she also suffered a late scare when she crashed in the omnium's points race.

Valente dusted herself down to claim victory with 124 points from world champion Yumi Kajihara, who was roared on by the fans who have been such a feature in the velodrome - a contrast to the atmosphere at a largely silent Games.

Kajihara, who also crashed in the final laps, is the first Japanese woman to win an Olympic cycling medal - rewarding the fans who had looked downhearted earlier as Yuta Wakimoto and Yudai Nitta both failed to make the keirin final.

Kenny, who bagged a fifth Olympic gold medal when she won the madison earlier in the week, was sixth.

In a hectic final session Canada's Kelsey Mitchell won the women's sprint title - four years after taking up the sport.

After edging out Germany's reigning world champion Emma Hinze in the semi-finals, Mitchell timed her attacks to perfection to beat Ukraine's Olena Starikova 2-0 in the final - becoming only the second Canadian to win an Olympic track gold after Lori-Ann Muenzer took the women's sprint title in 2004.

"People talk about visualisation a lot in sports, and I don't know if I did it on purpose, but I could see myself on the podium. I decided to go and execute it," she said.

Kenny told reporters he thought it would be his wife Laura who would be completing the clock face of gold medals they could hang on the wall of the Cheshire home they share with son Albie.

But while her day did not go as planned, he went on to become the first British athlete to win nine Olympic medals in any sport, going in front of fellow cyclist Bradley Wiggins who he had been tied with on eight.

Asked about his records, Kenny was modest as ever.

"I remember watching (rower) Steve Redgrave win five gold and it was just absolutely amazing and so it's really special to be kind of on the same page with those guys," he said.

And at the end of a week in which Britain's domination of Olympic track cycling has come under a sustained attack, Kenny ensured they are just about top of the pile.

Britain finished level on three golds with the Netherlands but had one more medal in total. 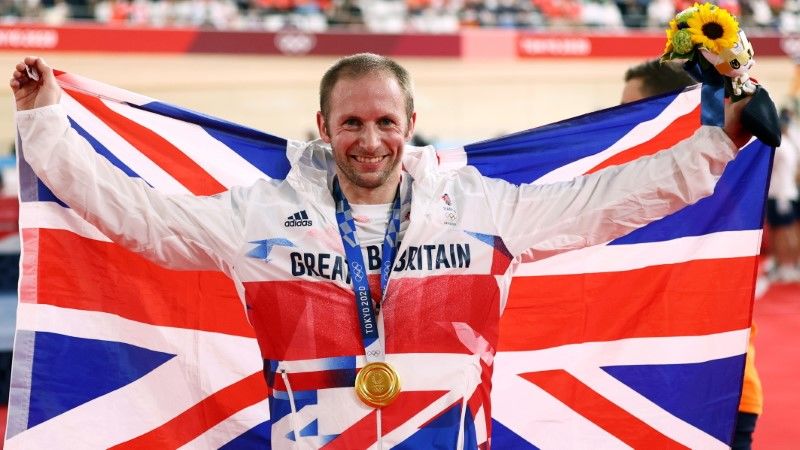 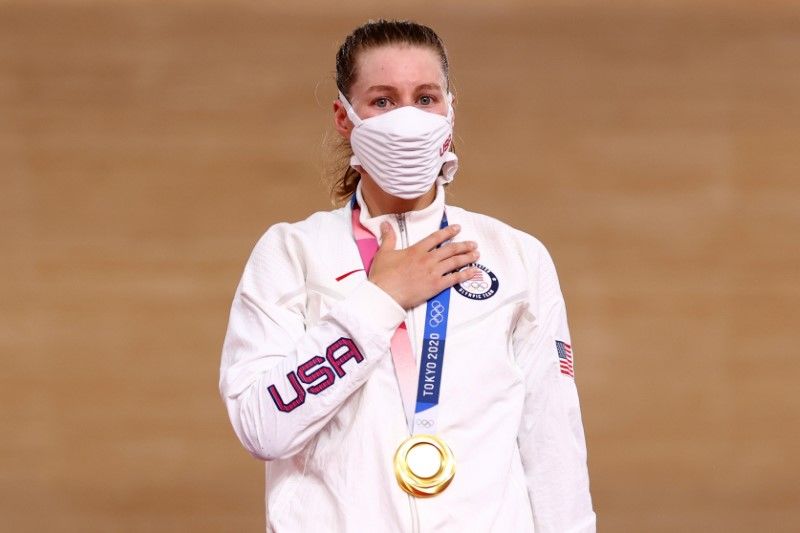