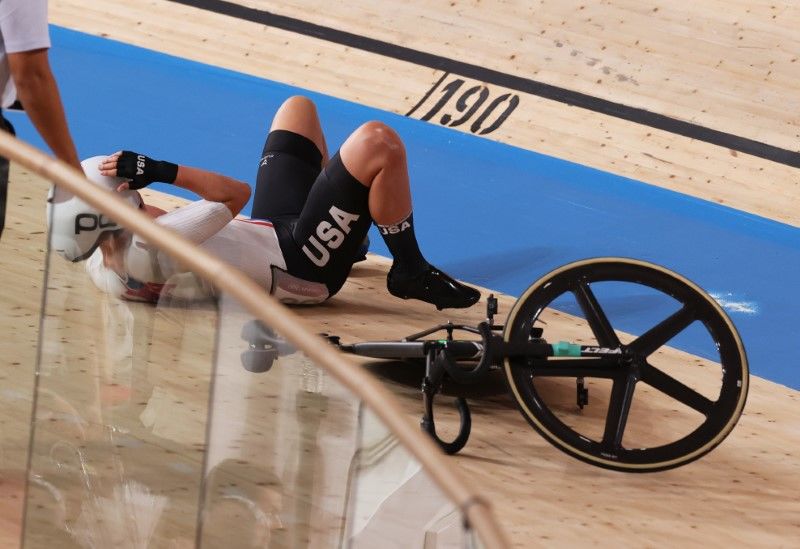 IZU, Japan (Reuters) - American Jennifer Valente started the final leg of her women's Olympic omnium event in pole position at the Izu Velodrome but a late crash threatened to jeopardise her bid for the gold medal on Sunday.

With 22 laps to go, Egyptian rider Ebtissam Zayed Ahmed crossed wheels with Valente and both riders hit the ground hard.

"I think there was a moment of panic and just trying to take a breath and assess the situation and figure out where I was at and where it put me," Valente told reporters. "Then I just kept fighting the last 20 laps."

Valente went on to show great fighting spirit as she propelled herself to the front of the field, eventually securing America's first Olympic track cycling title since 2000.

When she crossed the line and realised she had won the race, an exhausted Valente rode into the crowd of American coaches and fell to the ground.

The 26-year-old, who also became the first American woman to win an Olympic track cycling title, posed for pictures after wrapping herself in an American flag.

"There were probably 100 emotions running through me, and I think the biggest thing is that none of them had really set in yet," Valente said.

"It's been really emotional and it's been a long five years and I'm so happy to get this result."

The American track cycling team has had little to cheer this week but will have been relieved to see Valente adding an individual gold to Tuesday's team pursuit bronze.

"With my team mates, we won silver in the team pursuit in Rio (2016) and bronze here," Valente added.

"I think just trying to build with that energy, and in continuation, this had always been a goal. To achieve that, it just opens your eyes to continue to look forward and find new opportunities and new goals in the future."

(Reporting by Hardik Vyas in Bengaluru; editing by Clare Fallon)