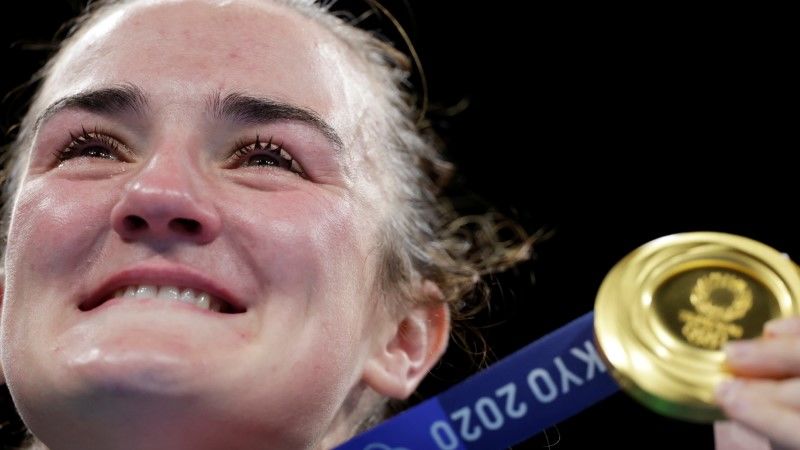 TOKYO (Reuters) - Humility and quotes from the movie "The Lion King" are not qualities normally associated with boxers, but they carried Ireland's Kellie Harrington to Olympic gold in the women's lightweight division on the final day of the Games.

As Harrington carried the Irish flag into the stadium at opening ceremony of the Tokyo Games, she stopped her team to bow to the Japanese people to show their gratitude for the Games taking place.

She swapped bowing for a serene mantra as she made it through to the gold medal bout taken from the Disney movie 'The Lion King' -- "hakuna matata", which means "there are no worries" in Swahili.

It's par for the course for the 31-year-old, whose technical displays saw her crown her amateur career in the best way possible by beating Brazil's Beatriz Ferreira on points to claim the gold.

"We're Irish. We're a country of people who just love to give, and that's just what we showed on that day. I'm so thankful that the Olympics was able to go ahead and I just wanted to thank the people of Japan for allowing this to happen," she told reporters of the Irish bow.

"I just felt we wanted to say 'thank you', and that's what we did as a team, we bowed because I know that bowing is a mark of respect in Japan."

Harrington gave credit to her opponents, especially those who won medals in her class.

"It's just an amazing feeling, to be getting in there and knowing that two of the best are putting it all on the line, I just think for anyone who steps through the ropes, we're already champions," she said.

"I said it before I was standing on that podium today, and the four of us are cream. We rose to the top."

Asked what her colleagues and the patients at St. Vincents Hospital in Dublin where she works would have to say about her gold medal, Harrington's smile broadened.