Factbox-Tokyo Games in the shadow of the pandemic 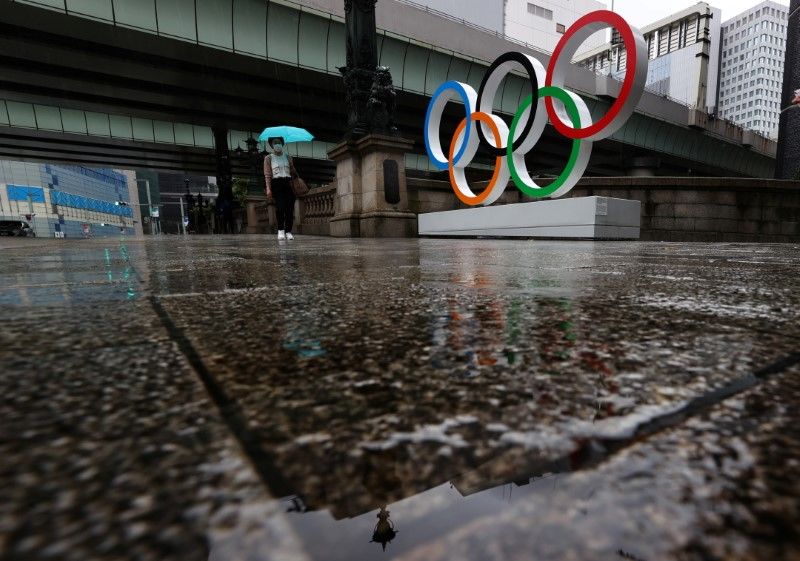 A woman wearing a protective face mask, amid the coronavirus disease (COVID-19) outbreak, walks past the Olympic Rings on the last day of Tokyo 2020 Olympic Games, in Tokyo, Japan, August 8, 2021. REUTERS/Kim Kyung-Hoon

(Reuters) - As the Olympics nears its close, here is a look at how it played out under strict restrictions to ensure a "safe and secure" Tokyo 2020 amid a COVID-19 pandemic.

Inside the Olympic "bubble" where athletes and others involved in the Games have spent the past two weeks, a total of 430 COVID-19 cases had been reported as of Sunday.

While organisers have touted the low infection rate among what they call the world's "most tested community", the Games have coincided with a surge in cases https://www.reuters.com/lifestyle/sports/tale-two-cities-bubble-tokyo-outside-2021-07-29 in the host city.

Tokyo has reported record daily case numbers in the past week and the number of infections in Japan has increased by more than 140,000 since the Olympics began on July 23. Prime Minister Yoshihide Suga and Games organisers have reiterated that the event had not contributed to rising infections.

But senior medical adviser Shigeru Omi told parliament https://www.reuters.com/world/asia-pacific/japans-covid-19-infections-have-entered-new-phase-says-health-minister-2021-08-04 that hosting the Games may have affected public sentiment and eroded the impact of government requests for people to stay home.

Outside of the Olympic bubble, Japan has defended a new policy of asking patients with milder symptoms to isolate at home rather than going to hospital.

Prime Minister Suga has said only patients who were seriously ill https://www.reuters.com/world/asia-pacific/japan-covid-cases-hit-1-million-infections-spread-beyond-tokyo-2021-08-06 and those at risk of becoming so would be hospitalised, while others should isolate at home, a shift in policy some fear may lead to an increase in deaths.

Both foreign and domestic spectators were mostly absent from the Games, a decision taken by organisers to reduce the potential risks of virus transmission.

At some events, noisy delegations https://www.reuters.com/lifestyle/sports/olympics-an-olympics-without-spectators-noisy-delegations-make-up-absent-fans-2021-07-27 made up for the lack of spectators, while announcers at other events tried to hype what little crowd they did have to cheer on the athletes.

Since most athletes were unable to bring their families to Tokyo, organisers set up special screens where athletes could see live feeds of their cheering family members after completing their competitions.

Isolation and the absence of family and friends, however, took a toll on athletes' mental health https://www.reuters.com/lifestyle/sports/pandemic-takes-toll-athlete-mental-health-tokyo-games-2021-07-28, with some struggling to cope with the challenges posed by the pandemic while carrying their country's hopes on the global sports stage.

The International Olympic Committee (IOC) said the lack of spectators did not dent any excitement over the Games and that many viewers were still able to enjoy the event through TV and other platforms https://www.reuters.com/lifestyle/sports/surfing-skating-boosts-viewership-lack-fans-has-zero-impact-ioc-2021-08-03.

Though most venues did not allow spectators, crowds gathered outside the National Stadium for a glimpse of the opening ceremony and many lined the streets https://jp.reuters.com/article/olympics-2020-tri-idCNL8N2P70L6 to watch the triathlon.

While most of the public remained opposed to the Games leading up to its opening, there have not been more recent polls since the start of the Olympics to compare public sentiment.

Voter support, however, for the government slid to 34%, https://www.reuters.com/world/asia-pacific/support-japans-pm-suga-slides-tokyo-games-underway-2021-07-26 the lowest since Prime Minister Suga took office last September.

The IOC has touted the high TV viewership https://www.reuters.com/lifestyle/sports/surfing-skating-boosts-viewership-lack-fans-has-zero-impact-ioc-2021-08-03 of the Games to show the Japanese public's support of the event. The IOC has said that 113.5 million Japanese watched some coverage of the Games as of Aug. 1.

There were intermittent protests at the Games, including outside the National Stadium during the opening ceremony, but none large enough to significantly disrupt any of the events.