FACTBOX-Five financial implications of the Olympics 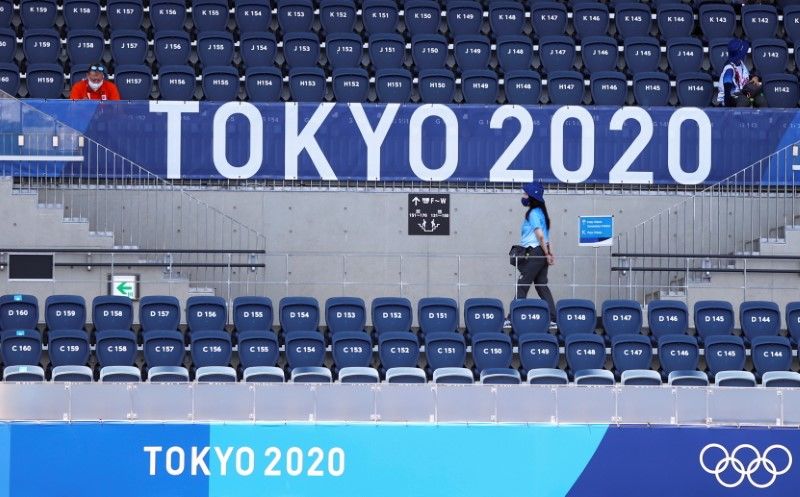 FILE PHOTO: A spectator sits as a volunteer walks beaneath a logo during the Tokyo 2020 Olympic Games in at the Oi Hockey Stadium in Tokyo, Japan, July 24, 2021. REUTERS/Siphiwe Sibeko

(Reuters) - The close of the Tokyo 2020 Olympics does not mean the end of financial questions surrounding an event that went ahead without spectators and cost more than twice as much to host as initially planned.

The bill for the Tokyo Olympics and Paralympics is expected to be 1.64 trillion yen https://myinfo.tokyo2020.org/general-search/facts-and-stats-tokyo-2020-olympic-and-paralympic-games ($15 billion), 22% higher than it was before the Games were delayed in 2020. That figure is also twice as much as the 800 billion yen estimate Tokyo submitted in its bid to host the games.

The bill, which will have to be fully funded after the Games end, is split three ways among the Tokyo 2020 organisers, Tokyo Metropolitan government and Japan’s central government. The host city is responsible for the biggest chunk.

Before the decision in 2020 to delay the Games, 4.48 million tickets had been sold, which had been expected to generate 90 billion yen https://jp.reuters.com/article/uk-olympics-2020-tickets-idAFKCN2DX139 ($816 million) in revenue. That figure will now be close to zero.

The Tokyo organising committee is responsible for ticket sales, and after using up much of its event cancellation insurance policy, is unlikely to get much of a pay-out https://www.reuters.com/business/finance/local-olympics-organisers-face-uninsured-loss-spectator-ban-sources-2021-07-12 on lost ticket sales, according to insurance industry sources.

Ratings agency Fitch estimates the total insured cost of the Olympics at around $2.5 billion, with analysts at Jefferies saying $2 billion is on TV rights and sponsorships and $600 million for hospitality.

Travel and hospitality groups and the International Olympic Committee could face losses due to disruptions from the spectator ban and claims on their event cancellation policies, sources said.

The Olympics are typically insured by firms such as Lloyd's of London, Beazley and Tokio Marine Kiln.

Reinsurers, which insure the insurers, may face the bulk of any claims, which according to Fitch could be as much as $400 million.

In Japan alone 60 Japanese companies, including Toyota, Bridgestone, and Panasonic, paid a record of more than $3 billion to sponsor the Games. They forked out another $200 million after the Olympics were postponed.

While they would normally look to recoup that outlay from sales linked to interest in the Olympics, some big corporate names worried about the potential damage to their brands as public opinion in Japan turned against the Games.

Toyota chose not to run https://www.reuters.com/lifestyle/sports/two-thirds-japanese-doubt-pandemic-olympics-can-be-safe-says-poll-2021-07-19 Olympics-related TV commercials in Japan. Others, including Panasonic, had to scale back client entertainment plans at Games venues after spectators were banned.

A key reason for Japan to host the Olympics was to boost tourism, which in the decade before the pandemic halted most international travel had quadrupled to more than 30 million visitors a year.

In 2019 they spent nearly 4.81 trillion yen https://www.reuters.com/article/us-olympics-2020-cancellation-economy-fa-idUSKBN20Q0MD ($43.6 billion) in Japan at hotels, restaurants, shops and for other services.

A normal Olympics could have added 0.33% to gross domestic product (GDP), or around 1.8 trillion yen, Nomura Research Institute estimated before the Games.

Instead, Japan's government has to convince an already sceptical public that hosting the Olympics was the right decision even without the economic windfall.