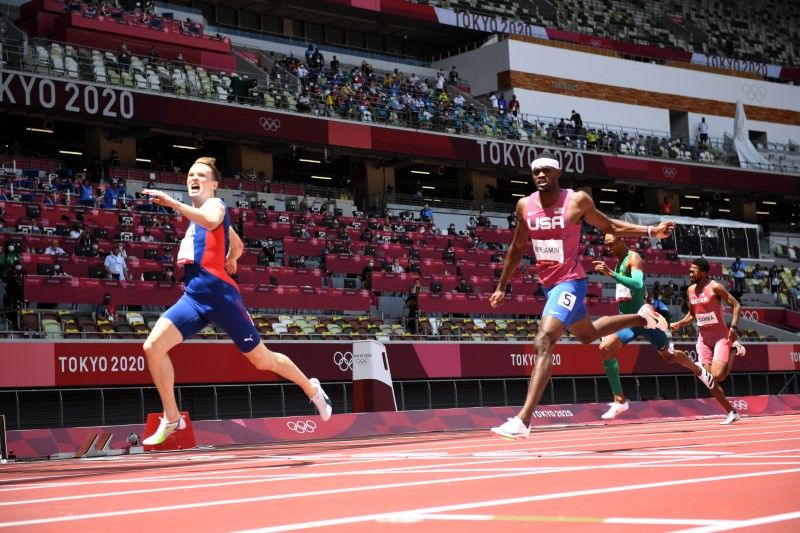 TOKYO (Reuters) - Two incredible 400m hurdles races, a women's sprint clean sweep, a stunning 100m shock and a shared high jump gold medal will be the indelible athletics memories from the Tokyo Olympics as the sport showed there is life after Usain Bolt.

Yet hovering above the stellar displays was the twin shadow of "performance-enhancing shoes" and a super-speedy track, that has fans never quite sure how to judge what they are seeing against some of the greats of the past.

Karsten Warholm's battle with American Rai Benjamin saw the Norwegian destroy his own world record by .76 seconds - a huge margin for a one-lap race - with Rai also well inside his own mark.

The scenario was then repeated in the women's race when Sydney McLaughlin shattered her own world record ahead of fellow American Dalilah Muhammad also inside the old mark.

Warholm then spoke out to criticise the thick-soled shoes of his rival, despite also wearing spikes with a carbon plate that unquestionably improves performance.

With the designer of the Tokyo track saying its technology could be worth up to a 2% performance benefit it becomes understandable why Geoff Burns, a biomechanics expert, said: "We just have to stop getting excited about fast times."

World Athletics President Sebastian Coe repeated his belief that his organisation "should not stifle innovation".

"It is an important issue and I'm not minimising it but I don't think we are leaving here where what we've seen on the track is anything but credible," he said.

The improved times also filtered down to the sprints, where Elaine Thompson-Herah completed a brilliant 100m/200m double before completing a clean sweep as Jamaica won the 4x100m relay.

Her times make her the fastest woman alive over both distances, second in the all-time lists only to late American Florence Griffith-Joyner.

If Thompson-Herah's brilliant repeat of her Rio double was predictable, the men's 100m, the first after Bolt's hat-trick, was the exact opposite with Lamont Marcell Jacobs winning a race where Italy had never previously won a medal.

The converted long jumper, who had never broken 10 seconds before this season, pulled off a stunning victory in a European record of 9.80 seconds.

He also took part in a breathtaking 4x100m relay victory as Italy won five golds in all, their best achievement in the sport at an Olympics.

There was a third world record, also a huge one, for triple jumper Yulimar Rojas as she became the first woman Olympic champion from Venezuela, while Neeraj Chopra's javelin gold was the first in the sport for India.

Burkina Fasa became the 100th country to win an athletics medal - Hughes Fabrice Zango's triple jump bronze - and the sport's governing body wheeled out a sack of statistics on Sunday to underline its truly global reach.

A record 83 nations reached finals, there were 43 teams on the podium and 23 winning gold. There were three world records, 12 Olympic records, 28 area records and 151 national records set.

The United States topped the medal table with 26, including seven golds, but it was a thin time for their usually all-powerful men's squad, with only their 4x400m relay team winning gold on the track.

It was a different case for the women, topped off by the peerless Allyson Felix. The 35-year-old became the most decorated female track and field athlete in Olympic history with 11 medals, after winning gold in the 4x400m relay and bronze in the individual 400m.

But if one moment summed up the spirit of the whole Olympic movement it was probably in the men's high jump.

Qatar’s Mutaz Barshim and Italy’s Gianmarco Tamberi, both of whom have returned from the same career-threatening injury, agreed to share the gold medal and both exploded in joy when officials agreed.