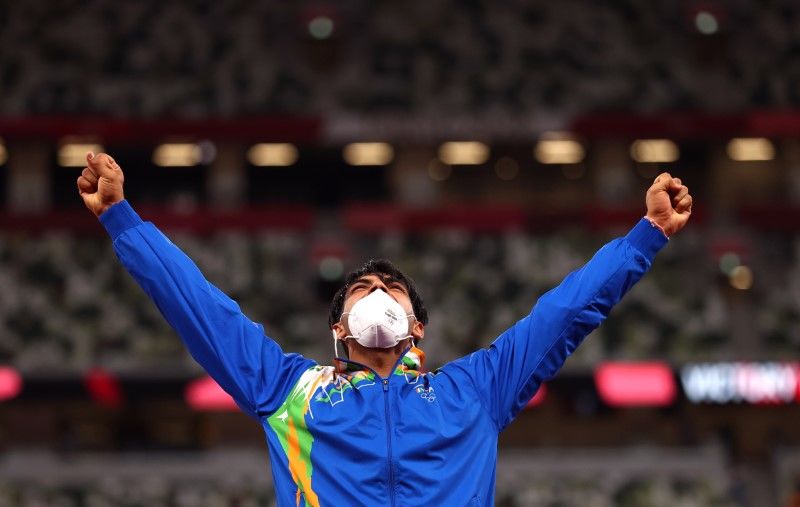 TOKYO (Reuters) - Neeraj Chopra's soaring javelin did not just earn India their first Olympic gold in athletics on Saturday, it also meant that the contingent will return from Tokyo with seven medals, their biggest Games haul ever.

The world's second most populous nation has been an Olympic laggard and the six medals the contingent won in London 2012 was the best outing for the nation of 1.35 billion before Tokyo.

The country's sports ministry accepted that in the past preparations had not always been ideal for athletes headed to the world's grandest multi-sport gathering.

The officials pledged full support to the participants this time, while setting the goal of improving India's Olympic medal tally to a double digit in Tokyo.

But going into the final day of competition for the team, India were not only short of fulfilling that promise but were one medal short of their London haul.

Tokyo appeared set to be just another Games where India, long starved of Olympic success, would watch its athletes return home with meagre returns.

During Saturday's early session, wrestler Bajrang Punia's bronze in the 65kg category took India to six by winning bronze but it was not enough to lift the sagging spirits in a country left reeling by the impact of COVID-19.

The 23-year-old Chopra was their last hope and he had whetted appetites by finishing top of the standings during the heats.

He did not disappoint, sealing the title with his first two throws.

India's best-ever Olympic show came despite an underwhelming performance from their shooters - usually their most consistent athletes in recent Games.

While boxing was also expected to bring more than a single bronze medal, there were also a few near misses - the women's hockey team, Aditi Ashok in women's golf and Deepak Punia in men's freestyle 86kg wrestling finished fourth to miss out.

Particularly satisfying were their exploits in a game they once dominated with clinical ruthlessness - hockey.

The women's team were lauded as superstars with their fourth spot while a euphoric India celebrated the country's first hockey medal in 41 years, hoping the hard-earned men's bronze would help them to regain their past glory.

The most successful hockey nation in Olympic history, with eight men's titles, India had not won a medal since the 1980 Moscow Games when they topped the podium.

Chopra's gold ensured that all was not lost for the Olympians, who are dwarfed by the country's cricket stars when it comes to sponsorship and popularity.

Abhinav Bindra, whose 10-metre air rifle triumph at the 2008 Games was India's lone gold medal previously, summed up the enormity of Chopra's success.

"To win a gold at the grandest sporting event in the world, which is held once every four years, is in itself so improbable that less than 3% of the 11,707 athletes competing in Tokyo will end up with one," Bindra said in a letter to Chopra posted on social media.

"Add to it the weight of expectations from an extremely proud nation starved of Olympic success, and your achievement becomes even more memorable.

"The impact your victory will create on promoting your sport amongst the country's youth is immeasurable. You have crossed the first barrier; the gates are now firmly open.

"Budding Olympians will now look up to you as they set out to fulfil their dreams of bringing glory to the nation. Thanks to you, we have finished our Tokyo endeavour on a great high."