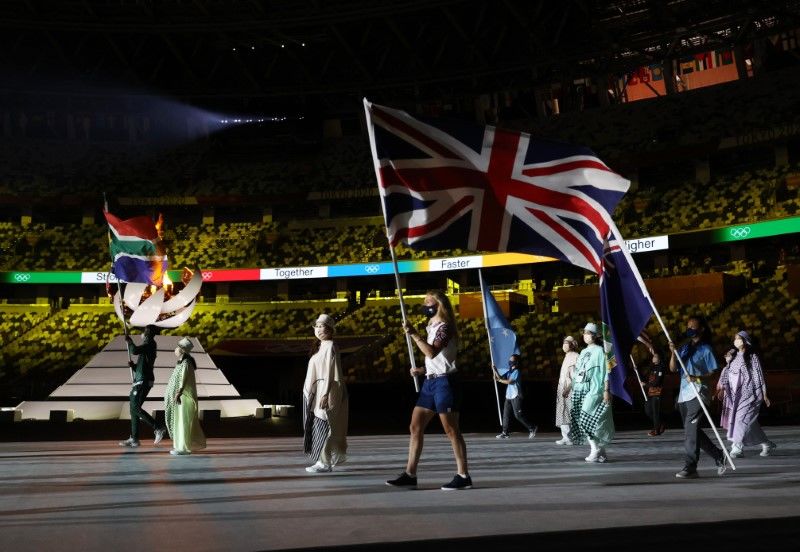 TOKYO (Reuters) - Britain's chef de mission Mark England hailed the team's achievement as the greatest in their Olympic history after the team matched their medals total from their home games in London in 2012 on the final day of competition in Tokyo.

Track cyclist Jason Kenny and boxer Lauren Price ensured that Britain finished their campaign with two more gold, taking them to fourth in the Tokyo medals table with 22 gold, 21 silver and 22 bronze medals for a total of 65.

It made Tokyo their second-most successful Olympics overseas after the contingent won 67 medals in the Rio de Janeiro Games five years ago.

"Following Beijing we had no idea that British athletes would deliver 65 medals in London. We knew we were in great shape for Rio but it had never been done before, matching and then surpassing London's number of medals," England told reporters on Sunday.

"I just think that finishing this Games with two gold medals, and for this team to deliver 65 medals, is absolutely extraordinary.

"Not only has the team made history but it has probably made history on the back of the most complex and most challenging and difficult environment that we will face certainly in my lifetime.

"It has been against all the odds and I think it is the greatest achievement in British Olympic history. It has been the miracle of Tokyo and it has been wonderful to be here."

The next Olympic Games are in less than three years and England believes the youthful side would be in great shape heading into Paris.

"The Bryony Pages of this team, winning another (trampoline) bronze after her silver medal in Rio, and the women's artistic gymnastics team winning a bronze with two 16-year-old twins -- these kept the scoreboard ticking over and gave everybody the confidence that the team is in great shape," he said.

"We've had 16 fourth places. This is a very, very young team and a very talented team, and a team I'm absolutely confident that will go to Paris in less than three years and do exceptionally well."

The British Olympic Association and UK Sport had previously announced a change of approach towards funding, which was previously targeted narrowly at potential medallists, amid an athlete welfare crisis and various governance problems.

The organisation said last year that it would be taking a more holistic approach towards Olympic funding, with positive culture at its core, raising fears that a softer approach might lead to a drop in results.

"I'm thrilled that we are in a better place now and we certainly haven't seen any drop-off in performance," said Katherine Grainger, Chair Of UK Sport.

"If anyone was unconvinced before hopefully they would be convinced now."