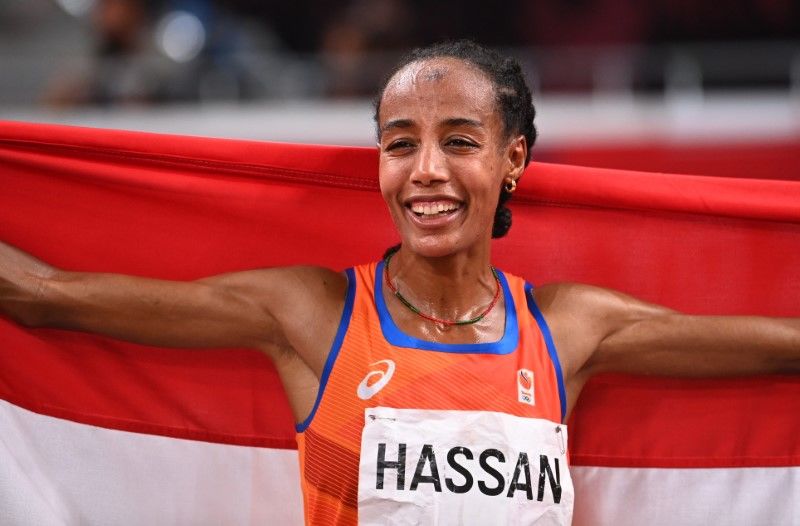 TOKYO (Reuters) - An innocuous question from a friend set Sifan Hassan of the Netherlands on her quest for triple gold at the Olympics, she explained on Sunday as she headed home with two golds and a bronze.

The Ethiopian-born Dutch runner won the 5,000 and 10,000 metres, and finished third in the 1,500m, in a hectic programme at the Tokyo Games and said all she wanted to do afterwards was sleep.

"I was so tired, I didn't even dream about those medals," she said in an interview on Dutch NOS television.

"It was especially nice when I woke up, because I had no more stress. I made it happen. Fantastic."

She said the plan to run three different distances in Tokyo started a year ago as a joke.

"A friend of mine, who doesn't understand athletics, said, 'Why don't you run three distances?' At first I had to laugh, but then I thought, ‘nobody does that’. So I started training very hard."

She kept her plans close to her chest and even when she got to Tokyo it was still not clear what her intentions were.

"I'm not afraid of anything, I just want to challenge myself, otherwise I find it boring. One distance is nothing, so I just wanted to try the triple.”

The achievement has placed her among the Tokyo Games’ outstanding achievers and has already got her thinking about Paris in three years’ time.

Asked if she might try the marathon at the 2024 Olympics, she said: "Yes, I would like to think about that. I always thought long distances were boring, but I actually enjoy how tired you get. If you run such a long distance and finish it, I enjoy that. Everything gets easier after that."

She said she had run all her races in Tokyo with a thigh niggle but still felt strong.

"Mentally I am tired, but not physically. I have trained so much and done so many miles for a reason. We humans are so special in how we deal with everything. We are really much better than we think. Ups and downs make you stronger, as long as you don't lie down. It's about getting up and moving on.

“I'm just a crazy person who follows her dreams," she added.