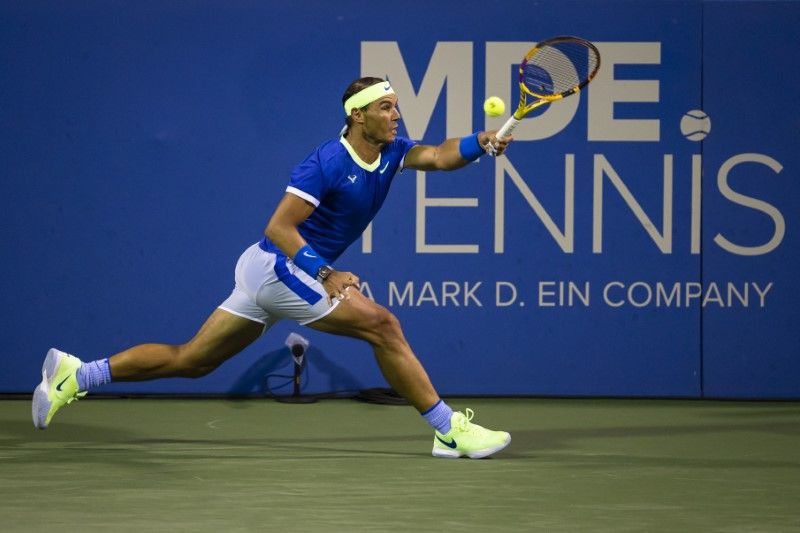 LONDON (Reuters) - Rafa Nadal said on Sunday he had not yet fully recovered from a foot issue that kept him out of Wimbledon and the Tokyo Olympics but hopes a U.S. Open tune-up event in Toronto will help him to regain confidence in his on-court movements.

Nadal's first event since his semi-final loss at the French Open ended in a shock third-round exit in Washington on Thursday and the Spaniard admitted his left foot was holding him back.

"It's been a couple of tough months for me in terms of physical issues," world number three Nadal told reporters at the Masters 1000 event in Toronto, where first-round action starts on Monday.

"I know I am not at my peak yet but I think I have been practising better than what I played in Washington so I am excited to keep going here and be able to play a little bit better than there."

Nadal said a recurring foot issue he has been dealing with since 2005 returned at Roland Garros, where he fell to eventual champion Novak Djokovic in the semi-finals before deciding to sit out two of the year's biggest events.

"After Paris my foot was not recovering. I was in a lot of pain for a couple of weeks so I couldn't train. I stayed around 20 days without touching a racquet, trying to recover."

Nadal, who as the second seed in Toronto has a first-round bye, said that while he would like to taste victory before heading to the Aug. 30-Sept. 12 U.S. Open his main focus is regaining confidence in his foot.

"I really need to have a couple of weeks with less pain to have the confidence again on my movements, knowing that I will be able to go out and compete for a long time ... that's something that I am looking for in this tournament."