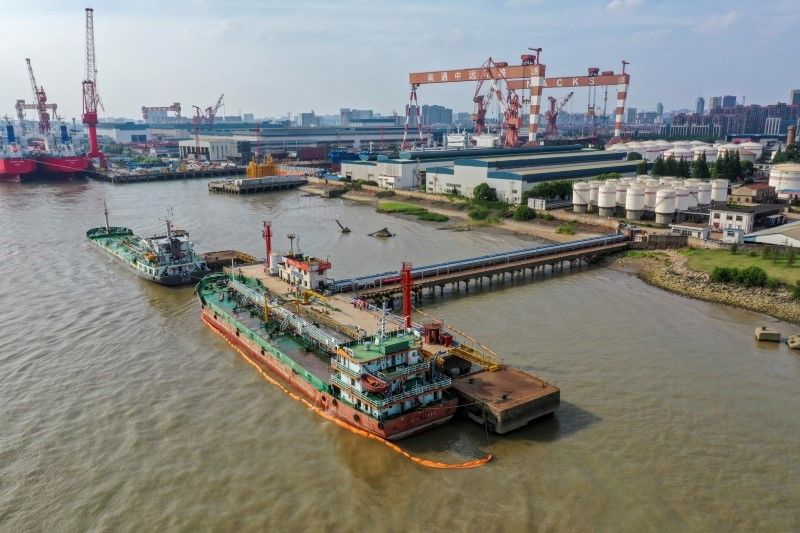 NEW YORK (Reuters) -Oil prices fell over 2% to a three-week low on Monday, extending last week's steep losses on the back of a firmer U.S. dollar and concerns that new coronavirus-related restrictions in Asia, especially China, could slow a global recovery in fuel demand.

Those were the lowest closes for both benchmarks since July 19. In intraday trade, WTI fell to its lowest level since May.

"Crude prices are declining as a slowdown in Asia disrupts the demand outlook," said Edward Moya, senior market analyst at OANDA, noting "a stronger dollar theme is (also) starting to emerge given the recovery story in the United States and that might be a short-term drag for crude prices."

Wall Street banks Goldman Sachs, JPMorgan and Morgan Stanley all cut their China growth forecasts on Monday, after export growth slowed unexpectedly and on concerns that the resurgent coronavirus could crimp economic activity.

China reported 125 new COVID-19 cases on Monday, up from 96 a day earlier. In Malaysia and Thailand, infections hit daily records.

China's crude oil imports fell in July and were down sharply from the record levels of June 2020.

A rally in the U.S. dollar, which hit a near three-week high against a basket of other currencies, also weighed on oil prices after Friday's stronger-than-expected U.S. jobs report spurred bets that the Federal Reserve could move more quickly to tighten monetary policy.

A stronger U.S. dollar makes oil more expensive for holders of other currencies.

Atlanta Federal Reserve Bank President Raphael Bostic said the U.S. economy is improving faster than expected and inflation was already at a point that could satisfy one leg of a key test for the beginning of rate hikes.

U.S. gasoline futures slid less than crude, boosting the gasoline crack spread - a measure of refining profit margins - to its highest close since hitting a record in April 2020 when WTI settled in negative territory.

Fuel demand in India, meanwhile, rose in July to its highest since April as pandemic restrictions and lockdowns were unwound in most states, boosting industrial activity and mobility.

Analysts said the oil market was looking for direction from monthly data due this week - the U.S. Energy Information Administration on Tuesday, and the Organization of the Petroleum Exporting Countries and the International Energy Agency on Thursday.