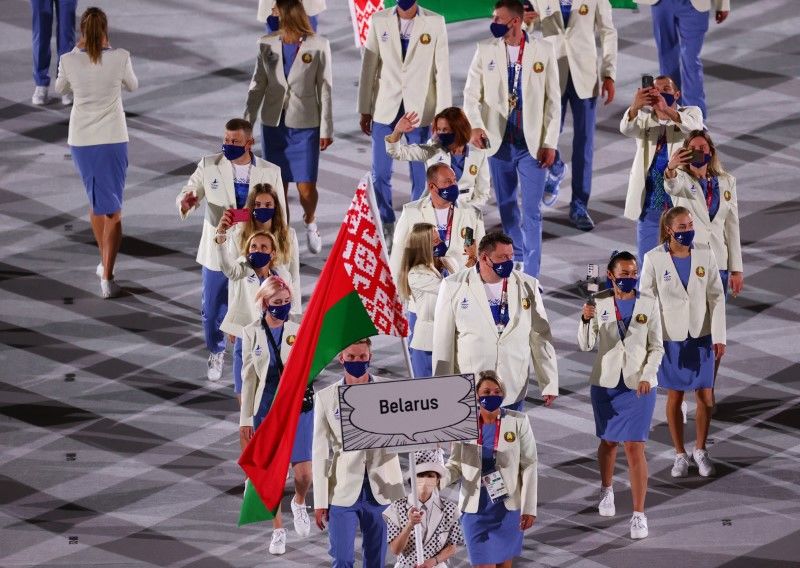 MOSCOW (Reuters) - The Belarusian Olympic Committee (BOC) on Tuesday dismissed U.S. sanctions, imposed against it for alleged facilitation of money laundering and evasion of existing sanctions, as baseless and absurd.

Washington on Monday slapped new sanctions on several Belarusian individuals and entities, including its Olympic committee, with the aim of punishing hardline president Alexander Lukashenko.

During the Tokyo Olympics, Belarusian sprinter Krystsina Tsimanouskaya refused to board a flight home after being taken to the airport against her wishes by Belarusian officials. She has since sought asylum in Poland.

In a statement, the BOC said it would be "grateful to our American 'partners' if they could come up with proof" of corruption and other alleged wrongdoing.

"They do not take into account the fact that that the activity of the BOC is scrupulously audited by the International Olympic Committee and is in compliance," it added.

It accused Washington of acting out of political motives, and said that, if the IOC was not involved, such action "looks totally absurd":

"We see the decision as absolutely baseless. It causes only perplexity and pity."

The BOC has said coaches withdrew Tsimanouskaya from the Olympics on doctors' advice about her emotional and psychological state. Tsimanouskaya said https://www.reuters.com/world/europe/exclusive-belarusian-sprinter-decided-defect-way-airport-family-fears-about-2021-08-05 she was not political, and had been pulled out from "high up" after criticising the team's coaches.

Lukashenko said on Monday that she had defected only because she had been manipulated by outside forces.

Western governments have sought to put pressure on Lukashenko, who is accused of rigging elections in August 2020 and of imprisoning or driving out all significant opposition leaders to prolong his now 27 years in power. He says he won the vote fairly, and that others were calling for a coup.