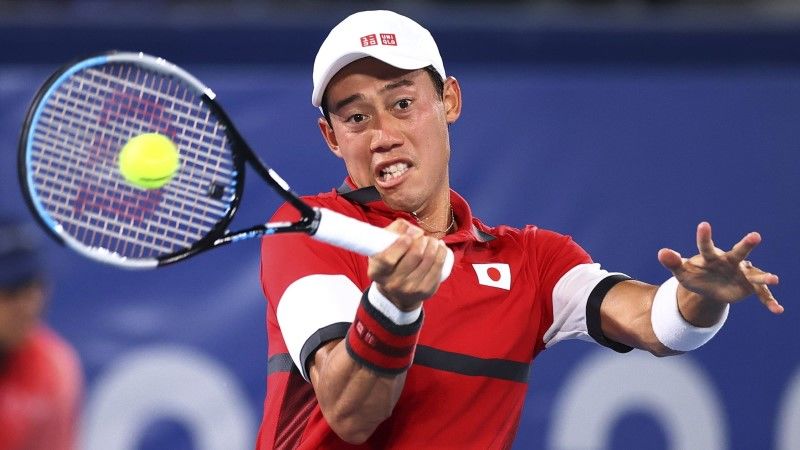 TORONTO (Reuters) - Japan's Kei Nishikori is still riding high after reaching the quarter-finals at the Tokyo Olympics and said on Tuesday he credits that deep run for his recent form in North America as he prepares for the U.S. Open.

Nishikori, who was Japan's last hope for a singles tennis medal in Tokyo, reached the semis last week in Washington and is now into the second round of the Masters 1000 event in Toronto after a 6-4 6-7(5) 6-2 win over Serbian Miomir Kecmanovic.

"I feel like from Olympics I ... start playing better," said 2016 Olympic bronze medallist Nishikori, whose Tokyo run ended in defeat to world number one Novak Djokovic.

"I don't really know why, but maybe, you know, it was big tournaments and also playing home, I know the venue for a long time, and I don't know why, but, yeah, from the first match against (Andrey) Rublev, I start playing so much better and more confidence coming up. I mean, it was good experience."

Nishikori, who prior to last week had not reached a semi-final since Barcelona in April 2019, converted his only break point of the first set against Kecmanovic before going on to take the opener.

Kecmanovic fought his way back with some aggressive tennis but Nishikori regrouped in time after losing the tiebreak to take an early lead in the decider and never looked back.

Nishikori will next face Polish seventh seed Hubert Hurkacz, who is in the midst of a breakout season that included a run to the Wimbledon semi-finals, for a place in the last 16.