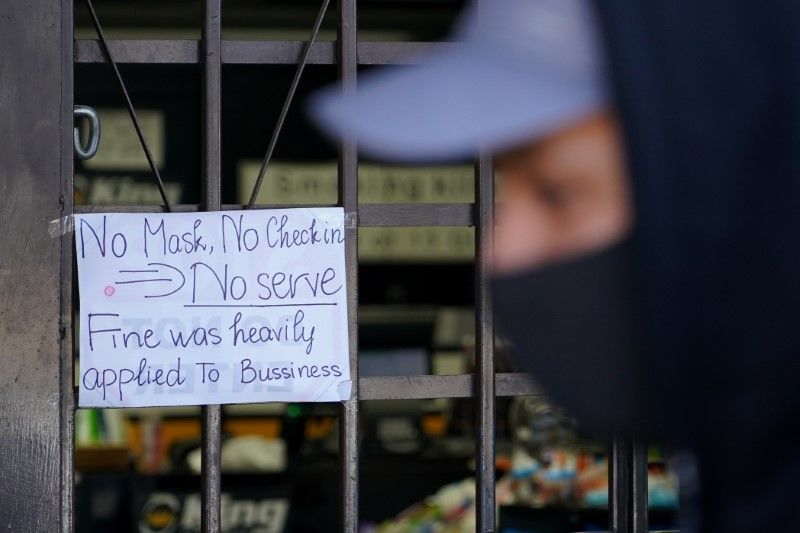 FILE PHOTO: A sign mandating the wearing of face masks inside is posted at the front of a shop during a lockdown to curb the spread of a coronavirus disease (COVID-19) outbreak in the Canterbury-Bankstown local government area of southwest Sydney, Australia, August 4, 2021. Picture taken August 4, 2021. REUTERS/Loren Elliott

South Korea reported more than 2,200 new daily COVID-19 cases, a record since the pandemic began, Health Minister Kwon Deok-cheol said on Wednesday, as the country grapples with its most severe outbreak.

Despite distancing measures in place for over a month, infections have spiked due to the spread of the more transmissible Delta variant and a rise in domestic travel over the summer, Kwon told a COVID response meeting.

He also noted a rise in so-called "silent spreaders" within communities such as workplaces, indoor gyms, churches and nursing homes, leading to an increase in infections of unknown origin.

Australia's second-biggest city, Melbourne, will stay locked down for a second week after reporting 20 new COVID-19 cases as it struggles to stamp out infections caused by the Delta variant.

Melbourne had been due to exit the lockdown on Thursday, the sixth for its 5 million people in stop-start battles against the coronavirus also seen elsewhere across the country, which have triggered frustration and discord. In Sydney police are stepping up lockdown enforcement, while some labourers are being allowed to return to construction sites - if vaccinated.

The Australian Olympic Committee has labelled the government of South Australia "cruel and uncaring" for imposing an extra two-week quarantine for athletes returning via Sydney from the Tokyo Games, meaning 28 days of quarantine in total.

Inoculations reach half of Cambodians

Cambodia has administered at least one coronavirus vaccine dose to half of its population, among the highest rates in Asia, official data showed on Wednesday, with vaccine diplomacy playing a key part in its success.

Cambodia, an ally of China and one of Asia's poorest countries, started inoculations with Chinese-made vaccines in February, while millions of doses provided by the United States, Japan and Britain have arrived in recent weeks.

Two coronavirus vaccines administered using a nasal spray being developed in Thailand are due to start human trials by the end of this year, after promising results in trials involving mice, a government official said on Wednesday.

Developed by the National Center for Genetic Engineering and Biotechnology, the vaccines are based on the adenovirus and influenza, deputy government spokeswoman Ratchada Thanadirek said.

The trials will also test protection against the Delta variant, Ratchada said, with the second phase due in March next year and a target of production for wider use in mid-2022, if results are good.

School districts in Florida and Texas are bucking their Republican governors' bans on requiring masks for children and teachers as coronavirus cases soar in conservative areas with low vaccination rates.

The Broward County school board in Florida on Tuesday became the latest major district to flout an order by Republican Governor Ron DeSantis outlawing mask requirements in that state, prompting the administration of U.S. President Joe Biden to say it was considering supporting the school districts financially if DeSantis retaliates against them by withholding funds from officials' salaries.