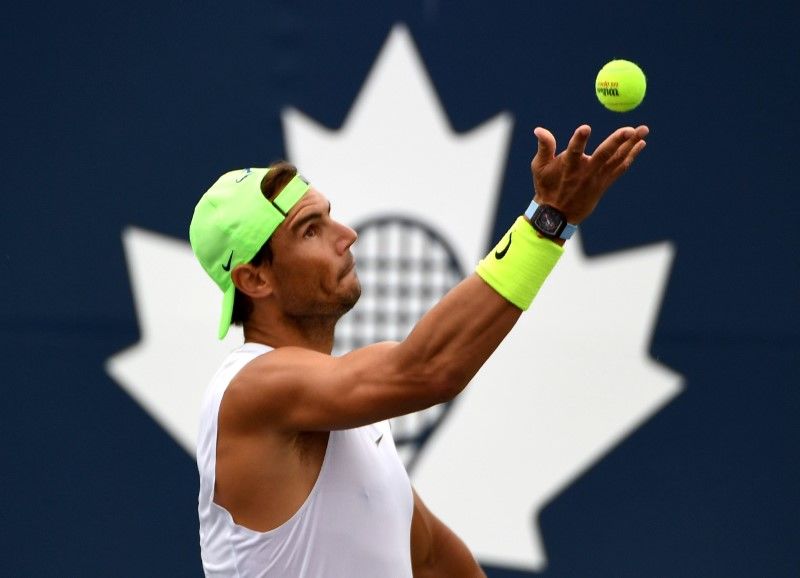 Aug 10, 2021; Toronto, Ontario, Canada; Rafael Nadal of Spain prepares to serve as he practices on a day off before playing in the National Bank Open at Aviva Centre. Mandatory Credit: Dan Hamilton-USA TODAY Sports

(Reuters) - Rafa Nadal's U.S. Open preparations have suffered another setback after the Spaniard withdrew from next week's Cincinnati hardcourt event with a nagging foot issue, organisers of the Masters 1000 tournament said on Wednesday.

Nadal suffered a shock exit last week in Washington, where he kicked off his lead-up to the U.S. Open, and on Tuesday pulled out of the ongoing Masters 1000 event in Toronto with a left-foot issue.

The Spaniard is the latest in a number of high-profile names to sit out next week's Western & Southern Open, joining a list that includes Novak Djokovic, Roger Federer, Serena Williams and Sofia Kenin.

In his pre-tournament news conference in Toronto on Sunday, Nadal said a recurring foot issue he has been dealing with since 2005 returned at the French Open, where he fell to eventual champion Djokovic in the semi-finals.

When discussing his Toronto withdrawal Nadal, who also sat out Wimbledon and the Tokyo Olympics, said: "With this pain, I am not able to enjoy, and I really don't believe that I have chances to fight for the things that I really need to fight."

Canadian Milos Raonic, who was runner-up at the 2020 Western & Southern Open, which was held in New York in a bid to limit travel ahead of the U.S. Open due to the COVID-19 outbreak, has also withdrawn from the Cincinnati event with a heel injury.