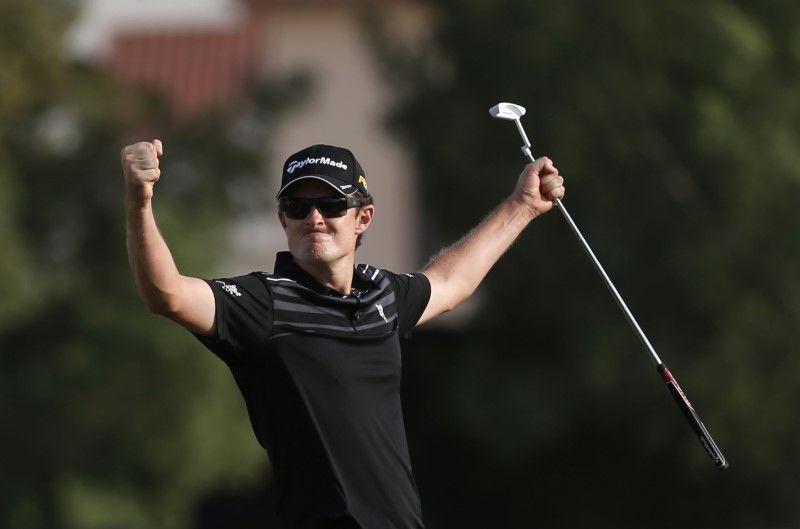 FILE PHOTO: Justin Rose of England reacts at the 18th green during the fourth and final round of the DP World Tour Championship at Jumeirah Golf Estates in Dubai November 25, 2012. REUTERS/Jumana El Heloueh

(Reuters) - Britain's Justin Rose was named the recipient of the PGA Tour's Payne Stewart Award on Wednesday, which honours a player for his character, sportsmanship and a commitment to charity.

Named after the three-time major champion Stewart, who died in a private plane crash in 1999, Rose will receive his award at a ceremony that will take place on Aug. 31 in conjunction with the Tour Championship in Atlanta.

"I am truly humbled and honored to be associated with the enduring legacy of Payne Stewart through this award,” Rose said in a statement. “The Payne Stewart Award has become an annual celebration of Payne’s impact on the PGA Tour and its players.

"I am forever grateful to be connected to a man who was the consummate professional on and off the golf course and will cherish being a Payne Stewart Award recipient well after my playing days are over.”

A former-world number one, Olympic gold medallist and U.S. Open champion, Rose is also respected for his charitable work.

In 2009 Rose and his wife Kate established their own foundation working with charities in South Africa, the United States, the Bahamas and England.

The charity has also partnered with "Blessings in a Backpack" to feed hungry children in the Orlando area and in 2019 after the devastation in the Bahamas from Hurricane Dorian, to help rebuild the Grand Bahamas Children’s Home.

"Justin Rose embodies everything the Payne Stewart Award represents,” said PGA TOUR Commissioner Jay Monahan. “Like Payne, he has been one of the premier players of his generation while using his platform to better the lives of those around him."

(Reporting by Steve Keating in Toronto. Editing by Toby Davis)