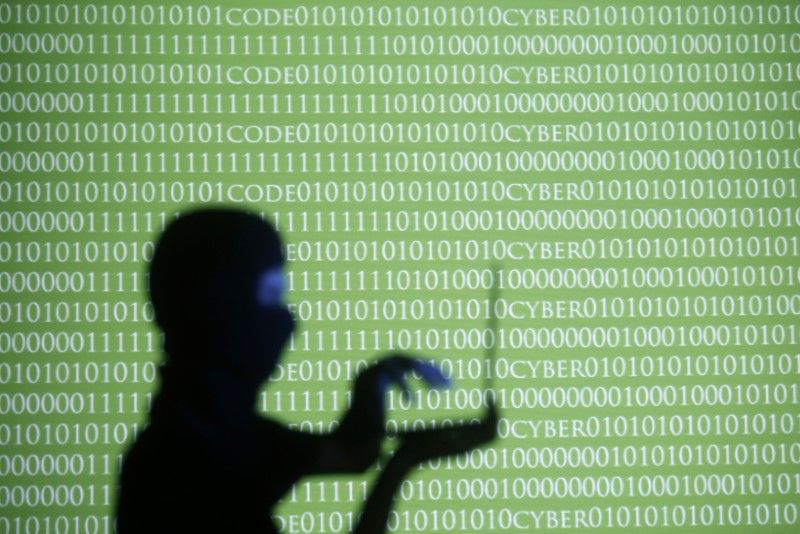 FILE PHOTO: A person wearing a balaclava is silhouetted as he poses with a laptop in front of a screen projected with the word 'cyber' and binary code, in this picture illustration taken in Zenica October 29, 2014. REUTERS/Dado Ruvic/File photo

LONDON/SINGAPORE/HONG KONG (Reuters) - Hackers behind one of the biggest ever cryptocurrency heists have returned more than a third of $613 million in digital coins they stole, the company at the center of the hack said on Wednesday.

Poly Network, a decentralised finance platform that facilitates peer-to-peer transactions, said on Twitter that $260 million of the stolen funds had been returned but that $353 million was outstanding.

The company, which allows users to swap tokens across different blockchains, said on Tuesday it had been hacked and urged the culprits to return the stolen funds, threatening legal action.

The hackers exploited a vulnerability in the digital contracts Poly Network uses to move assets between different blockchains, according to blockchain forensics company Chainalysis.

A person claiming to have perpetrated the hack said they did it "for fun" and wanted to "expose the vulnerability" before others could exploit it, according to digital messages shared by Elliptic, crypto tracking firm, and Chainalysis.

It was "always the plan" to return the tokens, the purported hacker wrote, adding: "I am not very interested in money."

The hackers or hacker have not been identified, and Reuters could not verify the authenticity of the messages.

Tom Robinson, co-founder of Elliptic, said the decision to return the money could have been prompted by the headaches of laundering stolen crypto on such a scale.

An executive from cryptocurrency firm Tether said on Twitter the company had frozen $33 million connected with the hack, and executives at other crypto exchanges told Poly Network they would also try to help.

"Even if you can steal cryptoassets, laundering them and cashing out is extremely difficult, due to the transparency of the blockchain and the broad use of blockchain analytics by financial institutions," said Robinson.

Poly Network did not respond to requests for more details. It was not immediately clear where the platform is based, or whether any law enforcement agency was investigating the heist.

The size of the theft was comparable to the $530 million in digital coins stolen from Tokyo-based exchange Coincheck in 2018. The Mt. Gox exchange, also based in Tokyo, collapsed in 2014 after losing half a billion dollars in bitcoin.

At $600 million, however, the Poly Network theft far outstripped the $474 million in criminal losses CipherTrace said were registered by the entire DeFi sector from January to July. The thefts illustrated risks of the mostly unregulated sector and may attract the attention of regulators.

DeFi platforms allow parties to conduct transactions, usually in cryptocurrency, directly without traditional gatekeepers such as banks or exchanges. The sector has boomed over the last year, with platforms now handling more than $80 billion worth of digital coins.

Proponents of DeFi say it offers people and businesses free access to financial services, arguing that the technology will cut costs and boost economic activity. But technical flaws and weaknesses in their computer code can make them vulnerable to hacks.

(Reporting by Alun John in Hong Kong, Tom Wilson in London and Tom Westbrook in Singapore; Editing by Michelle Price and Cynthia Osterman)