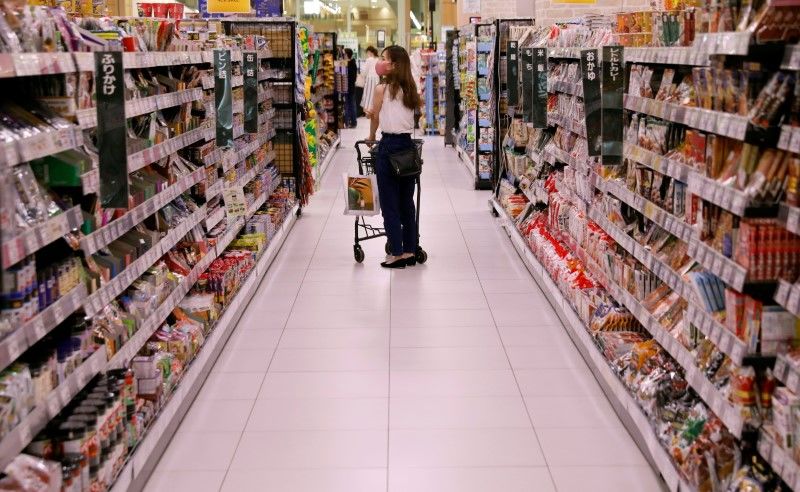 TOKYO (Reuters) - Japanese wholesale prices rose in July at their fastest annual pace in 13 years, data showed on Thursday, a sign that global commodity inflation and a weak yen were pushing up raw material import costs for a broad range of goods.

There is uncertainty, however, on whether companies will start to pass on the higher costs to households and prop up consumer inflation, which remains stuck around zero due to weak consumption, unlike in other advanced nations, analysts say.

"While wholesale inflation is accelerating at a very fast pace now, it will take time for this to lead to higher consumer prices," she said.

The corporate goods price index (CGPI), which measures the price companies charge each other for their goods and services, rose 5.6% in July from a year earlier, Bank of Japan data showed, increasing for the fifth straight month and beating a median market forecast for a 5.0% gain.

It accelerated sharply from a 5.0% increase in June and marked the fastest pace of growth since September 2008, when emerging market demand triggered a spike in prices dubbed the commodities "super cycle".

On a month-on-month basis, wholesale prices rose 1.1% in July after gaining 0.6%, marking the biggest increase in nearly two years.

Prices rose for many raw materials including those for wood, which spiked 33.1% in July from a year earlier, and oil and coal goods, which saw prices rise 38.8%.

Some countries, including the United States and Britain, have seen inflation rise faster than expected as demand recovers from the coronavirus pandemic, triggering debate on how quickly they should wean their economies off massive monetary stimulus.

Few analysts expect Japan to see the same kind of rise in consumer inflation. Slow vaccinations and curbs in activity to combat the pandemic have hurt consumption, discouraging firms from passing on higher costs to households.

The dynamics were evident in wholesale price data. Domestic final goods prices rose just 2% in July from a year earlier, even as raw material prices spiked 48%.

Back in 2008, Japan's annual core consumer inflation hit 2.4% in July and August on rising commodity costs, but slowed to 0.2% in December and started falling from March 2009.

The spike in inflation during the period was driven largely by a handful of raw material costs, with prices of most items staying roughly flat, the BOJ said in a report issued in July.

"Given such historical experience, any rise in consumer prices driven by increases in upstream costs will highly likely to be transitory," the BOJ report said.

Japan's economy has emerged from last year's slump thanks to robust exports.

But a resurgence in infections forced the government to impose fresh state of emergency curbs, dashing policymakers' hope for a strong rebound in July-September growth.

Core consumer prices rose just 0.2% in June from a year earlier due to weak household spending, well below the BOJ's elusive 2% target. Analysts expect a change in the base year from the July data, due on Aug. 20, to push down core consumer inflation by around 0.7 of a percentage point.