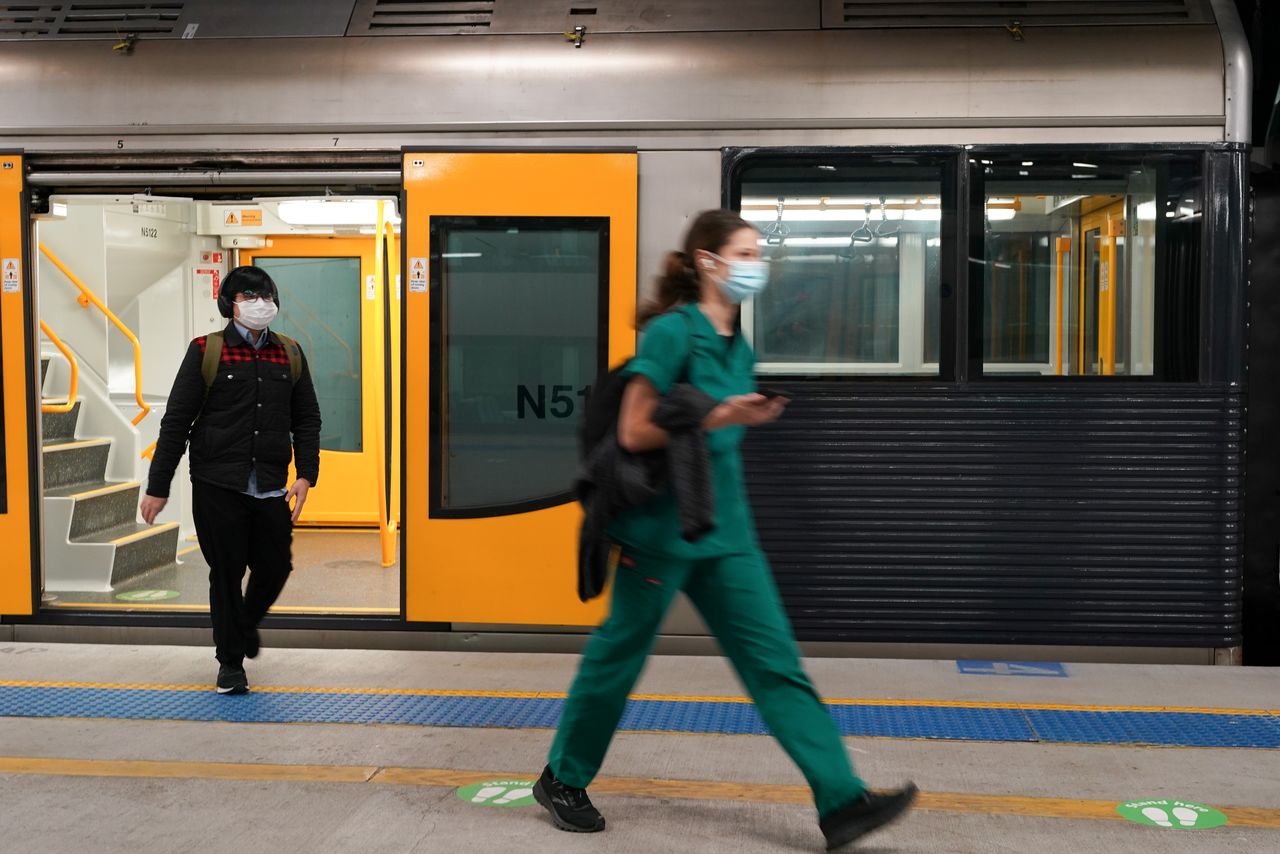 FILE PHOTO: Passengers wearing protective face masks walk across a train platform at the quiet Central Station in the city centre during a lockdown to curb the spread of a coronavirus disease (COVID-19) outbreak in Sydney, Australia, August 12, 2021. REUTERS/Loren Elliott

(Reuters) - Here is what you need to know about the coronavirus right now:

Hundreds more defence personnel will deploy next week to Sydney to help enforce the city's lockdown after authorities on Friday reported the biggest daily rise in COVID-19 cases from an outbreak which is spreading beyond Australia's largest city.

"Unfortunately, this trend (in cases) will continue for at least the next few days," New South Wales state premier Gladys Berejiklian told reporters in Sydney, the state capital.

It is becoming increasingly unlikely the city will end its nine-week lockdown on Aug. 28 as originally planned. Authorities are talking about easing some restrictions if enough people are vaccinated and case numbers fall.

The Philippines reported on Friday its second-largest daily increase in infections, providing more evidence of how the Delta variant may be spreading and ramping up pressure on the country's already stretched healthcare system.

Hundreds of hospitals in the country are nearing full capacity, with some facilities reporting they have run out of intensive care beds for COVID-19 patients.

The health ministry recorded 13,177 new infections on Friday, the highest since a record daily tally of 15,310 on April 2, bringing total cases to 1.71 million, the second highest in Southeast Asia after Indonesia.

Thailand could see coronavirus cases double to 45,000 per day by early next month, even with current lockdown measures in place, its COVID-19 taskforce said on Friday, as authorities urged people to stay home.

Thailand has been struggling with its worst outbreak so far, with a daily average of 20,000 new infections and 180 deaths in the past week, compared with 70 new cases and single-digit daily fatalities less than five months ago.

Japanese Prime Minister Yoshihide Suga on Friday urged people to refrain from travelling as cases spiked to new records in Tokyo and nationwide, heaping pressure on the medical system.

His comments follow health expert recommendations to strengthen states of emergency now in place in the capital and other hot spots.

Days after the end of the Tokyo Olympics, Paralympic organisers decided to hold the event mostly without spectators to limit infection risks, local media reported.

China on Friday reported declining numbers of new locally transmitted cases for a third consecutive day, a tentative sign that the latest month-long outbreak may be waning.

Many local cases in the current outbreak, the most widespread since the initial epidemic in the spring of 2020, have been traced back to a handful of infections uncovered in the city of Nanjing in eastern Jiangsu province in late July.

The U.S. Food and Drug Administration on Thursday authorized a booster dose of COVID-19 vaccines from Pfizer and Moderna for people with compromised immune systems.

Spurred by the Delta variant, coronavirus cases in the United States have spiked to their highest levels in more than six months, according to a Reuters tally.

The cities of San Francisco and New Orleans on Thursday ordered patrons to show proof of vaccination to enter restaurants, gyms and other venues, joining New York.