TAKEO, Japan (Reuters) -Torrential rain lashed much of Japan on Sunday, flooding roads and buildings in the western part of the country, while three people were feared dead after a landslide in central Nagano prefecture.

While the rain had stopped in much of Kyushu as of Sunday morning, Tokyo and other parts of the country were pounded by the downpour.

Japan "will continue to face conditions in which a large-scale disaster could occur at anytime, anywhere," Prime Minister Yoshihide Suga said at a ministerial meeting on Sunday. He called on local municipalities and relevant organisations to cooperate and act with speed on rescue missions and aid.

"We must be on high alert even in areas where the rain has tapered off," Suga added.

In Takeo, a city in Saga prefecture in Kyushu, entire roads were submerged as rescue workers in wetsuits dragged inflatable boats and surveyed the damage. Local residents carried broomsticks and buckets and waded knee-deep in water.

"I've experienced three floods like this so far, but this is the worst," said Toshimi Kusumoto, a 68-year-old doctor whose clinic was flooded.

Kusumoto waited out the rain with his family on the second floor of his house, he said, located just behind the clinic.

The water reached his house, too, meaning most of the appliances on the ground floor would have to be replaced. His garage was bent out of shape, presumably from the pressure of the water.

His son Daigo said their family was prepared for the flooding but was concerned over the frequency at which torrential downpours were pummelling the area, and was considering re-building his house to raise the ground level.

He had re-built the house only four years ago and it had seen two floods already.

"It's a bit much if it happens this frequently," Daigo said, as he hosed down the mud in front of the house.

In 2019, Takeo city was hit by a record downpour that killed three people. The government at the time estimated that such a deluge would only happen once every few decades.

"But what can you do?" said Toshimi, with a slight shrug.

Takayuki Haraguchi, 68, who works as a caretaker at a local sports centre, had come to survey the damage briefly when it was raining on Saturday.

"It looked no different from the sea," he said as he recalled what he saw on Saturday morning.

Hitomi Fuchino, 41, evacuated on a boat to a local middle school in Takeo city on Saturday morning after her house and second-hand clothes shop were immersed in water.

Her children lounged on a makeshift cardboard bed at the evacuation centre, while a pair of shorts were hung to dry in front of a fan.

Fuchino was not sure when she would return to her house given that more rain was being forecast.

"We can't really move at this point," she said wearily.

Elsewhere in Saga, 113 patients at a local hospital and 69 nursing home residents at the same site were evacuated to higher floors after flooding, public broadcaster NHK said. On Saturday, rescue workers in the prefecture had airlifted four residents using a helicopter in areas where the flooding was intense.

After a landslide hit a house in Okaya city in central Nagano, three people including a boy aged under 10 were found without vital signs while two others were injured, NHK said.

Separate to the Okaya case, NHK reported that as of midday on Sunday three people were confirmed dead nationwide due to the rains and four others were missing. 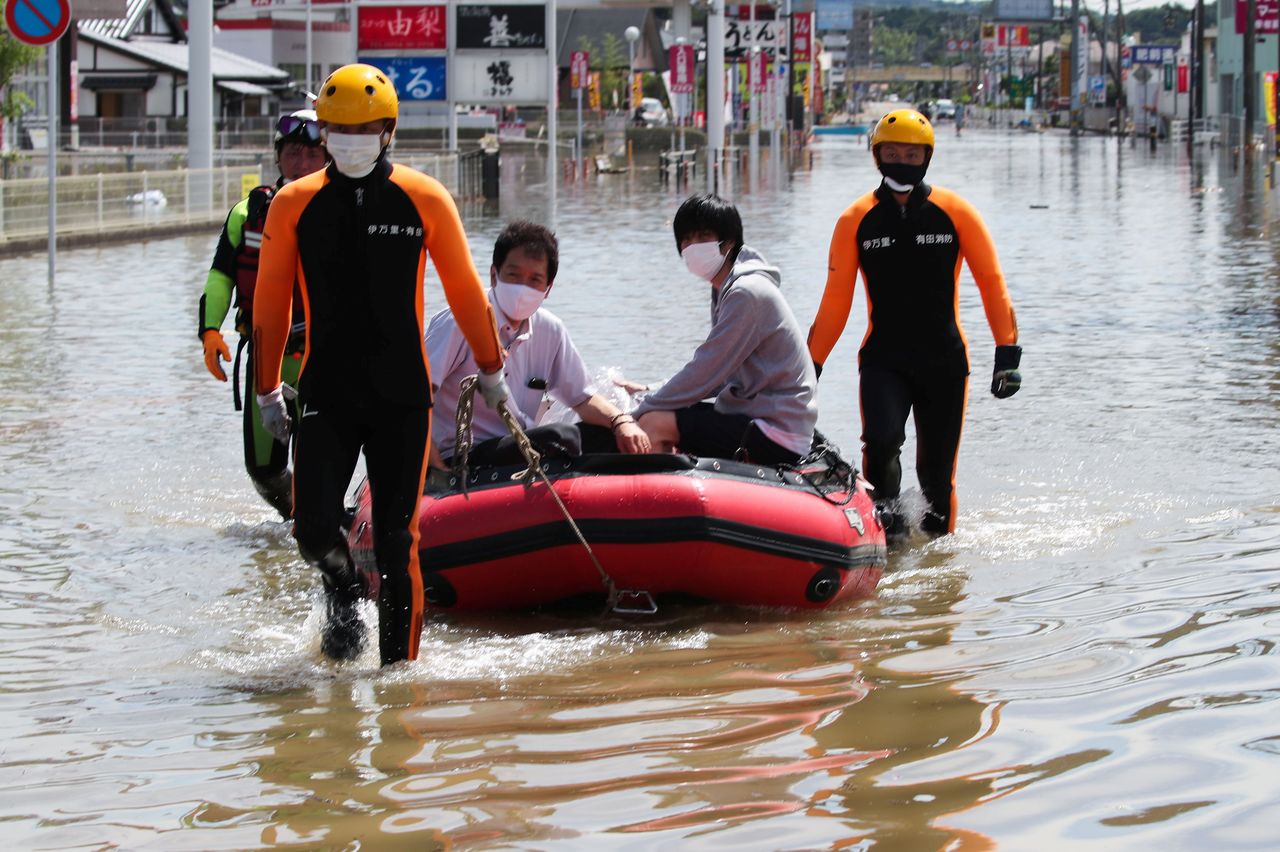 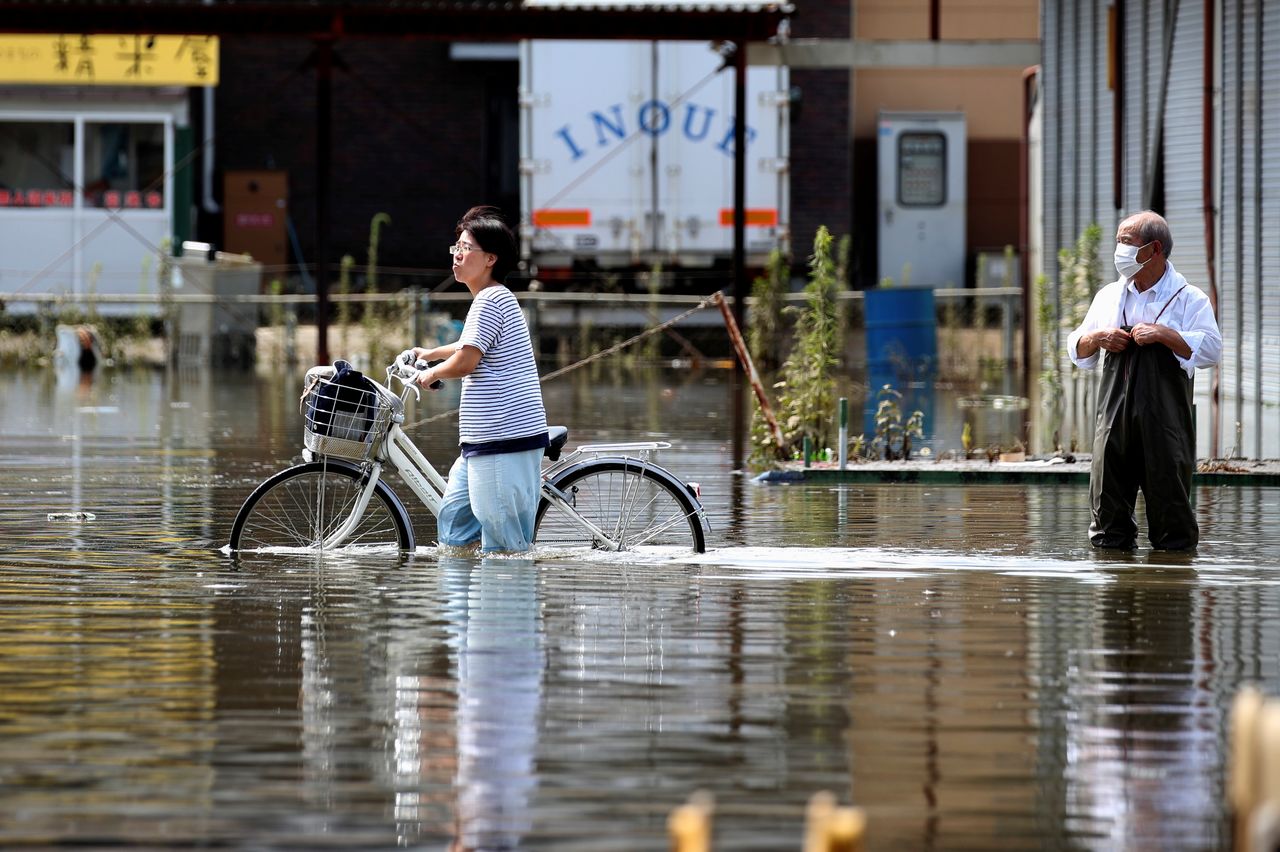 A woman pushes a bicycle through a flooded street as a man looks on, in Takeo, Saga Prefecture, western Japan, August 15, 2021. REUTERS/Kim Kyung-Hoon 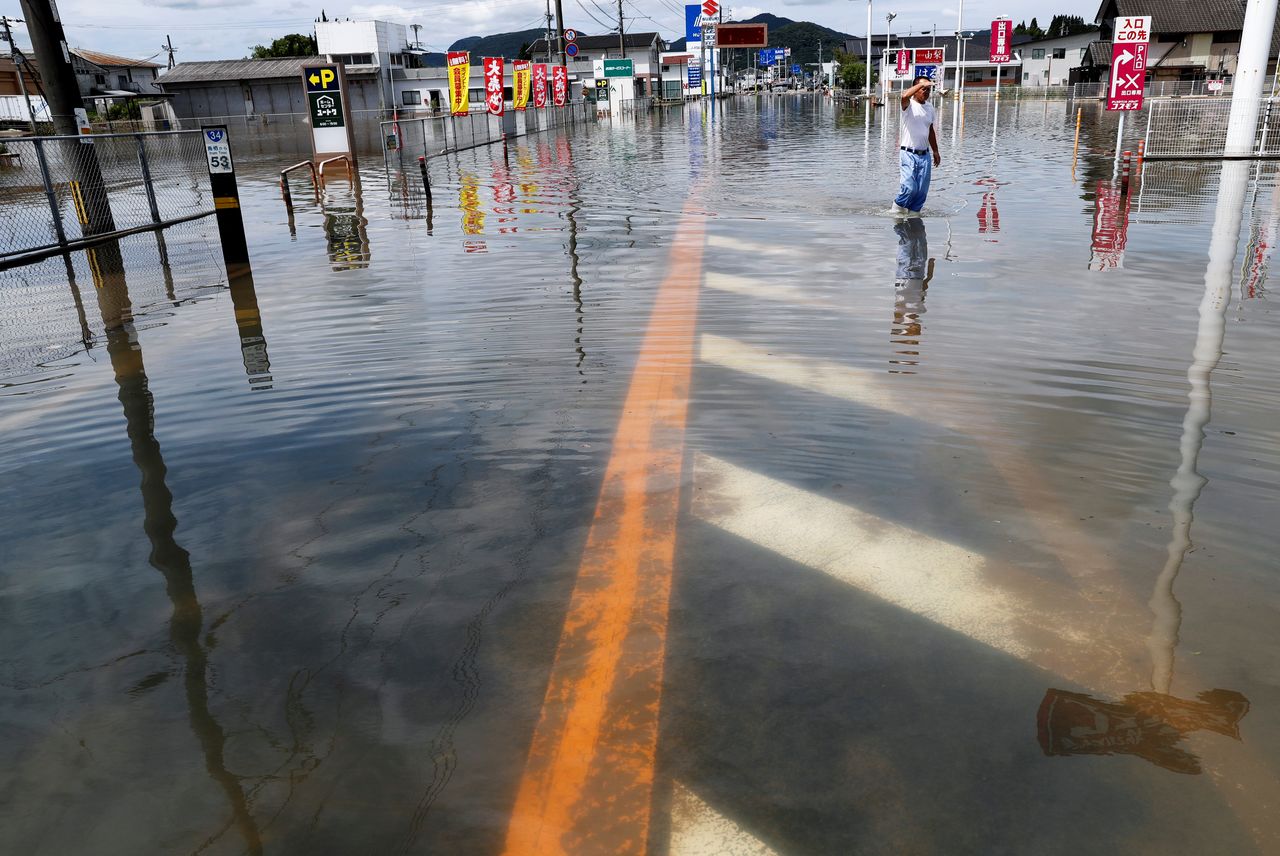 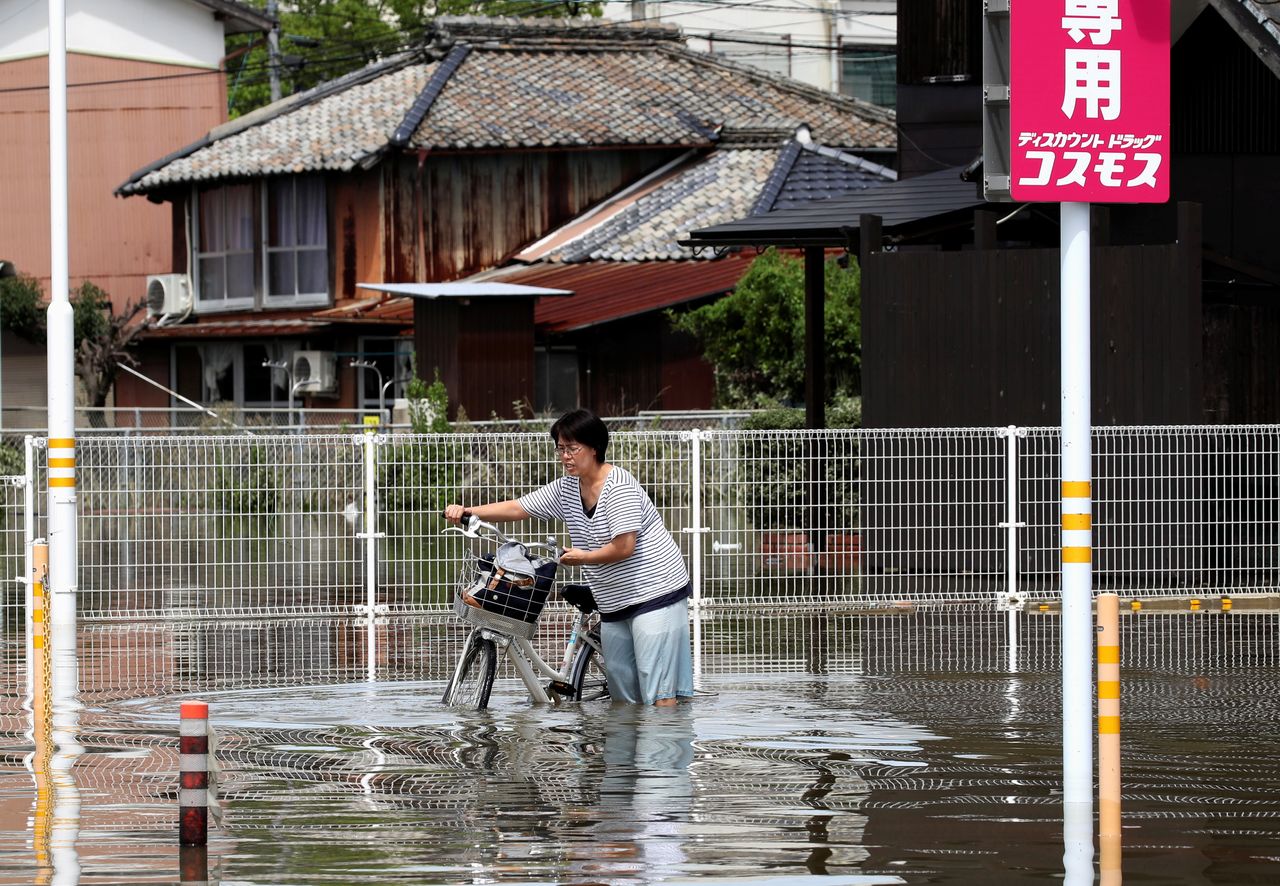