TOKYO (Reuters) -Japan will never wage war again, Prime Minister Yoshihide Suga pledged on Sunday, as he commemorated the end of World War Two while members of his cabinet visited a shrine https://www.reuters.com/world/asia-pacific/why-yasukuni-shrine-is-controversial-symbol-japans-war-legacy-2021-08-13 seen by critics as a symbol of the country's past militarism.

Nearly eight decades since the end of the war, the conflict remains a source of tension between Japan and its neighbours, particularly China and North and South Korea, with the Yasukuni shrine in central Tokyo a focal point for the strain.

"Since the end of the war, Japan has consistently walked the path of a country that values peace," Suga said in a speech at a memorial ceremony in Tokyo. "We must never again repeat the devastation of war. We will continue to remain committed to this conviction."

His comments were little changed from those of his predecessor, Shinzo Abe, at last year's ceremony. Emperor Naruhito again expressed "deep remorse" for Japan's wartime past, something Suga did not mention.

Earlier on Sunday, members of Suga's cabinet, as well as Abe, visited Yasukuni, gestures likely to anger China and both Koreas. Suga did not visit but sent a ritual offering through his secretary, the Sankei newspaper said.

A representative for Yasukuni declined to comment on whether the prime minister had sent an offering. No one was immediately available for comment at Suga's office outside regular working hours.

Yasukuni honours Japan's war dead, including 14 World War Two leaders convicted as "Class A" war criminals, making it a flashpoint for tension. Koreans still chafe over Japanese rule from 1910 to 1945, while the Chinese continue to resent Japan's invasion and brutal occupation of parts of China from 1931 to 1945.

Many Japanese pay respects to relatives at the shrine and conservatives say leaders should be able to commemorate the war dead. China and the two Koreas, however, have voiced objection given that war criminals are included among those honoured at Yasukuni.

The shrine saw a constant stream of visitors from early morning, including families with children and people in military uniform, in the face of persistent rain and a recent spike in novel coronavirus cases in Tokyo.

"Like any other year, I sincerely offered my heartfelt condolences to those who sacrificed their lives in the previous war and renewed my pledge for everlasting peace," Hagiuda told reporters.

When asked about the opposition from South Korea and China to visits by ministers, he said it was natural to pay respects to those who sacrificed themselves for their country, adding he hoped for understanding from Japan's neighbours.

South Korean President Moon Jae-in said his government remained open to dialogue with Japan to step up cooperation while seeking to resolve historical rows that have frayed bilateral ties.

In a sign of the shrine's symbolic potency, China's Association of Performing Arts called for a boycott of a Chinese actor after photos of him taken at Yasukuni in 2018 and 2019 circulated online and sparked outrage.

Abe visited Yasukuni as prime minister in 2013, leading to anger from Beijing and Seoul and an expression of "disappointment" from the United States. He did not go again as prime minister, sending ritual offerings instead.

After visiting on Sunday, the former prime minister, who is still a member of parliament, told reporters he paid his respect to the souls of the war dead. 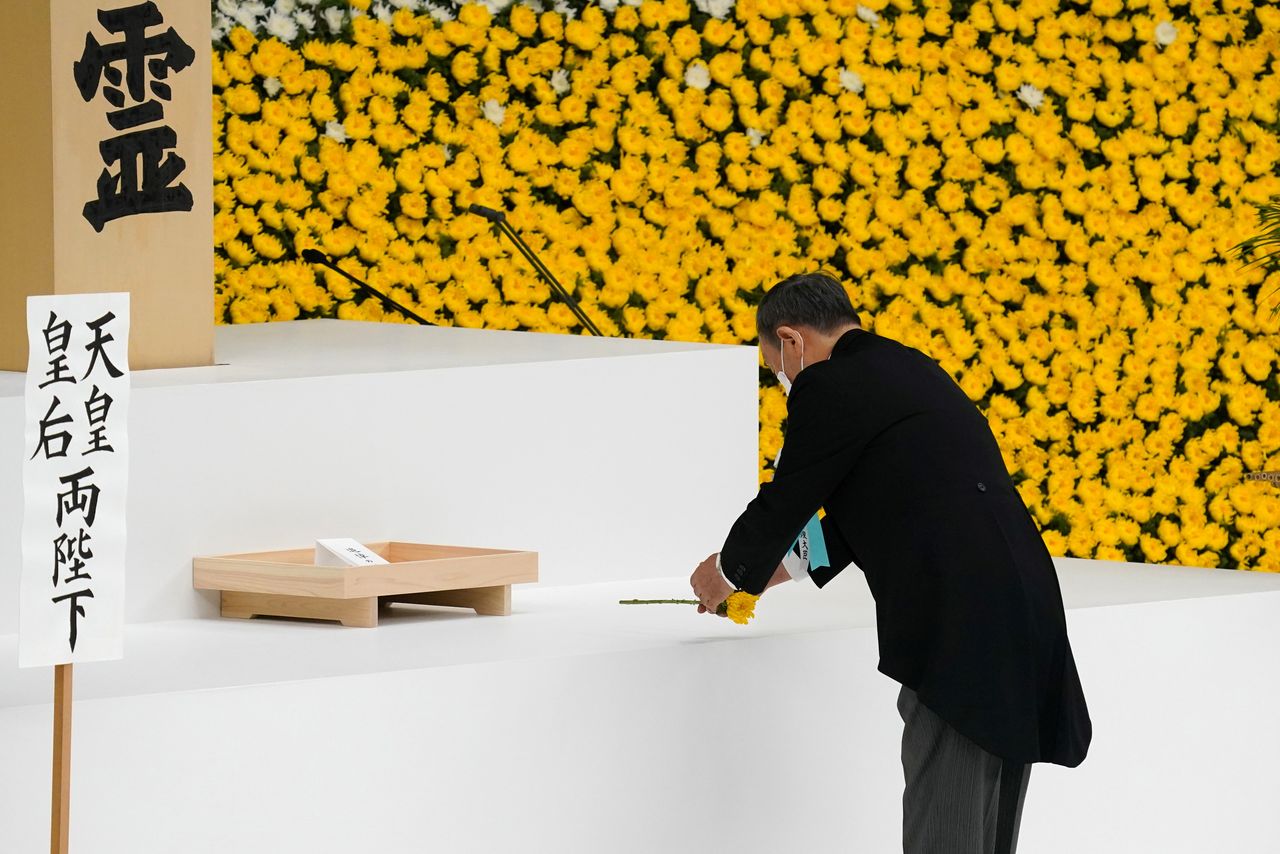 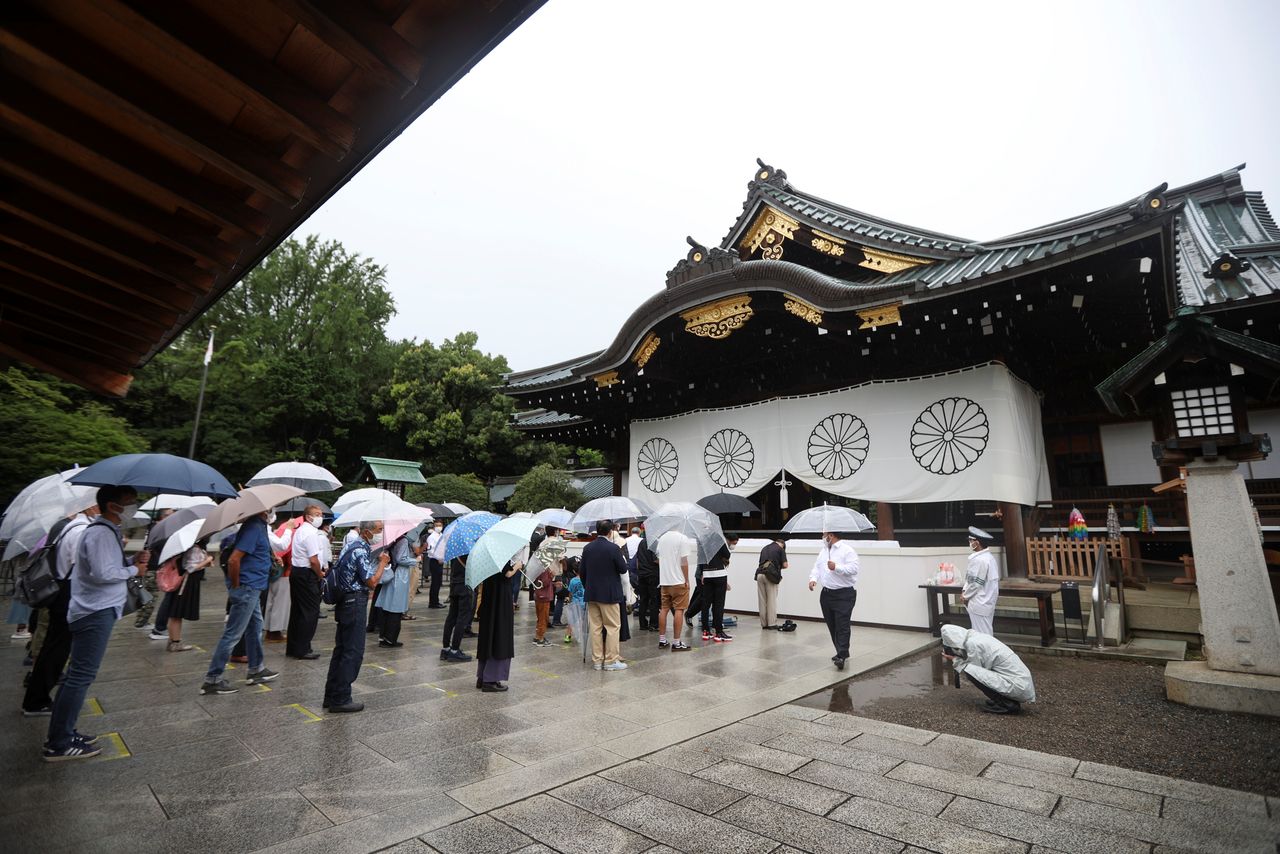 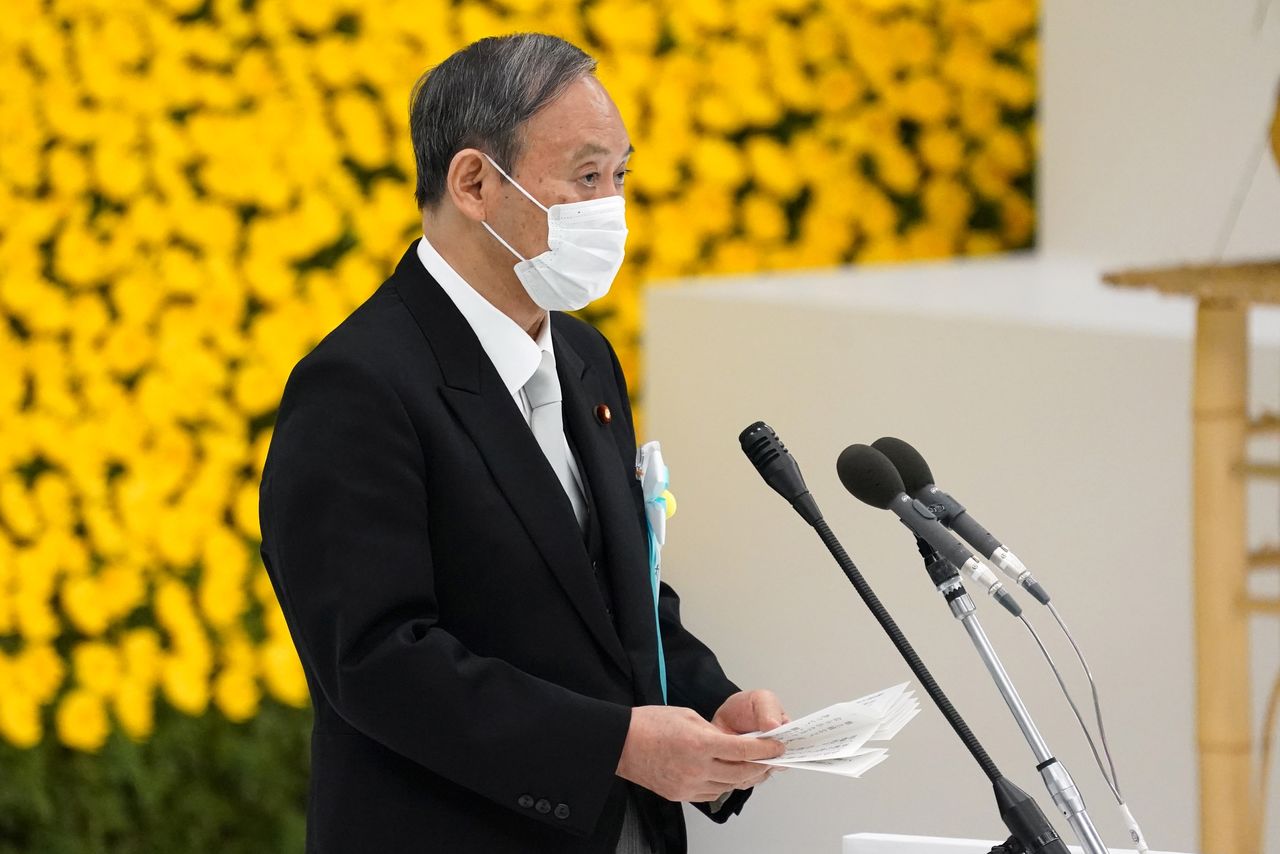 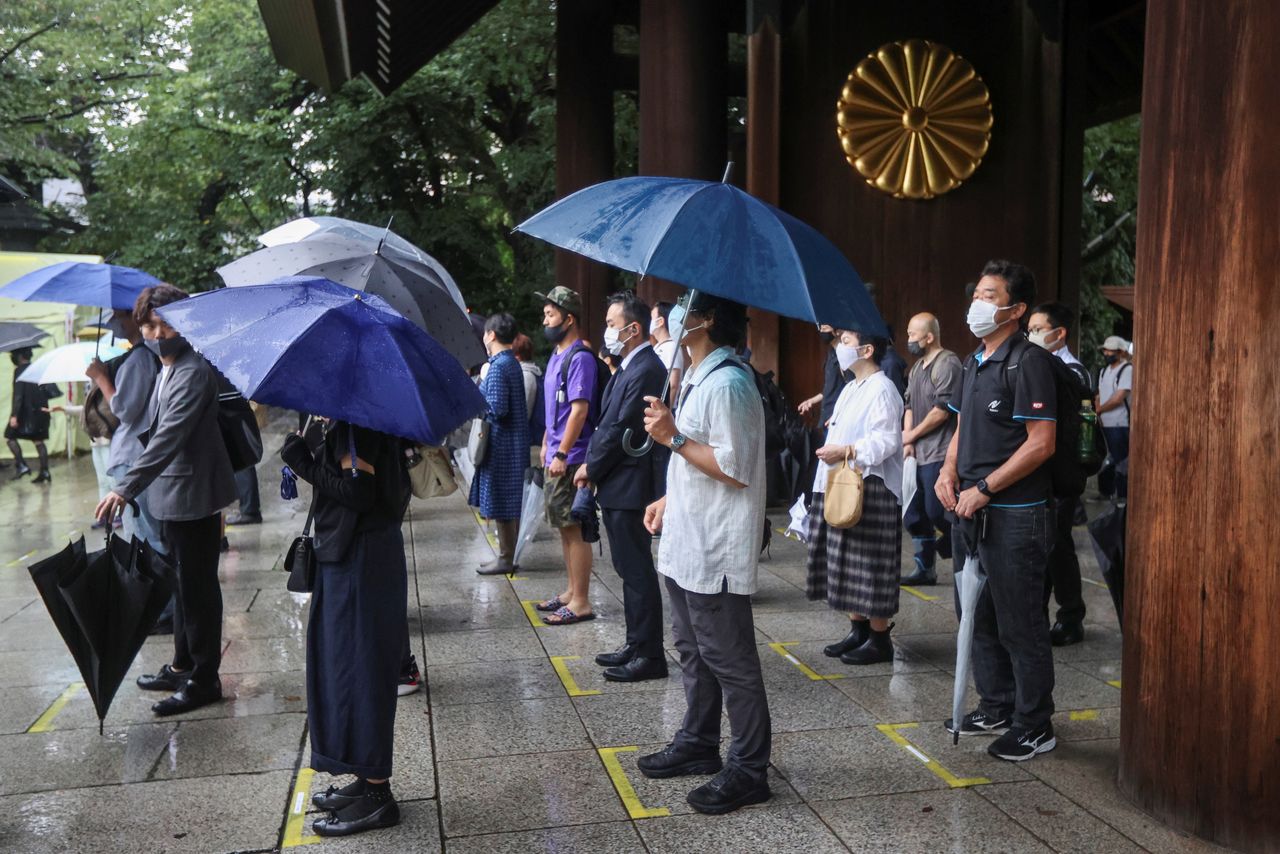 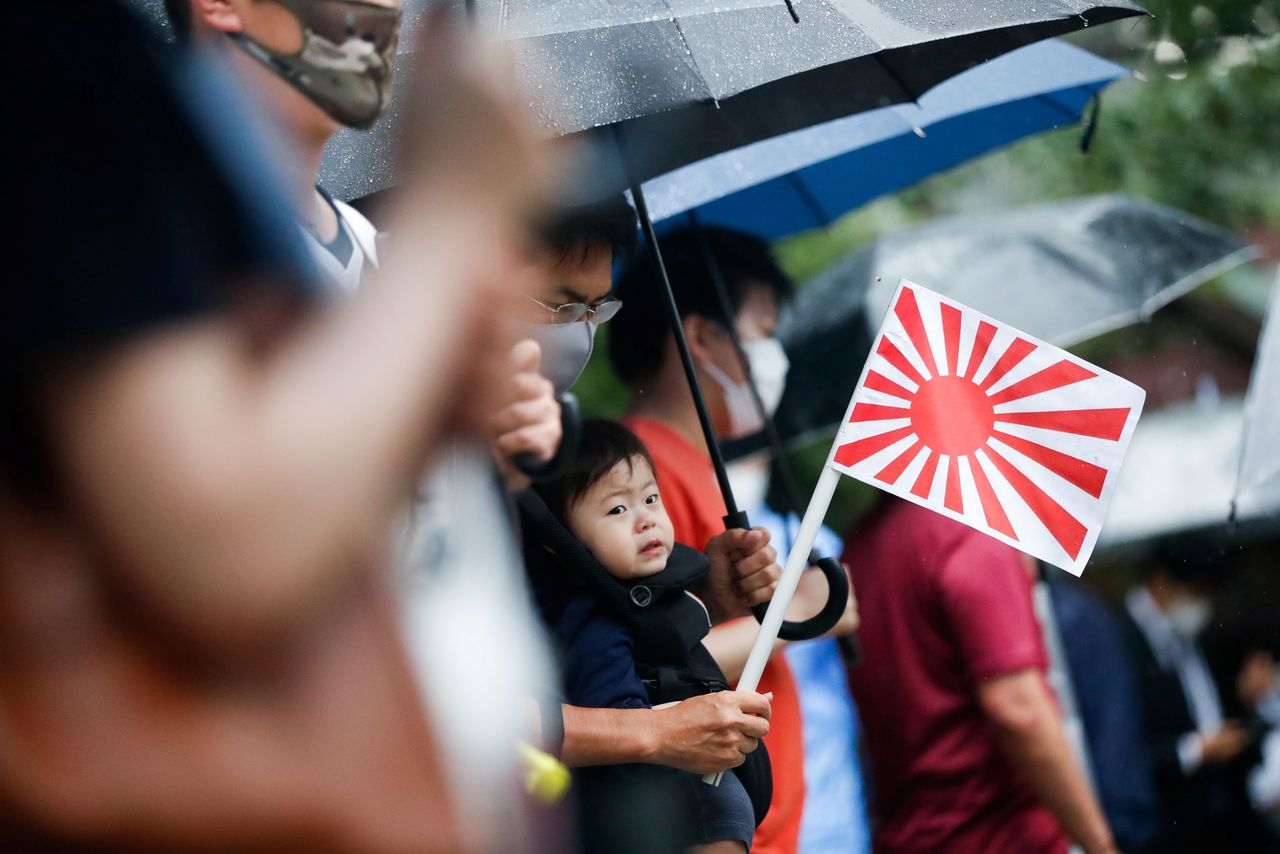 A father holding a rising sun flag carries his child during a visit to Yasukuni Shrine on the 76th anniversary of Japan's surrender in World War Two, amid the coronavirus disease (COVID-19) pandemic, in Tokyo, Japan August 15, 2021. REUTERS/Issei Kato