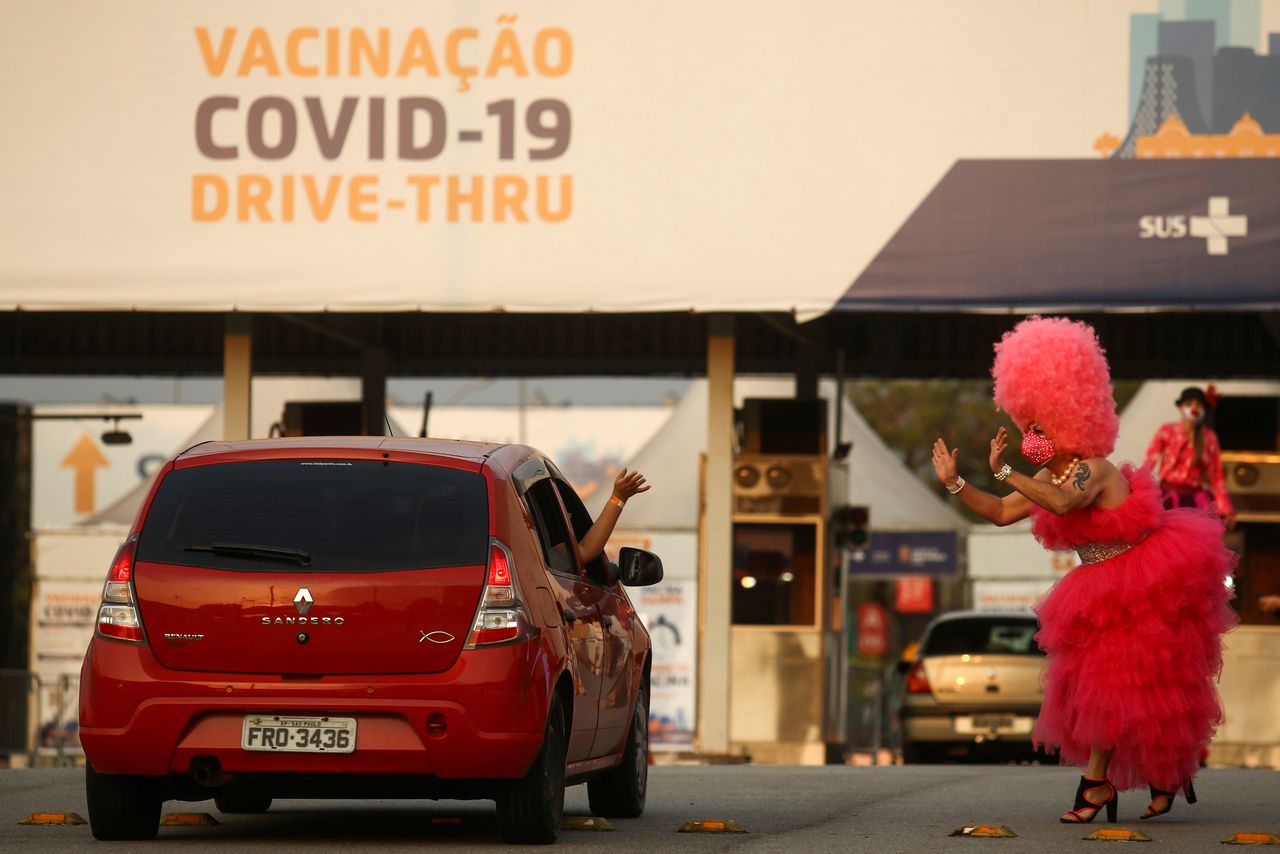 A drag queen waves to a car at a vaccine drive-thru as Sao Paulo begins to vaccinate young people from 18 to 21 years old against the coronavirus disease (COVID-19), in Sao Paulo, Brazil August 14, 2021. REUTERS/Carla Carniel TPX IMAGES OF THE DAY

Australia's biggest city Sydney recorded its deadliest day of the pandemic on Monday as troops and police set up roadblocks to limit the movement of people, while Melbourne faced a nightly curfew and a further two weeks of lockdown.

Sydney, which is in its eighth week of lockdown, is the epicentre of Australia's third wave of COVID-19 that threatens to push the country's A$2 trillion ($1.5 trillion) economy into its second recession in as many years.

New local infections in China declined for a sixth day, official data showed on Monday, as most regions got the latest outbreak under control, while others kept up vigilance by adding mass testing or delaying the reopening of schools.

Hong Kong said it would upgrade 15 overseas places including the United States, Spain and France to "high risk" from "medium risk" by Aug. 20, meaning international arrivals from those countries will face lengthened quarantine.

Taiwan has rejected an emergency use application for UBI Pharma's vaccine candidate, the government said on Monday, though the president said she would get a different domestic shot in a show of support for the drive to develop a local vaccine.

Although Taiwan has ordered millions of Moderna and AstraZeneca shots, developing a local vaccine has been a major goal and it is due next week to start administering its first domestic vaccine, made by Medigen Vaccine Biologics.

Explaining the rejection of the request for emergency use authorisation, the health ministry said the antibodies triggered by UBI's candidate did not match up with those of the AstraZeneca vaccine.

Cuba's public health minister said on Sunday that efforts were underway to restart the country's main oxygen factory which has broken down just as a Delta-driven surge in cases and deaths swamped some provincial health services.

Minister Jose Angel Portal's appearance on the state's midday news broadcast came after the death toll in Cuba from COVID-19 hit 98 on Saturday, equal to the pandemic record.

Daily cases are averaging between 8,000 and 9,000 with fatalities at nearly 1% of cases, low by international standards but high for Cuba which had a death rate of 0.67% last year.

Brown, prime minister from 2007 to 2010, has been leading a push for richer countries to share more of the cost of vaccinating people in developing countries, many of which have low inoculation rates and rising cases.