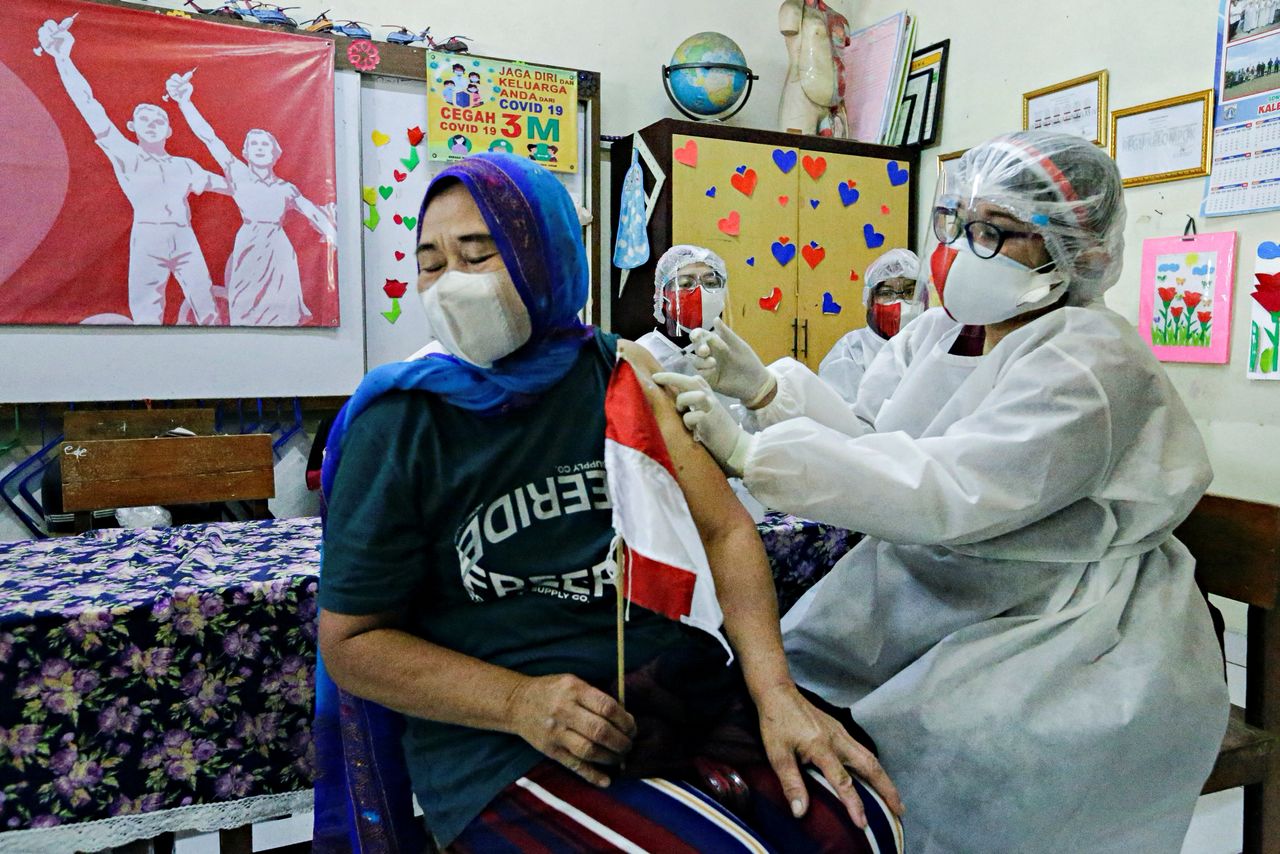 A woman reacts as she receives a dose of the coronavirus disease (COVID-19) vaccine during a vaccination program in Jakarta, Indonesia, August 17, 2021. REUTERS/Ajeng Dinar Ulfiana

Prime Minister Jacinda Ardern put New Zealand under strict lockdown on Tuesday after the country's first coronavirus case in six months was reported in the largest city of Auckland.

Cases are set to "rise substantially" in Sydney in the coming weeks despite a prolonged lockdown, authorities in Australia said on Tuesday, warning soaring infections have already put hospitals under enormous strain.

Japan on Tuesday extended its state of emergency in Tokyo and other regions and announced new measures covering seven more prefectures to counter a spike in cases threatening the medical system.

The current state of emergency, the fifth of the pandemic so far, was due to expire on Aug. 31 but will now last until Sept. 12. Tokyo announced 4,377 new cases on Tuesday, after a record 5,773 on Friday.

The state of emergency will now cover nearly 60% of Japan's population, as the prefectures of Ibaraki, Tochigi, Gunma, Shizuoka, Kyoto, Hyogo and Fukuoka are included. Less strict "quasi-emergency" measures will be applied to a further 10 prefectures.

India administered more than 8.8 million doses of COVID-19 vaccines in the past 24 hours, government data showed on Tuesday, close to its all-time record and speeding up a campaign to inoculate all eligible adults by December.

The surge in inoculations came alongside a sharp decline in daily new infections that fell to 25,166, the lowest since March 16, the health ministry said.

India has undertaken one of the world's largest COVID-19 vaccination drives and has so far administered 554 million doses, giving at least one dose to about 46% of its estimated 944 million adults. Only about 13% of the population have had the required two doses.

The Biden administration plans to begin administering booster shots to Americans as early as mid or late September, pending authorization from the U.S. Food and Drug Administration, a source familiar with the discussions told Reuters late on Monday.

Health officials gathered round the view that most people should get a booster shot eight months after they completed their initial vaccination, the source said.

Thailand will purchase an additional 12 million doses of Sinovac's vaccine to try to expedite its rollout, a senior official said on Tuesday, despite concerns over its efficacy against the Delta variant.

Thailand's strategy had planned to use mainly locally produced AstraZeneca vaccines but with supply short of the government's target, Sinovac shots are being used in a mix-and-match approach to inoculate the population faster.

The risk of Bell's Palsy, a type of facial paralysis, is higher after Sinovac’s vaccine CoronaVac, but should not be a deterrent to vaccination, according to a study published in The Lancet Infectious Diseases journal.

"The beneficial and protective effects of the inactivated COVID-19 vaccine far outweigh the risk of this generally self-limiting adverse event," the study mentioned.