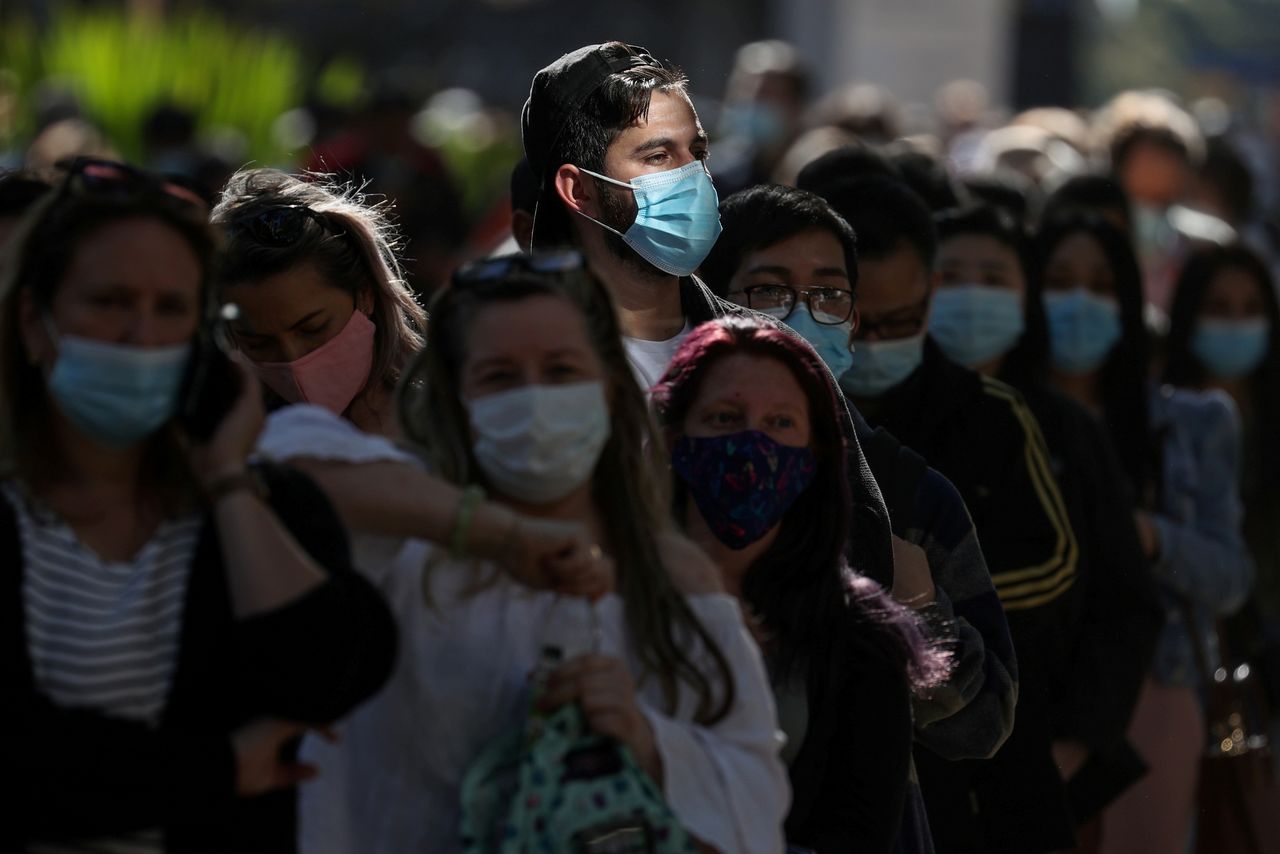 FILE PHOTO: People wait in line outside a coronavirus disease (COVID-19) vaccination centre at Sydney Olympic Park during a lockdown to curb the spread of an outbreak in Sydney, Australia, August 16, 2021. REUTERS/Loren Elliott

A British public health study has found that protection from either of the two most commonly used COVID-19 vaccines against the now prevalent Delta variant of the coronavirus weakens within three months.

It also found that those who get infected after receiving two shots of either the Pfizer-BioNTech or the AstraZeneca vaccine may be of greater risk to others than under previous variants.

Based on more than three million nose and throat swabs taken across Britain, the Oxford University study found that 90 days after a second shot of the Pfizer or Astrazeneca vaccine, their efficacy in preventing infections had slipped to 75% and 61% respectively.

Australia reported its biggest one-day rise in infections on Thursday, as authorities began doling out emergency supplies of vaccine in the Sydney suburbs worst hit by an outbreak of the Delta strain.

Officials allocated more than half an emergency supply of Pfizer vaccines bought from Poland, or about 500,000 doses, to the city's dozen worst-affected suburbs where they will be given to those younger than 40 over the next two weeks.

New Zealand's cases jumped on Thursday, as questions grew about the government's response to the pandemic given the slowest vaccination rate among developed countries and the economic pressures of prolonged isolation.

South Korea reported more than 2,000 new cases for the second time on Thursday as it struggles to subdue a wave of outbreaks during the summer holidays, driven by the Delta variant.

South Korea has managed to tackle outbreaks since its epidemic began early last year thanks to intensive testing and tracing but it is now facing persistent spikes in infections and vaccine shortages.

The Korea Disease Control and Prevention Agency reported 2,152 cases for Wednesday, the second highest since the pandemic began, after the daily tally topped 2,200 for the first time last week. Total infections rose to 230,808, with 2,191 deaths.

Thailand is studying the possibility of injecting coronavirus vaccines under the skin to try to stretch its limited supply, a health official said on Thursday, as the country races to inoculate the public faster amid a worsening epidemic.

"Our previous experience shows that intradermal injections use 25% of a muscular injection, but trigger the same level of immunity," head of the medical science department Supakit Sirilak told reporters.

Singapore will allow quarantine-free entry from next month to travelers from Germany and Brunei who are vaccinated against COVID-19, its aviation regulator said on Thursday, as part of a plan to gradually reopen its borders.

Visitors from those countries can from Sept. 8 bypass the isolation requirement if they test negative in four polymerase chain reaction tests.

Border restrictions will also be progressively eased for all travel from Hong Kong and Macau from this Saturday, the Civil Aviation Authority of Singapore said.